The Horn of Plenty

With the Cobra’s case open the largest and most obvious component is, as you might have guessed, the radar detector itself. Or more accurately, the metallic waveguide of the detector. This structure, often called the “horn” for fairly obvious reasons, funnels the radar waves down into the detector circuitry. You’ll note here that there’s only a single wave guide, and it faces forward; this unit would have limited ability to detect radar from any other direction than directly ahead, which was typical until they started adding more wave guides on higher end models later on. 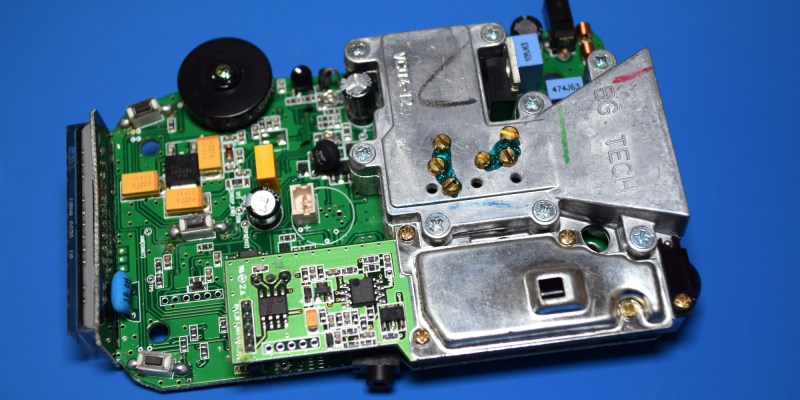 Another interesting note are the set screws directly behind the horn. These allow adjusting the resonant frequency of the detector cavity, and once they were set to the appropriate lengths at the factory, an adhesive was applied to the top to make sure they didn’t rotate from vibration. Upon opening the wave guide itself, you can see that the length of these screws actually varies wildly. Combined with the fact that there are open holes for additional unused screws to be installed in, it would seem that there was considerable variation between detectors that needed to be manually addressed during the QA process.

Behind the set screws and located 90 degrees from the face of the horn itself is the superheterodyne receiver. According to the manual it can detect frequencies from the X band at 10.5 GHz all the way up to Ka band at 34.7 GHz. Owing to the amount of high frequency RF Dark Arts that are happening on this 20 mm long board, the construction techniques and even the substrate used on this PCB are markedly different from the rest of the device.

Located under a shield slightly smaller than the radar waveguide housing is the infrared laser detector. This component is actually a separate module, complete with a header that allows it to be easily swapped out once the screws holding it down are removed. It could be that laser detection technology was considered such a moving target at the time that Cobra wanted to keep it as a separate module, allowing them to potentially improve that particular capability down the line without having to redesign the entire board. It’s also possible that a cheaper version of the Cobra XRS 9740 was available that didn’t have the laser capability. In either event, it would be interesting to take a peek inside of other detectors from the era to see if this was a common trait.

The main components on this module are the PIC12F629 microcontroller on the far left and BA10358 operational amplifier to the right of it. Unfortunately the dual IR detectors, one mounted on the front of the board to align with the radar horn and the other mounted flat on its back and facing a lens assembly on the top of the device, don’t have any identifying markings. That said, the two-pin sensors look suspiciously like the sort of IR detectors you’d see in an old mouse.

The display aficionados in the audience have been waiting patiently, and now it’s their turn. Along the back edge of the Cobra XRS 9740, diffused with a piece of smoked black plastic, is an absolutely gorgeous eight character alphanumeric LED display in that perfect shade of Matrix green.

It turns out this is a HCMS-2973, a well documented display that’s even supported by a couple of Arduino libraries. These are normally pretty pricey, selling for $10 to $20 used and currently listed for $36 a pop on Digi-Key. That’s more than these old radar detectors often go for on eBay (to say nothing of flea market finds), so if you don’t mind spending some quality time with the desoldering wick, you could potentially turn a profit just by snapping up old detectors and reselling their screens.

In this case the HCMS-2973 lives on a small daughter-board that allows it to be mounted vertically. The fine people at Cobra even went through the trouble of sorting out the display’s somewhat unusual pin arrangement and broke out the five lines you need to actually drive it to solder pads along the edge of the board. Very thoughtful of them. 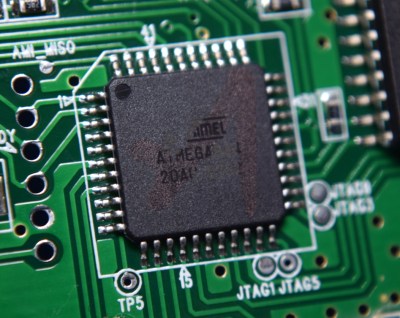 On the flip side of the Cobra’s main PCB, we find a relatively familiar face: an ATmega644 microcontroller. Next to the 44-pin TQFP packaged chip are helpfully labeled JTAG points and what appears to be an unpopulated programming header.

Seeing not one but two recognizable microcontrollers is certainly refreshing considering how many miserable epoxy blobs we run into these days. Admittedly there aren’t a lot of folks chomping at the bit to hack a radar detector from the early 2000s, but assuming there was sufficient interest, let’s theorize a bit here.

Following the traces, the PIC in the laser module is connected directly to the I/O pins on the ATmega. A logic analyzer placed between them should reveal in relatively short order whatever whispered secrets the pair of microcontrollers are sharing with each other. That’s half of the device’s functionality right there. Getting the display working wouldn’t be a problem either, the HCMS-2973 is a standard component, and it to can be traced directly back to the pins on the ATmega. 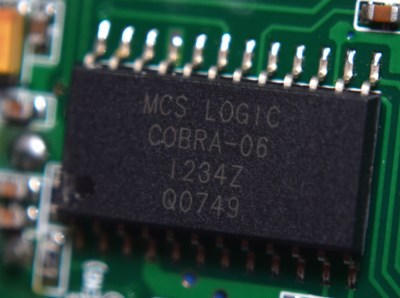 So what stands between the Cobra XRS 9740 and an open source replacement firmware for freedom-loving speedsters? Well, the big chip labeled “MCS LOGIC COBRA” might have something to say about it.

Any effort to create a custom firmware for the device would have to involve reverse engineering whatever this chip is doing. If Cobra went through the trouble of getting the chips manufactured, especially in a device that otherwise doesn’t seem to have a problem using off-the-shelf components, it’s probably used for some radar groking magic they wanted to keep close to the vest.

Of course, this is a bit of an oversimplification. There’s a handful of other unidentified chips lurking around the PCB that would need to be dealt with as well. Getting the classic “Hello World” running on the display might only be an afternoon’s worth of tinkering, but the difficulty really ramps up from there. If anyone feels like challenging themselves, it seems like there’s enough pieces here to conduct a fascinating open source experiment. Ultimately it might just boil down to how far a free software fanatic is willing to go keep the Smokey off his tail.