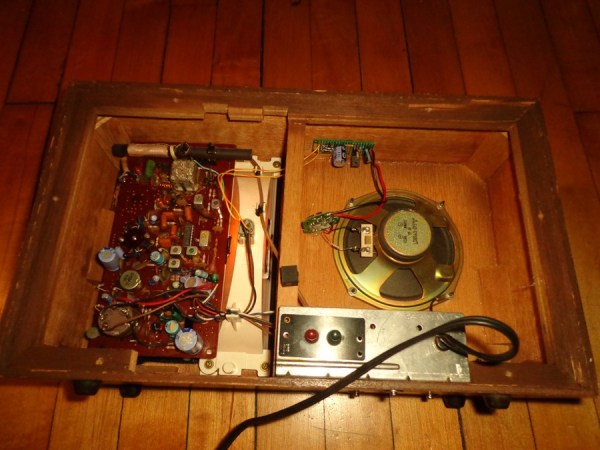 In a world full of products that are only used for a brief time and then discarded, it gives a lot of us solace to know that there was a time when furniture was made out of solid wood and not particle board, or when coffee makers were made out of metal and not plastic. It’s hard to say exactly what precipitated the change to our one-time-use culture, but in the meantime there are projects that serve to re-purpose those old, durable products from another time so that they can stay relevant in today’s ever-changing world. [Jose]’s new old radio is a great example of this style of hack.

[Jose] had a 1970s-era single-speaker radio that he found in a thrift store. The first thought that he had to get the aesthetically pleasing radio working again was to install a Bluetooth receiver into the radio’s amplifier. This proved to be too time-consuming of a task, and [Jose] decided to drive the Bluetooth module off of the power circuit for the light bulb. He built a 6V AC to 4.2V DC circuit, swapped over the speaker cable, and started listening to his tunes. The modifications he made aren’t destructive, either. If he wants, he will be able to reconnect the original (and still functional) circuitry back to the speaker and pretend he’s back in 1970.

While this isn’t the most intricate hack we’ve ever featured, it’s always refreshing to see someone get use out of an old piece of technology rather than send it off to the landfill with all of our Pentium IIs or last year’s IKEA shelves that have already fallen apart. And even if the 70s aren’t your era of choice, perhaps something newer will inspire you to bust a move.

For those of us who grew up during TI’s calculator revolution, the concept of reverse polish notation (RPN) might be foreign. For other more worldly calculator users, however, the HP calculator was ubiquitous. Hewlett-Packard peaked (at least as far as calculators are concerned) decades ago and the market has remained dominated by TI since. Lucky for those few holdouts there is now a new microcode emulator of these classic calculators.

Called the NP25 (for Nonpariel Physical), the calculator fully emulates the HP-21, HP-25C and HP-33C. It’s a standalone microcode emulator, which means that these calculators work exactly as well as the original HP calculators of the 70s did. The new calculators, however, are powered by a low power MSP430G2553 processor and presumably uses many, many fewer batteries than the original did. It has an LED display to cut power costs as well, and was built with the goal of being buildable by the average electronics hobbyist.

Even if you didn’t grow up in the 70s with one of these in your desk drawer, it’d still be a great project and would help even the most avid TI user appreciate the fact that you don’t have to use RPN to input data into calculators anymore. Not that there’s anything wrong with that. This isn’t the only calculator we’ve featured here, either, so be sure to check out another free and open calculator for other calculator-based ideas.