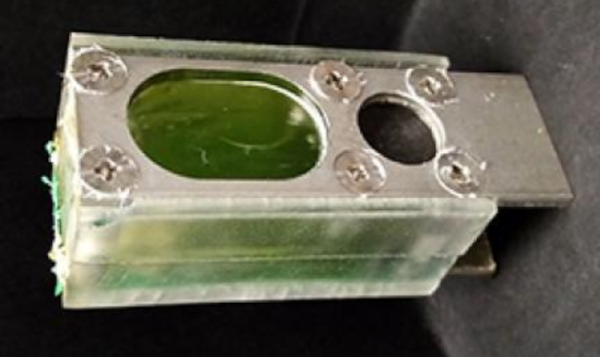 What’s the size of an AA battery and can run an ARM Cortex M0+ for six months? Well… probably an AA battery, but obviously, that wouldn’t be worth mentioning. But researchers at Cambridge have built a cell of blue-green algae that can do the job.

As you might expect, the algae need light, since they generate energy through photosynthesis. However, unlike conventional solar cells, the algae continue to produce energy in the dark at least for a while. Presumably, the algae store energy during the day and release it at night to survive naturally-occurring periods of darkness.

Generating power from photosynthesis isn’t a new idea since photosynthesis releases electrons. A typical cell has gold electrodes and a proton exchange membrane of some kind. You can see a video from Cambridge below about generating electricity from photosynthesis. Keep in mind, of course, that the Cortex M0+ is capable of very low power operation. Don’t look for that algae-powered spot welder anytime soon.

People tend to get fixated on electricity as energy, but there are other ways to harness photosynthesis. For example, we’ve seen algae fueling a chicken hole in the past. Not to mention we’ve seen algae used to power a robot in a novel and non-electrical way.

END_OF_DOCUMENT_TOKEN_TO_BE_REPLACED 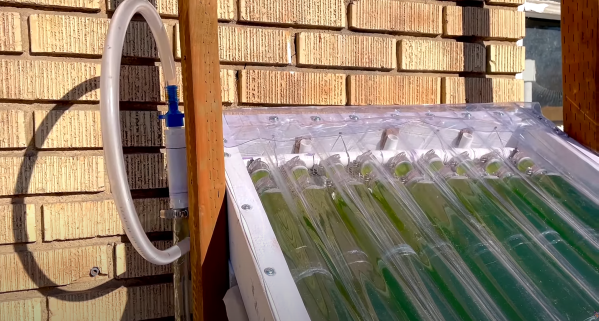 [Cody] of Cody’sLab has been bit by what he describes as the algae growing bug. We at Hackaday didn’t know that was a disease floating around, but we’ll admit that we’re not surprised after the last few years. So not content to stick to the small-time algae farms, [Cody] decided to scale up and build a whole algae panel.

Now, why would you want to grow algae? There are edible varieties of algae, you can extract oils from it, and most importantly, it can be pumped around in liquid form. To top it off, all it needs is just sunlight, carbon dioxide, and a few minerals to grow. Unlike those other complicated land-based organisms that use photosynthesis, algae don’t need to build any structure to hold themselves up or collect sunlight; it floats.

The real goal of the algae is to build a system known as “Chicken Hole.” The basic idea is to have a self-sufficient system. The algae feed the insects, the insects feed the chickens, and so on up the chain until it reaches [Cody]. While glass would make an ideal material for the algae tubes, plastic soda bottles seem like a decent proxy for a prototype and are much cheaper. He connected around 100 half-liter bottles to form long tubes and a PVC distribution system. The algae needs to be pumped into an insulated container to prevent it from freezing at night. At first, a simple timer outlet controlled the pump to only run during the day, draining it via gravity at night. However, the algae can’t heat up enough when running on cloudy, cold winter days, and it cools off. A solar panel and a temperature sensor form the logic for the pump, with a minimum temperature and sunlight needed to run.

[Cody] mentions that he can expect around 10 grams of algae per day on a panel this size in the winter. He’s going to need quite a few more if he’s going to scale up properly. Perhaps in the future, we’ll see panels growing algae robots? Video after the break.

END_OF_DOCUMENT_TOKEN_TO_BE_REPLACED 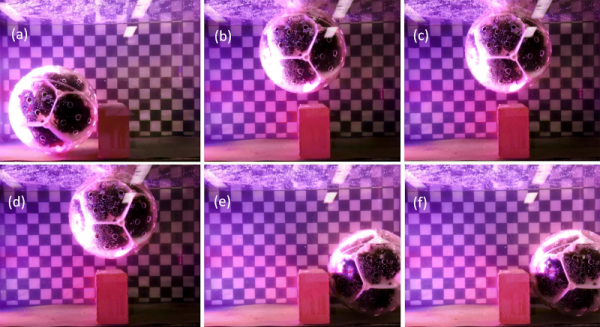 END_OF_DOCUMENT_TOKEN_TO_BE_REPLACED

There’s a famous scene in the movie version of Frankenstein — but not in the book — where the doctor exclaims: “It’s alive!” We wonder if researchers at TU Delft had the same experience after printing living structures using algae. Of course, they aren’t creating life or even reanimating it. They are simply depositing living cells in artificial structures using a bio-compatible substrate. According to the paper, the living cells or bio ink can build up layers in a 3D printing fashion and the structures are “self-standing.”

There are some advantages, for example that the algae get their energy from sunlight. Of course they also have to eat, so unless you provide some snacks, your print will die off in about 3 days.

END_OF_DOCUMENT_TOKEN_TO_BE_REPLACED 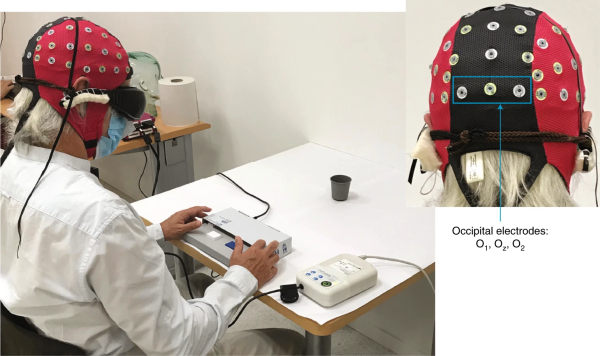 What are single-celled organisms good for, you may wonder? Science has found a wonderful new use for one of them — restoring partial sight to people with inherited forms of blindness. More specifically, they took a gene from algae that responds to light and moves toward it in order to replace dead or defective photo-receptor cells that lie between the human pupil and the optic nerve. 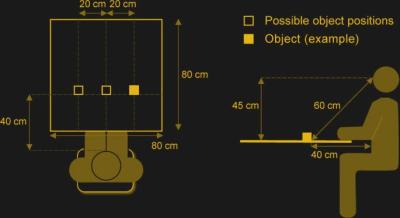 When light enters the eye, it triggers photo-receptor cells that in turn send signals to nerve cells called ganglions. These add information about motion and send the complete picture to the brain via the optic nerve. The researchers basically hacked the ganglion cells and turned them into photo-receptors. First they used a virus to get light-sensing molecules called chrimson into one of the retinas of the lone volunteer they’d managed to train before the pandemic. He’d been wearing the goggles out on walks and told them he could see the stripes of the crosswalk.

They were able to get him into the lab in summer 2020, where he donned a pair of goggles that register light changes and send amber light into the eye whenever that happens. He also wore a cap full of electrodes so the researchers could see what parts of his brain lit up when the goggles do their thing. With the goggles on and ready to fire, the man was able to distinguish whether a black cup was in front of him, and was even able to count multiple cups correctly most of the time. Although this is not a full restoration of vision, it’s an excellent development in that direction, and we’re excited to see where it goes.

In the future, the researchers hope to slim down the goggles into something more fashionable. Combine them with these camera-enabled shoes, and accessibility goes way up.

Thanks for the tip, [foamyguy]! 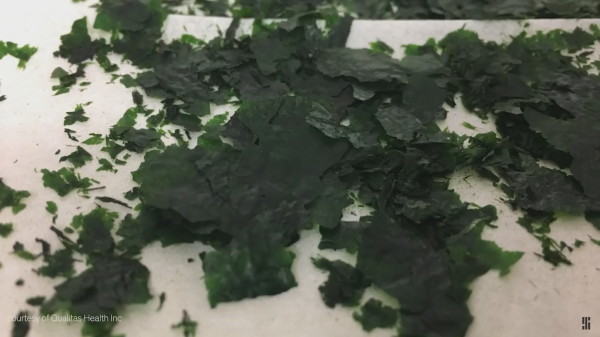 For those of us who grow up around natural swimming holes, algae are the reason we have to wash after taking a dip. Swimmer’s itch* or just being covered in green goop is not an attractive way to spend an afternoon. Lumping all algae together is not fair, some of it is nasty but some of it is delicious and humans have been eating it for generations.

If you are thinking that cases of algae cuisine are not widespread and that algae does not sound appealing, you are not alone. It is a tough sell, like convincing someone to try dandelions for the first time. It may not warrant a refrigerator section in the grocery store yet, but algae can produce protein-rich food which doesn’t require a lot of processing.

Currently, there is a lot of work to be done to bring up the efficiency of algae farms, and Qualitas has already started. The leaps they are making signify just how much room we have for improvement. The circulating paddle wheels, which can be seen in the video below the break, use one-third of the energy from their previous version. Their harvester uses one-thirtieth! Right now, their biggest cost comes from tanks of carbon dioxide, which seems off given that places such as power plants pay to get rid of the stuff. That should give some food for thought.

The 2018 Hackaday prize could use some algal submissions and you could take that to the bank. Ready to start growing your own algae, automate the process. It may also keep you from tripping while walking to the grocery store, or you can print with it.

END_OF_DOCUMENT_TOKEN_TO_BE_REPLACED 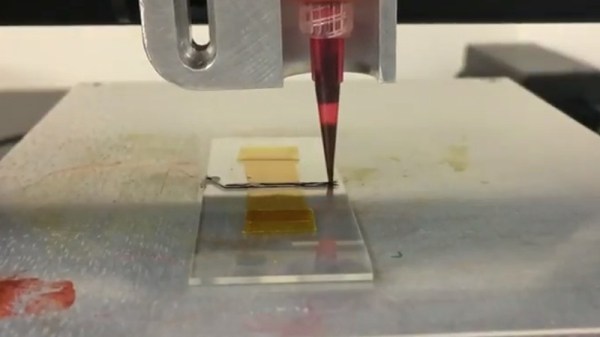 In case you missed it, prices on 3D printers have hit an all time low. The hardware is largely standardized and the software is almost exclusively open source, so it makes sense that eventually somebody was going to start knocking these things out cheap. There are now many 3D printers available for less than $300 USD, and a few are even dipping under the $200 mark. Realistically, this is about as cheap as these machines are ever going to get.

A startup by the name of 3D Cultures has recently started capitalizing on the availability of these inexpensive high-precision three dimensional motion platforms by co-opting an existing consumer 3D printer to deliver their Tissue Scribe bioprinter. Some may call this cheating, but we see it for what it really is: a huge savings in cost and R&D time. Why design your own kinematics when somebody else has already done it for you? 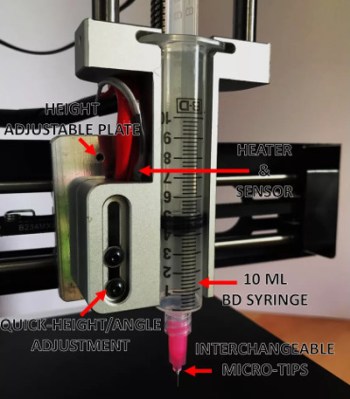 Despite the C-3PO level of disguise that 3D Cultures attempted by putting stickers over the original logo, the donor machine for the Tissue Scribe is very obviously a Monoprice Select Mini, the undisputed king of beginner printers. The big change of course comes from the removal of the extruder and hotend, which has been replaced with an apparatus that can heat and depress a standard syringe.

At the very basic level, bioprinting is performed in the exact same way as normal 3D printing; it’s merely a difference in materials. While 3D printing uses molten plastic, bioprinting is done with organic materials like algae or collagen. In the Tissue Scribe, the traditional 3D printer hotend has been replaced with a syringe full of the organic material to be printed which is slowly pushed down by a NEMA 17 stepper motor and 8mm leadscrew.

The hotend heating element and thermistor that once were used to melt plastic are still here, but now handle warming the metal frame used to hold the syringe. In theory these changes would have only required some tweaks to the firmware calibration to get working. Frankly, it makes perfect sense, and is certainly a much easier to pull off than some of the earlier attempts at homebrew biological printers we’ve seen.

We won’t comment on the Tissue Scribe’s price point of $999 USD except to say that in the field of bioprinters, that’s pocket change. Still, it seems inevitable that somebody will build and document their own bolt-on biological extruder now that 3D Cultures has shown how simple it really is, so they may find themselves undercut in the near future.

If all this talk of hot extruded collagen has got you interested, we’ve seen some excellent resources on the emerging field of bioprinting that will probably be right up your alley.