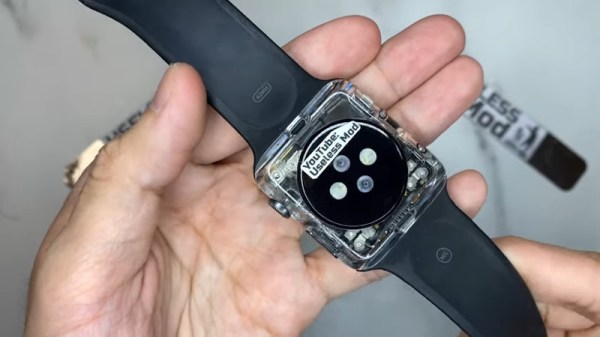 The Apple Watch was the tech company’s attempt to bring wrist computers into the mainstream. It’s naturally available in a variety of fits and finishes, but if you want something properly original, you’ve got to go custom. [Useless Mod] does just that with a clear case for the popular smartwatch.

The mod starts with a patient, careful disassembly of the watch – necessary given the delicate components inside. It’s achieved in the end with only having to drill out 1 screw and an unfortunately snapping of the crown wheel axle. However, [Useless Mod] presses on, and silicone casts the original Apple enclosure. The video goes over all the finer points, from degassing to using strips of acrylic plastic to act as runners. Once done, the silicone mold is used to produce a replica case in transparent epoxy, and the watch is reassembled.

The final result is impressive, with the case optically clear and showing off the watch’s internals. The look is improved by removing some of the original insulation tape to better reveal the PCBs inside. Unfortunately, the design of the watch, which is largely covered by a screen and heartbeat sensor, means it’s not the greatest choice for a clear case mod, but it works nonetheless. We’ve seen similar work before from [Useless Mod] too – like this transparent drone case for the Mavic Mini. Video after the break.

END_OF_DOCUMENT_TOKEN_TO_BE_REPLACED

What happens if the slick user interface and tight iOS integration of your Apple Watch leave you wanting more? A real operating system, from the days when men were men and computers were big grey boxes!

[Nick Lee] solved this unexpected problem with his Watch by getting a working copy of Windows 95 to run on it. On paper it shouldn’t be at all difficult, with a 520 MHz ARM, 512 MB of RAM, and 8GB of storage you might think that it would eclipse the quick 486s and low-end Pentiums we ran ’95 on back in the day with ease. But of course, the ability to run aged Redmond operating systems on a Watch was probably not at the top of the Apple dev team’s feature list, so [Nick] had to jump through quite a few hoops to achieve it.

As you might expect, the ’95 installation isn’t running directly on the Watch. In the absence of an x86 processor his complex dev process involved getting the Bochs x86 emulator to compile for the Watch, and then giving that a ’95 image to boot. The result is comically slow, with a 1-hour boot time and a little motor attached to the Watch to vibrate it and stop it going to sleep. It’s not in any way a useful exercise, after all who’d really want to use ’95 on a Watch? Internet Explorer 3 and The Microsoft Network, how handy! But it’s one of those “because you can” exercises, and we applaud [Nick] for making it happen. If you want to give it a try, his Bochs-forWatchOS code is on Github.

The video below the break shows the process of booting the ’95 Watch, opening the Start Menu, and running one of the card games. One can almost feel the lengthening shadows outside as it goes.

END_OF_DOCUMENT_TOKEN_TO_BE_REPLACED

For many of us, we remember the days of the Apple Classic Macintosh. For [Erich Styger], his days of development in Pascal and Modula-2 are long over, but he still gets warm and tingly thinking back to the classic white box we knew and loved. So he decided to 3D print a Classic Mac to use as his Apple Watch charging station.

He started with an existing model on Thingiverse and modified it to better suit his needs — sharing CAD makes the design process go ever so much faster. It consists of two parts, an outer shell that looks like a Classic Mac, and an inner structure that holds the stock charger for your Apple Watch.

The result is an adorably small Classic Mac to sit on your desk in miniature form. It’s perhaps the most acceptable use of a $1000 Apple Watch we have ever seen.

Seriously though, the Apple Watch is nicely built — just take a look at the tear-down we covered. 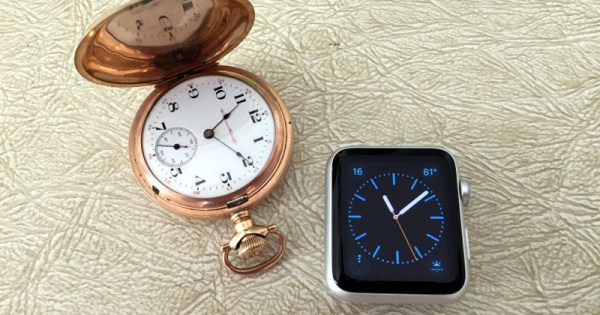 Mechanical watch enthusiasts see the Apple watch as a threat to the traditional gear train. It does not tick, requires frequent re-charging, and it’s certainly not the most attractive of watches. But it can direct you to the local coffee shop, allow you to communicate with friends anywhere in the world, get you onto an airplane after the most awkward of arm gestures, and keep you apprised of the latest NCAA basketball scores. Is the advent of the smart watch the end to the mechanical watch?
END_OF_DOCUMENT_TOKEN_TO_BE_REPLACED

The Apple Watch has been out for nearly a month now, but so far we haven’t seen a good look at the guts of this little metal bauble of electronic jewelry. Lucky for us that a company in China is hard at work poking around inside the Apple Watch and putting up a few incredible SEM images along the way (Google Translatrix).

This isn’t the first Apple Watch teardown that’s hit the intertubes – iFixit tore one apart with spudgers and tiny screwdrivers and found someone skilled in the ways of tiny parts could probably replace the battery in this watch. Shocking for an Apple product, really. iFixit also took a look at the watch with an x-ray, revealing a little bit of the high-level design of the Apple Watch, the Apple S1 computer on a chip, and how all the sensors inside this wearable work.

This teardown uses an incredible amount of very high-tech equipment to peer inside the Apple Watch. Because of this, it’s probably one of the best examples of showing how these tiny sensors actually work. With some very cool images, a 6-DOF IMU is revealed and the Knowles MEMS microphone is shown to be a relatively simple, if very small part.

Now the Apple S1, the tiny 26.15mm x 28.50mm computer on a chip, serves as the brains of the Apple Watch. It’s breathtakingly thin, only 1.16mm, but still handles all the processing in the device.

Even if you won’t be buying this electronic accessory, you’ve got to respect the amazing amount of engineering that went into this tiny metal bauble of semiconductors and sensors. 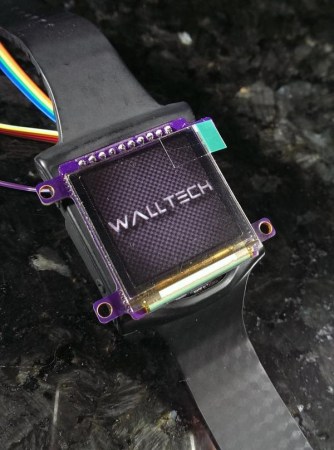 While there is lots of hype about a big company launching a new wearable product, we’re more interested in [Walltech]’s open source OLED Smartwatch. This entry into The Hackaday Prize merges a collection of sensors and an OLED screen into a wearable device that talks to your smartphone over Bluetooth Low Energy.

The device is based on the IMUduino BTLE development board. This tiny Arduino clone packs an inertial measurement unit (IMU), a Nordic nRF8001 Bluetooth radio, and an ATMEGA32u4 microcontroller.

The 1.5″ OLED display comes from [miker] who makes an OLED module based on the SSD1351. A STP200M 3D pedometer provides activity monitoring in a tiny package.

On the hardware side, packaging all these components into something that will fit on your wrist is quite difficult. The prototype hardware is built from mostly off the shelf components, but still manages to be watch sized.

At this point, it looks like the code is the main challenge remaining. There’s a lot of functionality that could be implemented, and [Walltech] even mentions that it’s designed to be very customizable. It even supports Android; the Apple Watch can’t do that.