END_OF_DOCUMENT_TOKEN_TO_BE_REPLACED

The Goodbye 2020 contest asked you to turn out the lights on an objectively crappy year in an interesting way. Four winners have been announced, and we have to tip the hat to [Becky Stern] for both creativity and execution on the 2020 candle seen above. Three wicks burn the candle down, revealing a metalwork dumpster fire along the way. It’s not just a performance piece but also an interesting look into candle making with 3D printed molds and insight on specifics like pour-temperature for best results. [Becky] entered as a group with a few other YouTube channels that included gags like [TechnoChic’s] knitted 2020 mask that is unraveled to count down the to the end. 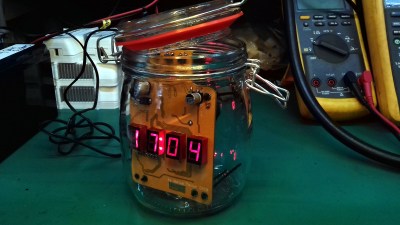 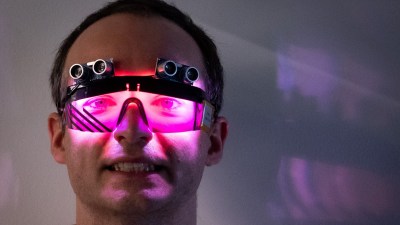 [Marius Taciuc] spun up a clock to count down his year. The custom PCB uses a set of 7-segment displays to show the time (and some custom messages), along with a battery-backed RTC for precision. The aesthetic is a PC overclocker’s dream as the timepiece lives inside of a mason jar filled with baby oil.

You certainly can’t go out to a rave during these pandemic times. [George Cave] brought the party to his face with a set of shades that blast RGB light into your eyeballs. A pair of ultasonic distance sensors shut the party down if anyone breaks social distancing guidelines.

And [Scott Clandinin] picked up an honorable mention with a Christmas-themed countdown. A color LCD takes the place of a from/to card on a gift wrapped package, displaying the number of days using candy cane font.

Congratulations to each of the winners who received a $25 Tindie gift card for showing off their whimsical work.

The Apple Watch was the tech company’s attempt to bring wrist computers into the mainstream. It’s naturally available in a variety of fits and finishes, but if you want something properly original, you’ve got to go custom. [Useless Mod] does just that with a clear case for the popular smartwatch.

The mod starts with a patient, careful disassembly of the watch – necessary given the delicate components inside. It’s achieved in the end with only having to drill out 1 screw and an unfortunately snapping of the crown wheel axle. However, [Useless Mod] presses on, and silicone casts the original Apple enclosure. The video goes over all the finer points, from degassing to using strips of acrylic plastic to act as runners. Once done, the silicone mold is used to produce a replica case in transparent epoxy, and the watch is reassembled.

The final result is impressive, with the case optically clear and showing off the watch’s internals. The look is improved by removing some of the original insulation tape to better reveal the PCBs inside. Unfortunately, the design of the watch, which is largely covered by a screen and heartbeat sensor, means it’s not the greatest choice for a clear case mod, but it works nonetheless. We’ve seen similar work before from [Useless Mod] too – like this transparent drone case for the Mavic Mini. Video after the break.

END_OF_DOCUMENT_TOKEN_TO_BE_REPLACED

As much as we love Star Trek, we have to admit there are some continuity problems. For example, in Spock’s Brain, the alien-of-the-week’s ion drive gave Scotty engineering envy. However, in The Menagerie, the computer identifies a Starfleet shuttlecraft as having ion propulsion. Either way, ion propulsion is real and NASA has toyed with it for ages and many satellites use it for maintaining orbit. Now researchers from MIT and the Monterrey Institute of Technology and Higher Studies 3D printed tiny ion engines.

The engine is about the size of a dime and, like all ion engines, produces tiny amounts of thrust. In fact, the researchers liken it to half the weight of one sesame seed from a hamburger bun. However, in space, these tiny thrusts add up and over time can produce significant acceleration.

END_OF_DOCUMENT_TOKEN_TO_BE_REPLACED

The Consumer Electronics Show was not typically a place for concept cars, and Sony aren’t known as a major automaker. However, times change, and the electric transport revolution has changed much. At the famous trade show, Sony shocked many by revealing its Vision-S concept — a running, driving, prototype electric car.

Far from a simple mockup to show off in-car entertainment or new fancy cameras, Sony’s entry into the automotive world is surprisingly complete. Recently, the Japanese tech giant has been spotted testing the vehicle on the road in Austria, raising questions about the future of the project. Let’s dive in to what Sony has shown off, and what it means for the potential of the Vision-S.

END_OF_DOCUMENT_TOKEN_TO_BE_REPLACED

Even those critical of Apple as a company have to admit that they were really onto something with the iPod. The click wheel was a brilliant input device, and the simplicity of the gadget’s user interface made it easy to get to the music you wanted with a minimum of hoop jumping. Unfortunately it was a harbinger of proprietary software and DRM, but eventually there were a few open source libraries that let you put songs on the thing without selling your soul to Cupertino.

Of course, modern users expect a bit more than what the old hardware can deliver. Which is why [Guy Dupont] swapped the internals of his iPod Classic with a Raspberry Pi Zero W. This new Linux-powered digital audio player is not only capable of playing essentially any audio format you throw at it, but can also tap into streaming services such as Spotify. But such greatness doesn’t come easy; to pull this off, he had to replace nearly every component inside the player with the notable exception of the click wheel itself. Good thing the Classics were pretty chunky to begin with.

In addition to the Pi Zero running the show, he also had to fit a 1000 mAh battery, its associated charging and boost modules, a vibration motor for force feedback, and a 2″ LCD from Adafruit. The display ended up being almost the perfect size to replace the iPod’s original screen, and since it uses composite video, only took two wires to drive from the Pi. To interface with the original click wheel, [Guy] credits the information he pulled from a decade-old Hackaday post.

Of course with a project like this, the hardware is only half the story. It’s one thing to cram all the necessary components inside the original iPod enclosure, but by creating such an accurate clone of its iconic UI in Python, [Guy] really took things to the next level. Especially since he was able to so seamlessly integrate support for Spotify, a feature the Apple devs could scarcely have imagined back at the turn of the millennium. We’re very interested in seeing the source code when he pushes it to the currently empty GitHub repository, and wouldn’t be surprised if it set off a resurgence of DIY iPod clones.

We’ve seen modern hardware grafted onto the original iPod mainboard, and over the years a few hackers have tried to spin up their own Pi-based portable music players. But this project that so skillfully combines both concepts really raises the bar.