Phlebotomy is a fun word, and the fine art of finding veins. While the skill of putting needles in arms is honed by nurses and physicians over the course of decades, there are, of course, technological solutions to finding veins. One of the more impressive medical devices that does this uses near-infrared imaging — basically looking under the skin with almost visible light. These devices cost a fortune.

One project in the Hackaday Prize is looking to change that. It’s a near-infrared vein finder. Instead of the thousands of dollars professional unit costs, this one can be built for under one hundred bucks.

As far as this build goes, veins are illuminated via IR light at about 950nm. The backscatter of this light is captured via a Raspberry Pi NoIR camera, with regular old photography film blocking visible light. From there, it’s just a simple matter of image processing and hitting enhance several times until veins appear on a display.

The team behind this project has already developed a mobile version of the device, complete with 3D printed parts. It’s a handy device and a great entry for the Hackaday Prize. 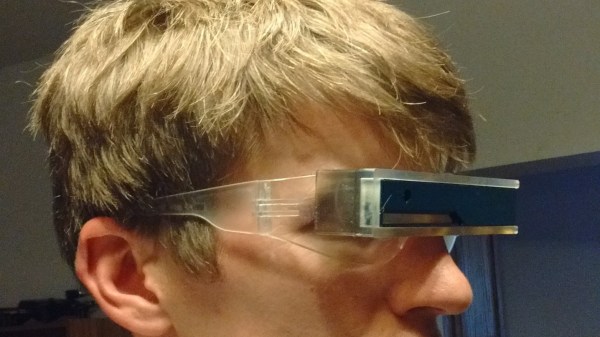 Echolocation projects typically rely on inexpensive distance sensors and the human brain to do most of the processing. The team creating SNAP: Augmented Echolocation are using much stronger computational power to translate robotic vision into a 3D soundscape.

The SNAP team starts with an Intel RealSense R200. The first part of the processing happens here because it outputs a depth map which takes the heavy lifting out of robotic vision. From here, an AAEON Up board, packaged with the RealSense, takes the depth map and associates sound with the objects in the field of view.

Binaural sound generation is a feat in itself and works on the principle that our brains process incoming sound from both ears to understand where a sound originates. Our eyes do the same thing. We are bilateral creatures so using two ears or two eyes to understand our environment is already part of the human operating system.

In the video after the break, we see a demonstration where the wearer doesn’t need to move his head to realize what is happening in front of him. Instead of a single distance reading, where the wearer must systematically scan the area, the wearer simply has to be pointed the right way.

Another Assistive Technology entry used the traditional ultrasonic distance sensor instead of robotic vision. There is even a version out there for augmented humans with magnet implants covered in Cyberpunk Yourself called Bottlenose.

END_OF_DOCUMENT_TOKEN_TO_BE_REPLACED

This year, the Hackaday Prize is going to find the most innovative and interesting assistive technologies. Whether that’s refreshable Braille displays or reliable utensils for the disabled, the finalists for the Assistive Technologies portion of the Prize will be creating some of the most interesting tech out there.

For his entry into the Assistive Technology part of the Prize, [Pawit] is building binaural glasses for the blind. It’s difficult to navigate unknown environments without a sense of sight, and these SonicScape glasses turn cheap distance sensors into head-mounted sonar.

The glasses are built around a pair of ultrasonic distance sensors (the HC-SR-04, if you’re curious), mounted in a convenient 3D-printed enclosure that looks sufficiently like a pair of glasses to not draw too many glares. (Although maybe we’d print them in black to lower the contrast.) Of note in this project is the Bluetooth connectivity to eliminate wires and independent left and right audio channels. That last bit — being able to hear in left and right — is something we haven’t seen before in devices like this and aims to greatly increase the usability of such a device. 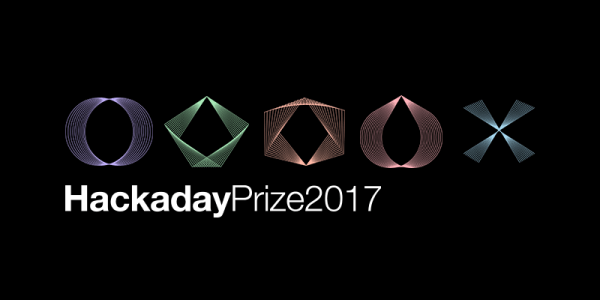 This morning marks a new challenge in the Hackaday Prize: we want to see what you can do with Assistive Technology. Twenty entries will win $1000 each, becoming part of the final round for a chance at the top prizes ranging from $5,000 to $50,000. 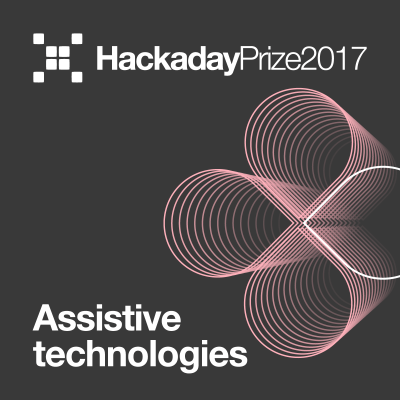 Assistive Technology means things that help people by improving their quality of life. This can take so many forms but broadly speaking this could make aging easier, turn disabilities into abilities, or enhance the access and delivery of health care.

We’ve seen great things in this area from the Hackaday community. The Grand Prize for the 2015 Hackaday Prize went to an assistive technology that linked motorized wheelchairs to gaze-controlled computers, called Eyedrivomatic. And at the 2016 Hackaday SuperConference we learned how common tools and crowd sourced skills can lead to a new take on physical rehabilitation with a robot-assisted elbow.

The Hackaday Prize challenges us all to Build Something that Matters. It’s hard to argue that there is a better place to take on this challenge than with Assistive Technologies. Enter your project today! 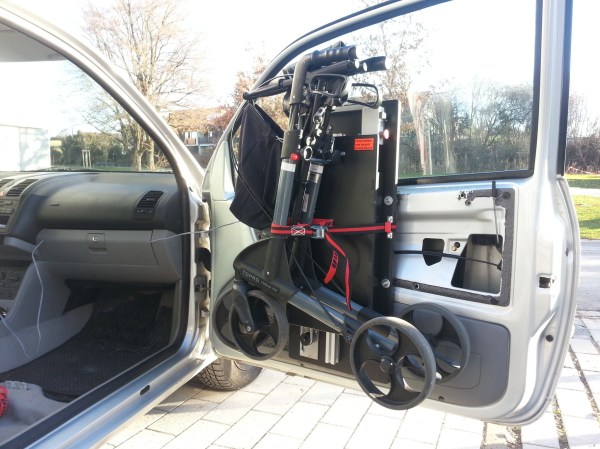 [typo]’s mother gets around with a walker. It’s a great assistive device until she has to lift the heavy thing up into her car. Noting that this was a little cruel he did as any hacker would and found a way to automate the process.

The build is pretty cool. She had to give up her passenger seat, but it’s a small price to pay for independence. He removed the door paneling on the passenger side. Then he welded on a few mounting points. Next he had to build the device.

The well-built device has a deceptively simple appearance. The frame is made from CNC milled panels and the ever popular aluminum extrusion. It uses a 12V right angle drive and some belting to lift the chair. There’s no abundance of fancy electronics here. A toggle switch changes the direction of the motor. There are some safety endstops and an e-stop.

Now all she has to do is strap the walker to the door. She picks the direction she wants the lift to go and presses a button. After which she walks the short distance to the driver’s seat, and cruises away.

The theme of the last Hackaday Prize challenge was Assistive Technologies, and there is perhaps no assistive technology as desperately needed as a device to help people who can’t use common input devices. Using a keyboard, mouse, or touchscreen can be hard, but this Hackaday Prize project turns all these problems into a simple Bluetooth-enabled switch.

The BOSI – the Bluetooth Open Source Switch Interface – is, at its heart, just a big Bluetooth button inside a 3D-printed enclosure designed in Solidworks. These enclosures house a button connected to an Adafruit Bluefruit EZ-Key. Add a battery and a charging circuit, and you have a button that can be pressed by anyone, that connects to any device, and can do anything.

The real trick to a system like this is the software stack, and for this, BOSI can be used with iOS and OS X using the Switch Control interface. Android works, too, and the entire device is exceptionally usable for anyone that can’t use a normal input device. A great entry for the Hackaday Prize.

For the last seven months, Hackaday has been hosting the greatest hardware competition on Earth. The Hackaday Prize is a challenge to Build Something That Matters, asking hardware creators around the world to focus their skills to change the world.

The results have been spectacular. In five rounds of design challenges, we’ve seen more than 1000 entries and so far eighty of them have won $1000 and a chance to win the Grand Prize: $150,000 and a residency at the Supplyframe DesignLab in Pasadena.

Who Will win the 2016 Hackaday Prize?

The finalists from each round are now being sent to our fantastic panel of judges. One of them will be awarded the Hackaday Prize. In addition to the prestige, they will win $150,000 and a residency at the Supplyframe DesignLab in Pasadena. Four more of the finalists will receive the other cash prizes of $25k, $10k, $10k, and $5.