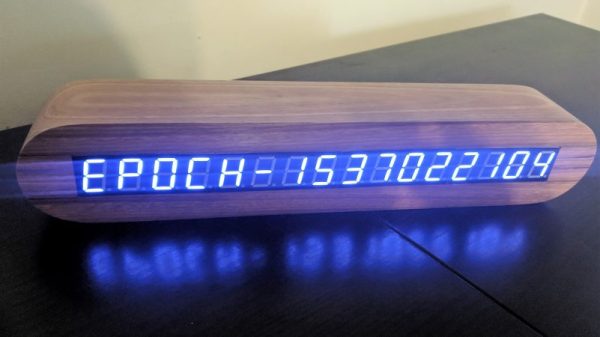 Admit it: when you first heard of the concept of the Unix Epoch, you sat down with a calculator to see when exactly 2³¹-1 seconds would be from midnight UTC on January 1, 1970. Personally, I did that math right around the time my company hired contractors to put “Y2K Suspect” stickers on every piece of equipment that looked like it might have a computer in it, so the fact that the big day would come sometime in 2038 was both comforting and terrifying.

[Forklift] is similarly entranced by the idea of the Unix Epoch and built a clock to display it, at least for the next 20 years or so. Accommodating the eventual maximum value of 2,147,483,647, plus the more practical ISO-8601 format, required a few more digits than the usual clock – sixteen to be exact. The blue seven-segment displays make an impression in the sleek wooden case, about which there is sadly no detail in the build log. But the internals are well documented, and include a GPS module and an RTC. The clock parses the NMEA time string from the satellites and syncs the RTC. There’s a brief video below of the clock in action.

We really like the look of [Forklift]’s clock, and watching the seconds count up to the eventual overflow seems like a fun way to spend the next two decades. It’s not the first Epoch clock we’ve featured, of course, but it’s pretty slick.

END_OF_DOCUMENT_TOKEN_TO_BE_REPLACED 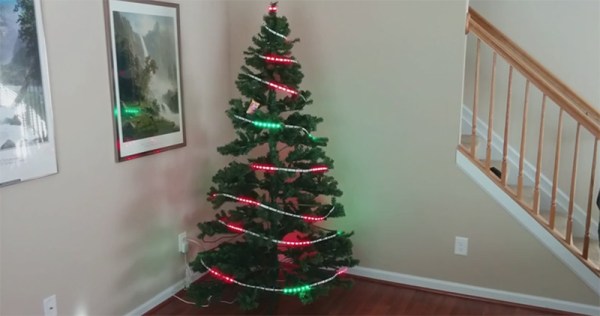 It’s that time of the year again, and the halls are being decked with trees, the trees covered in lights, and everyone working in retail is slowly going insane from Christmas songs piped over the PA. [Dan] has a tree and a bunch of programmable LEDs, but merely pumping jollity down that strip of LEDs wouldn’t be enough. The Nerd Quotient must be raised even higher with a tree that displays a Unix timestamp.

This build was inspired by an earlier, non-tree-based build that displays Unix time on a 32 LED array. That build used an ATMega328p for toggling LEDs on and off. This time around, [Dan] is using a dedicated LED controller – the AllPixel – that just wrapped up a very successful Kickstarter campaign. The AllPixel is, in turn, controlled by a Raspberry Pi running the BiblioPixel library,

The tree displays the current time stamp in binary across 32 spaces, with green representing a ‘one’ and a red representing ‘zero’. The top of the tree is the least significant bit, but in case [Dan] gets tired of the bottom of the tree staying completely still for the rest of this holiday season, he can switch the order making the base of the tree the LSB.

END_OF_DOCUMENT_TOKEN_TO_BE_REPLACED What time is it? For that matter, what is the date? This clock can tell you both of those things, if only you could read it. The inspiration for this Binary Epoch kit came after a friend of [Maniaclal Labs] built an eight-bit binary clock. That’s a pretty common project that gets riffed on for things like mains-timed logic-driven clocks. They figured why not make it bigger? But even then you can make some sense out of the display after studying it for just a bit, you won’t be much closer to answering those two questions.

Check out the video below that shows how to set the clock, which uses a menu system for human-friendly input. But since it’s Arduino compatible you can also connect an FTDI cable and program it from a computer. Oh, and since this is Open Source Hardware (note the icon in the lower right) you can get all the info to build (or breadboard) your own from their Github repo.

Here’s another complicated clock that uses Nixie tubes to display time and date info which is actually of use.

END_OF_DOCUMENT_TOKEN_TO_BE_REPLACED Want to control things with your mind? The Emotiv EPOCH EEG is one of the best pieces of hardware you can get that is ready to be hacked into your project. Too bad the entry-level SDK will set you back $500. Or you can take advantage of [Cody Brocious’] work by using his Emotiv Python Library. He sniffed around the data coming in over the USB connection and discovered that it’s encrypted. With a bit of trickery he extracted the key and built the 128-aes decryption routine into his package. So far this just pulls raw data from the unit so it’s up to you to figure out how to properly filter the signals and differentiate which sensor corresponds to each data stream. But it’s a start, and hopefully it’ll lead to more mind controlled doo-dads.