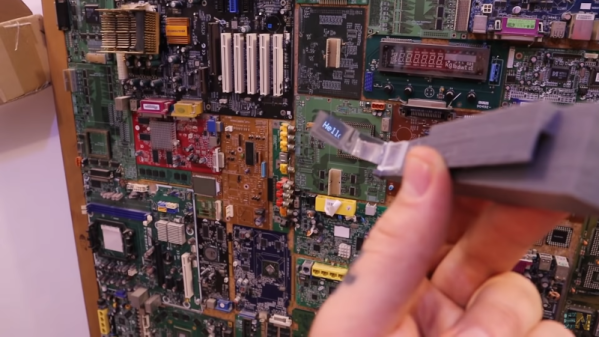 Sometimes it is hard to probe a circuit and then look over at the meter. [Electronoobs] decided to fix that problem by making a Google Glass-like multimeter using an OLED screen and Bluetooth module.

The custom PCB doesn’t have many surprises. A small board has a controller, a battery charger, a display, and a Bluetooth module. One thing he did forget is a switch, though, so the board is always on unless you arrange an external switch.

END_OF_DOCUMENT_TOKEN_TO_BE_REPLACED

If you somehow manage to mentally separate yourself from the human tragedy of the COVID-19 pandemic, it really has provided a fascinating glimpse into how our planet operates, and how much impact seven billion people have on it. Latest among these revelations is that the shutdowns had a salubrious effect in at least one unexpected area: solar power. Researchers found that after the Indian government instituted mandatory lockdowns in March, output from solar power installations in Delhi increased by more than eight percent. The cause: the much-diminished smog, which let more sunlight reach solar panels. We’ve seen similar shutdown-related Earth-impact stories, from decreased anthropogenic seismicity to actually being able to see Los Angeles, and find them all delightfully revealing.

Remember Google Glass? It’s hard to forget, what with all the hype leading up to launch and the bitter disappointment of realizing that actually wearing the device wouldn’t go over well in, say, a locker room. That said, the idea of smart glasses had promise, and several startups tried to make a go of combining functionality with less out-there styling that wouldn’t instantly be seen as probable cause for being a creep. One such outfit was North, who made the more-or-less regular looking (if a bit hipsterish) Focals smart glasses. But alas, North was bought out by Google back in June, and as with so many things Google acquires, Focals smart glasses are being turned off. Anyone who bought the $600 specs will reportedly get their money back, but the features of the smart glasses will no longer function. Except, you know, you’ll still be able to look through them.

It looks like someone has finally come up with a pretty good use case for the adorably terrifying robot mini-dogs from Boston Dynamics. Ford Motors has put two of the yellow robots to work in their sprawling Van Dyke Transmission Plant in Michigan. Dubbed Fluffy and Spot (aww), the dogs wander around the plant with a suite of cameras and sensors, digitally mapping the space to prepare for possible future modifications and expansions. The robots can cover a lot of ground during the two hours that their batteries last, and are even said to be able to hitch a ride on the backs of other robots when they’re tuckered out. Scanning projects like these can keep highly trained — and expensive — engineers busy for weeks, so the investment in robots makes sense. And we’re sure there’s totally no way that Ford is using the disarmingly cute robo-pets to keep track of its employees.

We all know that the Linux kernel has some interesting cruft in it, but did you know that it can actually alert you to the fact that your printer is aflame? We didn’t either until  Editor-in-Chief Mike Szczys shared this reddit post that details the kernel function lp_check_status and how it assumes the worst if it detects the printer is online but also in “check mode.” The Wikipedia entry on the “lp0 on fire” error message has some interesting history that details how it’s not as implausible as it might seem for a printer, especially one in the early 1970s, to burst into flames under the right conditions. A toner fuser bar running amok on a modern laser printer is one thing, but imagine a printer with a fusing oven running out of control.

And finally, because 2020 is apparently the gift that can’t stop giving, at least in the weirdness department, the US Department of Defense let it slip that the office charged with investigating unidentified aerial phenomena is not quite as disbanded as they once said it was. Reported to have been defunded in 2017, the Advanced Aerospace Threat Identification Program actually appears to live on, as the Unidentified Aerial Phenomena Task Force, operating out of the Office of Naval Intelligence. Their purpose is ostensibly to study things like the Navy videos of high-speed craft out-maneuvering fighter jets, but there are whispers from former members of the task force that “objects of undetermined origin have crashed on earth with materials retrieved for study.” All this could just be a strategic misdirection, of course, but given everything else that has happened this year, we’re prepared to believe just about anything. 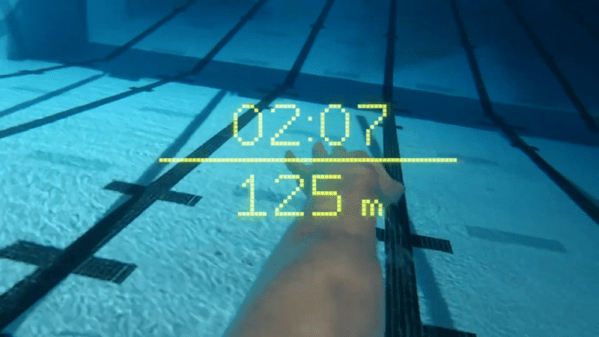 Athletes have a long history of using whatever they can find to enhance their performance or improve their training. While fitness tracker watches are nothing new, swimmers have used them to track their split times, distance, and other parameters. The problem with fitness trackers though is that you have to look at a watch. FORM has swim goggles that promise to address this, their smart goggles present the swimmer with a heads-up display of metrics. You can see a slick video about them below.

The screen is only on one eye, although you can switch it from left to right. The device has an inertial navigation system and is — of course — waterproof. It supposedly can withstand depths up to 32 feet and lasts 16 hours on a charge. It can use Bluetooth to send your data to your phone in addition to the display.

END_OF_DOCUMENT_TOKEN_TO_BE_REPLACED

[Ricardo Ferro] didn’t want to buy a Google Glass, so he made his own.

The Raspberry Pi Zero Prism consists of a 3D-printed headset the side-pieces of which hold a variety of electronic components, including a Pi Zero running Raspbian Jessie, a Pi Noir IR camera, a WiFi/Bluetooth module and a whole mess of SMD tactile push buttons. Video output is provided by a Kopin 922K display module. This module is usually used in smart goggles and uses a prism to reflect information into the wearer’s field of view.

One application [Ricardo] envisions for this Open Source Google Glass is using it in conjunction with facial recognition software and the YouTube-favorite IR camera trick of seeing through clothing. No, he’s not using it for that idea, and you should get your mind out of the gutter. [Ricardo] wants to identify masked criminals. Setting aside the technological challenges of making that technology work, we think that walking around with x-ray specs is likely to get those specs broken off your face by someone who wears clothes for modesty purposes. Still, it’s a fascinating project and we love the way the prism and video assembly comes together.

[Alain Mauer] wanted to build something like a Google Glass setup using a small OLED screen. A 0.96 inch display was too large, but a 0.66 inch one worked well. Combining an Arduino, a Bluetooth module, and battery, and some optics, he built glasses that will show the readout from a multimeter.

You’d think it was simple to pull this off, but it isn’t for a few reasons as [Alain] discovered. The device cost about 70 Euro and you can see a video of the result, below.

END_OF_DOCUMENT_TOKEN_TO_BE_REPLACED

Google Glass kind of came and went, leaving one significant addition to the English language. Even Google itself used the term “glasshole” for people who used the product in a creepy way. We can’t decide if wearing an obviously homemade set of glasses like the ones made by [Jordan Fung] are more creepy, give you more hacker cred, or just make you look like a Borg. Maybe some combination of all of those. While the cost and complexity of developing for Google Glass was certainly a barrier for hacking on that hardware, this project is just begging for you to build your own and run with the concept.

[Jordan’s] build, called Pedosa Glass, really is pretty respectable for a self-built set up. The Arduino Nano is a bit bulky, and the three push buttons take up some room, but it doesn’t kill the ability to mount them in a glasses form-factor. An FLCoS display lets you see the output of the software which [Jordan] is still developing. Right now features include a timer and a flashlight that uses the head-mounted white LED. Not much, we admit, but enough to prove out the hardware and the whole point would be to add software you wanted.

Admittedly, it isn’t exactly like Google Glass. Although both use FLCoS displays, Pedosa Glass uses a display meant for a camera viewfinder, so you don’t really see through it. Still, there might be some practical use for a little display mounted in your field of vision. The system will improve with a better CPU that is easier to connect to the network with sensors like an accelerometer — there’s plenty of room to iterate on this project. Then again, you do have an entire second ear piece to work with if you wanted to expand the system.

Check out the video demo after the break.

END_OF_DOCUMENT_TOKEN_TO_BE_REPLACED