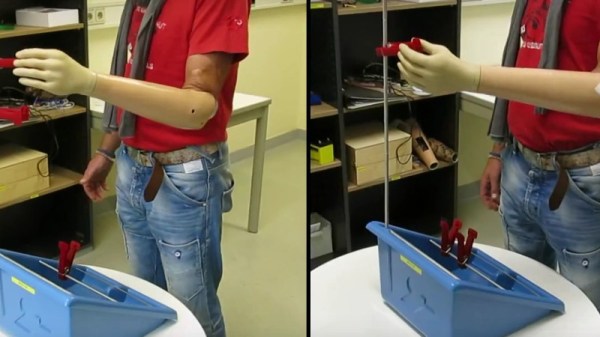 Prosthetic arms can range from inarticulate pirate-style hooks to motorized five-digit hands. Control of any of them is difficult and carries a steep learning curve, rarely does their operation measure up to a human arm. Enhancements such as freely rotating wrist might be convenient, but progress in the field has a long way to go. Prosthetics with machine learning hold the promise of a huge step to making them easier to use, and work from Imperial College London and the University of Göttingen has made great progress.

The video below explains itself with a time-trial where a man must move clips from a horizontal bar to a nearby vertical bar. The task requires a pincer grasp and release on the handles, and rotation from the wrist. The old hardware does not perform the two operations simultaneously which seems clunky in comparison to the fluid motion of the learning model. User input to the arm is through electromyography (EMG), so it does not require brain surgery or even skin penetration.

We look forward to seeing this type of control emerging integrated with homemade prosthetics, but we do not expect them to be easy.

END_OF_DOCUMENT_TOKEN_TO_BE_REPLACED 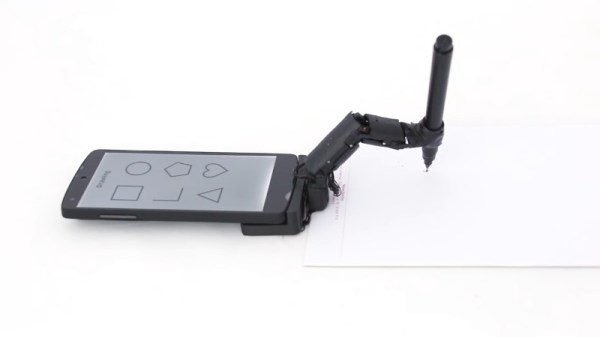 The modern smartphone has a variety of ways to interact with its user – the screen, the speakers, and of course, the vibration motor. But what if your phone could interact physically? It might be unnerving, but it could also be useful – and MobiLimb explores exactly this possibility.

Yes, that’s right – it’s a finger for your mobile phone. MobiLimb has five degrees of freedom, and is built using servomotors which allow both accurate movement as well as positional feedback into the device. Additionally, a touch-sensitive potentiometer is fitted, allowing the robofinger to respond to touch inputs.

The brains behind the show are provided by an Arduino Leonardo Pro Micro, and as is usual on such projects, the mechanical assembly is 3D printed – an excellent choice for producing small, complex parts. Just imagine the difficulty of trying to produce robotic fingers with classic machine tools!

The project video shows many different possibilities for using the MobiLimb – from use as a basic notification device, to allowing the smartphone to crawl along a table. We frankly can’t wait until there’s a fully-functional scorpion chassis to drop an iPhone into – the sky really is the limit here.

Interested in other unique ways to interact with your smartphone? Check out these nifty 3D printed physical buttons. 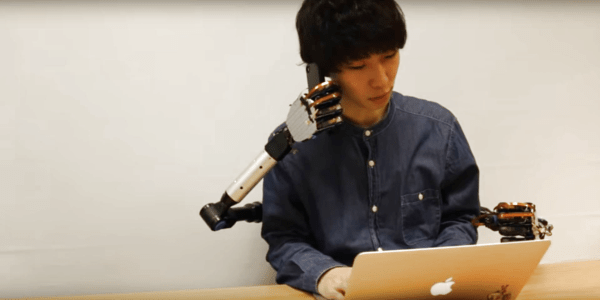 The days of the third hand’s dominance of workshops the world over is soon coming to an end. For those moments when only a third hand is not enough, a fourth is there to save the day.

Dubbed MetaLimbs and developed by a team from the [Inami Hiyama Laboratory] at the University of Tokyo and the [Graduate School of Media Design] at Keio University, the device is designed to be worn while sitting — strapped to your back like a knapsack — but use while standing stationary is possible, if perhaps a little un-intuitive. Basic motion is controlled by the position of the leg — specifically, sensors attached to the foot and knee — and flexing one’s toes actuates the robotic hand’s fingers. There’s even some haptic feedback built-in to assist anyone who isn’t used to using their legs as arms.

The team touts the option of customizeable hands, though a soldering iron attachment may not be as precise as needed at this stage. Still, it would be nice to be able to chug your coffee without interrupting your work.