Now that most of what we do revolves around our phones and/or the internet, it’s nearly impossible to take a short break from work to check the ol’ calendar without being lured by the sirens on the shore of social media. Well, [samvanhook] was tired of being drawn in when all he really needs is a vague idea of what’s coming up for him in the next 12 hours. Enter the CalClock.

Thanks to color-coded segments, [sam] can tell at a glance if he has something coming up soon in Google Calendar, or if he can dive back into work. When nothing is scheduled, the segments are simply unlit.

We love the mid-century minimal look and craftsmanship of CalClock. This beauty runs on a Raspi Zero W, which fetches the 411 through the gooCal API and lights up the appropriate NeoPixels arrayed behind standard clock movement-driven hands.  [sam] could have diffused the NeoPixels with a single sheet of acrylic, but he went the extra mile to route and sand little acrylic ice cubes for all 24 segments.

Want more control of your day? [sam] took the time to upload both the clock face model and the code so you can. If you need help just getting started each day, check out this calendar-polling Raspi alarm clock.

The practice of developing wearable electronics offers a lot of opportunity for new connector designs and techniques for embedding electronics. Questions like these will eventually come up: How will this PCB attach to that conductive fabric circuit reliably? What’s the best way to transition from wire to this woven conductive trim? What’s the best way to integrate this light element into this garment while still maintaining flexibility?

Mika Satomi and Hannah-Perner Wilson of Kobakant are innovators in this arena and inspire many with their prolific documentation while they ask themselves questions similar to these. Their work is always geared towards accessibility and the ability to recreate what they have designed. Their most recent documented connector is one they call the Bumblebee Breakout. It connects an SMD addressable RGB LED, such as Adafruit’s Neopixel, to a piece of side glow fiber optic 1.5mm in diameter. On a short piece of tubing, the four pads of the SMD LED are broken out into four copper rings giving it the look of a striped bumblebee. To keep from shorts occurring while wrapping the copper tape contacts around the tube, they use Kapton tape to isolate each layer as they go. 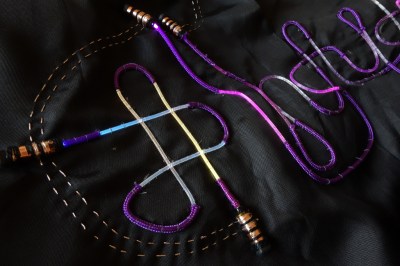 This connector was originally created to be used in a commission they did out of Koba, their e-textile tailor shop located in Berlin. Fiber optics were applied to jackets for a performance called “All Your Base Are Belong To Us” produced by the Puppetry Department of the Hochschule für Schauspielkunst Ernst Busch.

Peruse more e-textiles techniques and learn how to build a connector transitioning from an embroidered thread bus to a wire and how to knit solderable circuit boards. And make sure to click around Kobakant’s website, it’s full of e-textile DIY tutorials!

Neopixels, or WS2812Bs, are addressable RGB LEDs , which can be controlled individually by a microcontroller, in this case, an Arduino. The fabric was quilted with a spiral of numbers (3.1415926535…) and the actual reading of the time is not how you are used to. To read the clock you have to recall the visible color spectrum or the rainbow colors, from red to violet. The rainbow starts at the beginning of the symbol Pi in the center, so the hours will be either red, yellow, or orange, depending on how many digits are needed to tell the time. For example, when it is 5:09, the 5 is red, and the 9 is yellow. When it’s 5:10, the 5 is orange, the first minute (1) is teal, and the second (0) is violet. The pi symbol flashes every other second.

We are not sure if the digits are lighted up according to their first appearance in the Pi sequence or are just random as the video only shows the trippy LEDs, but the effect is pretty nice:

END_OF_DOCUMENT_TOKEN_TO_BE_REPLACED 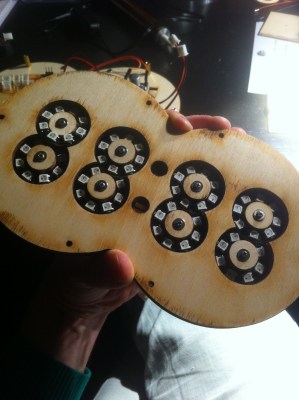 If you are looking for a Star Wars light sabre, sometimes your choices can be a little disappointing. “Replica” sabres from toy and novelty vendors may superficially look the part, but with their tinny speakers and lacklustre show of LEDs they often have less of the Force about them and more of the Farce.

[Jeremy Lee] offers a solution; he’s built what he claims to be the brightest light sabre in the world. That’s a bold assertion, and one which we think might even throw down a gauntlet to other sabre builders and spark an arms race among Jedi wannabes.

The super-bright sabre uses a 144 LED double-sided strip of Neopixels in a polycarbonate tube, with a DC to DC converter powered by a 1000mAH LiPo battery. Sound effects come from a SparkFun Pro Micro powering a 2W speaker through a small audio amplifier. The handle meanwhile is constructed from PVC pipe fittings.

His first attempt at the sabre had the LEDs at full power, and promptly melted his tube. Thus the final version runs at 40% of its maximum rating, with a “burst” mode for those moments at which combat demands it.

His write-up is a series of posts, with plenty of video at all points. It might seem odd to show you the shortest of them here at only a few seconds long, but since the unique selling point is its brightness we think the best way to show that is at night.