[Ray’s] breadboard power supply lets you drain the last traces of power from ‘dead’ AA batteries. Electronics that are powered off of disposable alkaline batteries have a cutoff voltage that usually leaves a fair amount of potential within. Since many municipal recycling programs don’t take the disposables (you’re just supposed to throw them in the trash!) we love the idea of squeezing them for prototyping use.

His design uses just one IC, the MCP1640, along with a handful of passive components. The chip is a boost converter with a startup voltage of just 0.65V, which means the batteries themselves – normally starting life above 1.5V – can be used until they drop to about 0.3V each.

Above you can see the kit he is selling. But it’s an open source project and the circuit is so simple we’re sure you can build your own. Add that boost converter chip to your next parts order for around $0.40.

[Ray] made a nice demo video for the device which you can see embedded after the break.

END_OF_DOCUMENT_TOKEN_TO_BE_REPLACED If you’ve already dipped your toes into high-voltage power supply pool you may be thirsty for a bit more knowledge. Here’s a neat illustration of how to build a voltage multiplier that can output a positive or negative supply. It is based on a design known as the Cockroft-Walton Multiplier. It’s the add-on housed in the plastic box seen in the image above. It uses diodes and capacitors in an orientation very common for generating high voltages. In fact, the same thing can be found in that high-voltage bulletin board. The place this differs is when it comes to connecting the multiplier to the PSU.

If you look closely you can see one red and one black banana plug jack poking out the end of the plastic container. There is also a pair of these on the other end. The multiplier has been designed so that reconfiguring the inputs and outputs changes how it works. Each jack has been labeled with one possible input and one output. Choose the desired output (DC+ or DC-) and then follow the labels for the rest of the connections.

What can you do with this setup? Check out the clip after the break that shows it powering a lifter.

END_OF_DOCUMENT_TOKEN_TO_BE_REPLACED 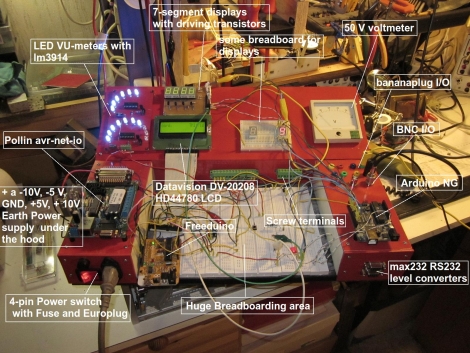 [Claudio] was working on a homebrew oscilloscope project when he started thinking about how unsuitable a standard breadboard is for a large-scale project. Rather than adding components on top of components until they became what he lovingly calls a “fragile, unforgiving crapstack”, he decided to build himself the Ultimate Breadboard.

He packed so much into his design, that it’s honestly hard to know where to begin describing it. Aside from an appropriately large breadboarding surface embedded in the center of the console, he added a power supply to the left hand side, which sits just below an Avr-Net-IO board. The right side of the console features an Arduino NG, and a pair of level converters. He also added some LED-based VU meters, a couple of 7-segment displays, an LCD display, an analog voltmeter, along with plenty of I/O connectors.

The Ultimate Breadboard might look a bit daunting at first, but it seems like an awesome setup on which to do any sort of prototyping. Be sure to check out the video below for more details and to see [Claudio] give a tour of the device.

END_OF_DOCUMENT_TOKEN_TO_BE_REPLACED [Dave] has an ASUS tablet PC with a little problem. The device is charged via the docking connector’s USB cable when plugged into a special wall transformer. The problem is that the wall unit tends to overheat, and is shut down by a thermister inside to avoid permanent damage. The word on the Internet is to drop it in a zipper bag and chill it in the freezer for a bit. Although this works, it’s not the permanent solution that he was looking for. Instead, he hit the parts bin and built his own power supply replacement without buying anything.

The device is simply looking for 12V on the power pin (pin 1) of the USB cable. [Dave] dug through his mountain of unused AC adapters and found one that fit the voltage and current specs of the stock unit. He also grabbed a dusty old motherboard and plucked the USB ports off of the back. A bit of protoboard makes for a good base to connect the AC adapter wires to the ports, which was then covered with one big shrink tube. The result is seen above, and demonstrated in the clip after the break.

END_OF_DOCUMENT_TOKEN_TO_BE_REPLACED Have you documented your own fake electronic hardware finds? We’d love to hear about them. END_OF_DOCUMENT_TOKEN_TO_BE_REPLACED Make your next project solar-powered with this charging circuit. It’s completely through-hole, and there are no microcontrollers that need to be flashed. If you can source parts and are handy with a soldering iron building this will be a breeze.

Both the maximum system voltage and the low voltage drop out are configurable. After assembly, you just need to attach a regulated power supply to the load terminals. Tune the power supply to the max voltage and turn a potentiometer until an LED comes on, then repeat the process for the drop out voltage. Board artwork for the two-sided PCB and a schematic are available from the page linked at the top. If you’re not into etching your own circuit boards you can buy one for around $10.