[Dan]’s project from last year slipped past us until now, but his Ghost Frame is a great example of tying some modern hackable hardware together with online resources into a clean result, and we like the clear idea behind it. The Ghost Frame is so named because its purpose is literally to show pictures of people (and cats) that do not exist in the physical world.

To make it all work, [Dan] used an Adafruit PyPortal as the guts of the device. It pulls images from ThisPersonDoesNotExist.com (which displays computer-assembled images of faces that do not represent actual living people) and displays them as though they were pictures in a digital photo frame. Formatting the image to show up nicely on the PyPortal’s 320 x 240 display took a little extra work; [Dan] solved that problem with a small PHP script to convert the image to a bitmap and scale it correctly in the process. The PyPortal makes fetching resources from the web simple, so this kind of fiddling didn’t present much of an obstacle to [Dan]’s artistic vision.

What about the cats? Well, it turns out that ThisCatDoesNotExist.com is also out there, and Ghost Frame can happily display computer-generated images of nonexistent cats as easily as it shows imaginary people. However, it does seem that the state of nonexistent cat generation is lagging somewhat behind that for people. The site usually gets it right, but results are occasionally (amusingly) bizarre as you can see here.

The PyPortal is perfect for this kind of project, and it can do more than just display static content. It has some GUI functionality baked in, as we saw showcased recently in this touchscreen Blackjack game.

It’s that time of year again, when fall is quickly ushered out to make room for all things holiday-related. For many of us, this means going on trips to visit relatives, which, depending on the relatives, can mean soul-crushing boredom. [Andy] has fun relatives who frequent the casino tables, and they inspired him to brush up on his blackjack game.

Some people would just find a virtual blackjack table or bust out an actual deck of cards to practice, but this is Hackaday. [Andy] busted out his PyPortal and tried his hand at making a blackjack game. The PyPortal is an Adafruit IoT box that makes it easy to scrape and display all kinds of JSON goodness from around the web, like NASA’s image of the day. GUI building is already baked in, so he just needed some oome open source playing card images and he was off.

The real gamble here might be the code he wrote; at 500+ lines, [Andy]’s probably pushing his luck with the PyPortal. But you know what they say — you can’t win if you don’t play. And if you want to improve your odds of winning, teach a robot to count cards for you. 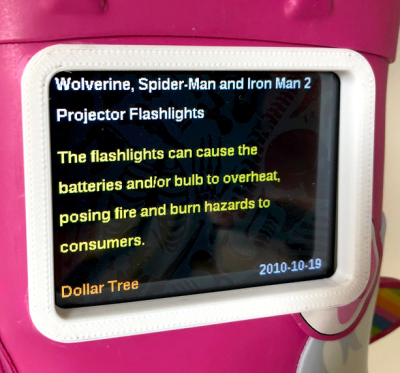