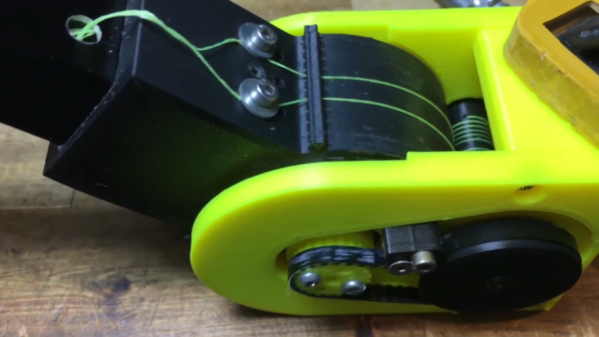 The convergence of mechanics and electronics in robotics brings with it a lot of challenges. Thanks to 3D printing and low cost components, it’s possible to quickly and easily experiment with a variety of robotics mechanism for various use cases. [Paul Gould] has been doing exactly this, and is giving us a taste of ten designs he will be open sourcing in the near future. Video after the break.

Three of the designs are capstan mechanisms, with different motors and layouts, tested for [Paul]’s latest quadruped robot. Capstan mechanisms are a few centuries old, and were originally used on sailing ships to give the required mechanical advantage to tension large sails and hoist cargo.

Two of the mechanisms employ GUS Simpson Drives, which use a combination of belts and a rolling joint. These were inspired by the LIMS2-AMBIDEX developed at the University of Korea. The ever-popular cycloidal gearbox also makes and appearance in the form of a high torque dual disk linked, two stage, NEMA17 driven gearbox.

[Paul] also built a room sized skycam-like claw robot for his daughter, suspended by four ball chain strings reeled in by four brushless motors with ESP32 powered motor controllers. We are looking forward to having a close look at these designs when [Paul] releases them, and to see how his quadruped robot will turn out.

[Thanks TTN for the tip!] 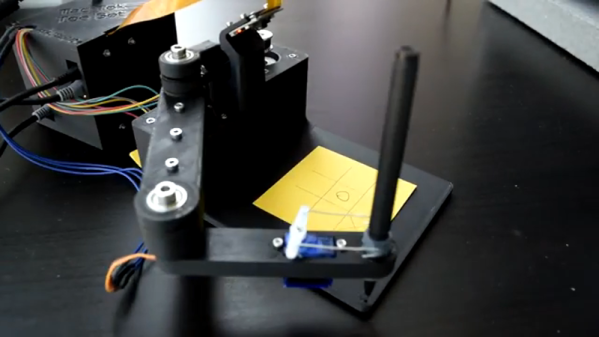 [3dprintedlife] is apparently a little bored. Instead of whiling away the time playing tic tac toe, he built an impressive tic tac toe robot named TOBOT. The robot uses a Rasberry Pi Zero and a Feather to control a two-axis robot arm that can draw the board and make moves using a pen. It also uses a simple computer vision system to look at the board to understand your move, and it has a voice too.

The other thing TOBOT has is a bad attitude. The robot wants to win. Badly. Check out the video below and you’ll see what we mean.

END_OF_DOCUMENT_TOKEN_TO_BE_REPLACED 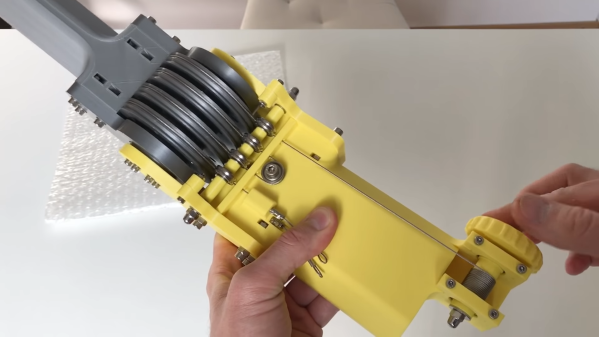 Even the oldest of mechanisms remain useful in modern technology. [Skyentific] has been messing with robotic joints for quite a while, and demonstrated an interesting way to use a pulley system in a robotic joint with quite a bit of mechanical advantage and zero backlash.

Inspired by the LIMS2-AMBIDEX robotic arm, the mechanism is effectively two counteracting sets of pulley, running of the same cable reel, with rollers allowing them to act around the bend of the joint. Increasing the mechanical advantage of the joint is simply a matter of adding pulleys and rollers. If this is difficult to envision, don’t work as [Skyentific] does an excellent job of explaining how the mechanism works using CAD models in the video below.

The mechanism is back drivable, which would allow it to be used for dynamic control using a motor with an encoder for position feedback. This could be a useful feature in walking robots that need to respond to dynamically changing terrain to stay upright, or in arms that need to push or pull without damaging anything. With properly tensioned cables, there is no backlash in the mechanism. Unfortunately cables can stretch over time, so it is something that needs to be considered when using this in a project.

Pulley systems have been with us for a very long time, and remain a very handy tool to have in your mechanical toolbox. A similar arrangement is used in the Da Vinci surgical robots to control their tiny manipulators. It would also be interesting to see this used in the already impressive robots of [James Bruton]. END_OF_DOCUMENT_TOKEN_TO_BE_REPLACED