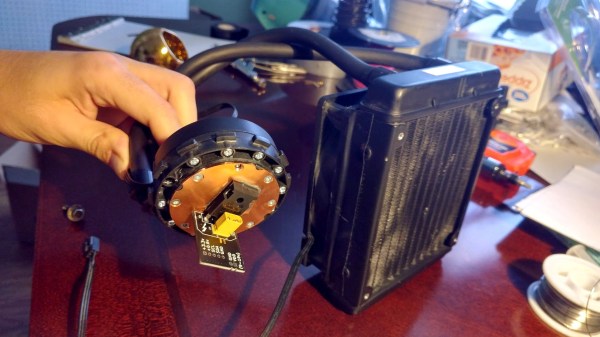 Problem: your electronic load works fine, except for the occasional MOSFET bursting into flames. Solution: do what [tbladykas] did, and build a water-cooled electronic load.

One can quibble that perhaps there are other ways to go about preventing your MOSFETs from burning, including changes to the electrical design. But he decided to take a page from [Kerry Wong]’s design book and go big. [Kerry]’s electronic load was air-cooled and capable of sinking 100 amps; [tbladykas] only needed 60 or 70 amps or so. Since he had an all-in-one liquid CPU cooler on hand, it was only natural to use that for cooling.

The IXYS linear MOSFET dangles off the end of the controller PCB, where the TO-247 device is soldered directly to the copper cold plate of the AiO cooler. This might seem sketchy as the solder could melt if things got out of hand, but then again drilling and tapping the cold plate could lead to leakage of the thermal coupling fluid. It hasn’t had any rigorous testing yet – his guesstimate is 300 Watts dissipation at this point – but as his primary endpoint was to stop the MOSFET fires, the exact details aren’t that important.

We’ve seen a fair number of liquid-cooled Raspberry Pis and Arduinos before, but we can’t find an example of a liquid-cooled electronic load. Perhaps [tbladykas] is onto something with this design. 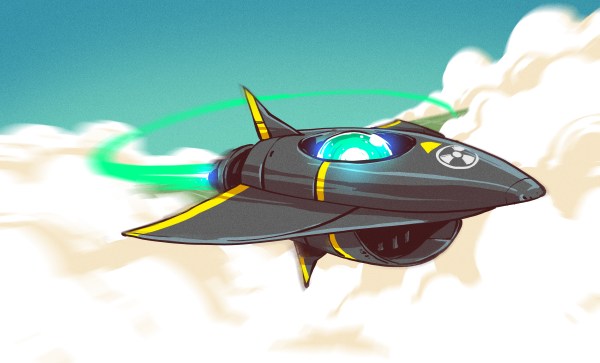 Such incredible claims might sound like saber rattling, or perhaps even something out of science fiction. But in reality, the basic technology for a nuclear-powered missile was developed and successfully tested nearly sixty years ago. Let’s take a look at this relic of the Cold War, and find out how Russia may be working to resolve some of the issues that lead to it being abandoned. END_OF_DOCUMENT_TOKEN_TO_BE_REPLACED 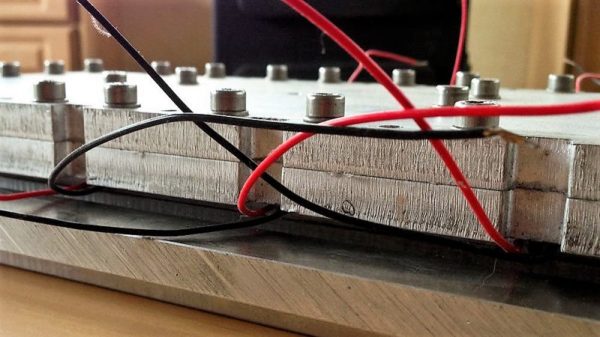 For off-grid renewable electricity, solar seems to make sense. Just throw some PV panels on the roof and you’re all set to stick it to the man, right? But the dirty little secret of the king of clean energy is that very few places on the planet get the sort of sunshine needed to make residential PV panels worth their installation cost in the short term, and the long-term value proposition isn’t very good either.

The drearier places on the planet might benefit from this high-power thermoelectric generator (TEG) developed and tested by [TegwynTwmffat] for use on a wood burning stove. The TEG modules [Tegwyn] used are commercially available and rated at 14.4 volts and 20 watts each. He wisely started his experiments with a single module; the video below shows the development of that prototype. The bulk of the work with TEGs is keeping the cold side of the module at a low enough temperature for decent performance, since the modules work better the higher the difference in temperature is across the module. A finned heatsink and a fan wouldn’t cut it for this application, so a water-cooled block was built to pump away the heat. A successful test led to scaling the generator up to 10 modules with a very impressive heatsink, which produced about 120 watts. Pretty good, but we wonder if some easy gains in performance would have come from using heat sink compound on the module surfaces.

Using thermal differences to generate electricity is nothing new, but a twist on the technique is getting attention lately as a potential clean energy source. And who knows? Maybe [TegwynTwmffat]’s or one of the other Hackaday Prize 2018 entries will break new ground and change the world. What’s your big idea?

END_OF_DOCUMENT_TOKEN_TO_BE_REPLACED

[HydroGraphix HeadQuarters] has earned his name with this one. While he is using mineral oil instead of hydro, he’s certainly done a nice job with the graphics of it. The ‘it’ in questions is an overclocked Raspberry Pi 3 in a transparent container filled with mineral oil, and with a circulating fan.

He’s had no problem running the Pi at 1.45 GHz while running a Nintendo 64 emulator, getting between 40 °C and 50 °C. The circulating fan is a five volt computer USB fan. It’s hard to tell if the oil is actually moving, but we’re pretty sure we see some doing so near the end of the video below the break.

Mineral oil is not electrically conductive, and is often used to prevent arcing between components on high voltage multiplier boards, but those components are always soldered together. If you’ve ever worked with mineral oil, you know that it creeps into every nook and cranny, making us wonder if it might work its way between some of the (non-soldered) contacts in the various USB connectors on this Raspberry Pi. Probably not, but those of us with experience with it can attest to it’s insidiousness.

END_OF_DOCUMENT_TOKEN_TO_BE_REPLACED 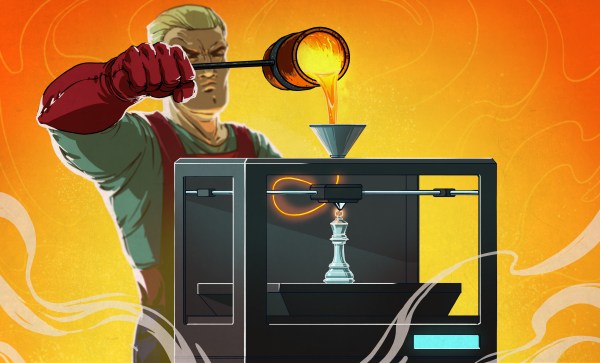