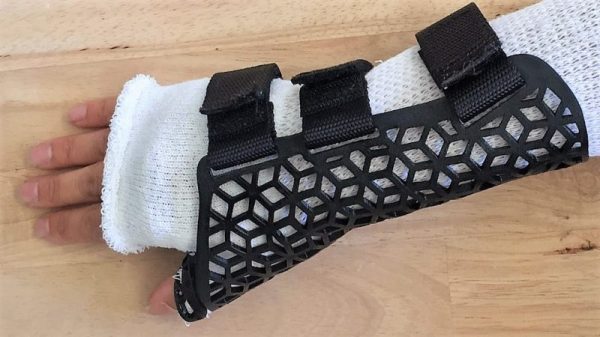 Repetitive motion injuries are no joke, often attended by crippling pain and the possibility of expensive surgery with a lengthy recovery. Early detection and treatment is the key, and for many wrist and hand injuries such as [ktchn_creations] case of “Blackberry thumb,” that includes immobilization with a rigid brace.

Sadly, the fiberglass brace her doctor left her with was somewhat lacking in the style department, and rather than being left with something unappealing to wear for half a year, she 3D-printed a stylish and functional wrist immobilizer. Starting in Autocad, she designed the outline of the brace, essentially an unwrapped version of the splint she started with. For breathability as well as aesthetics, a pattern of tessellated hexagons was used. The drawing was then exported to Fusion 360 for modeling and printing in black PLA. We were surprised to see that the brace was printed flat and later heat formed around her wrist, but that makes more sense than printing it in its final wrapped state. With a few velcro straps, the thermoformed brace was ready for service on the long road to recovery.

While [ktchn_creations] stipulates that looks were the motivator here, we’re not unaware that a 3D-printed brace might be more affordable than something dispensed by a doctor. But if you do build your own DIY appliance, whether for bracing your wrist, your knee, or your wayward teeth, you’ll want to run it past your health care provider, of course.

Becoming accomplished with a lathe is a powerful skillset, but it’s only half of the journey. Being clever comes later, and it’s the second part of the course. Patience is in there somewhere too, but let’s focus on being clever. [TimNummy] wants a knobbed bolt with critical parameters, so he makes his own. After the break, there is a sixty-second summary of the linked video.

Making stock hardware is a beginner’s tasks, so custom hardware requires ingenuity or expensive machinery. Adding finger notches to a bolthead is arbitrary with an indexing chuck, but one isn’t available. Instead, hex stock becomes a jig, and the flat sides are utilized to hold the workpiece at six intermittent angles. We can’t argue with the results which look like a part that would cost a pretty penny.

Using material found in the workshop is what being clever is all about. Hex brass stock comes with tight tolerances on the sides and angles so why not take advantage of that?

[TimNummy] can be seen on HaD for his Jeep dome light hack and an over-engineered mailbox flag. Did you miss [Quinn Dunki]’s piece on bootstrapping precision machine tools? Go check that out!

END_OF_DOCUMENT_TOKEN_TO_BE_REPLACED Here’s a project that is striving to develop a set of open source finger prosthesis. They are aimed at patients who have partial amputations. This means that part of the digit remains and can be used as the motive force behind a well designed mechanical prosthesis like you see above. This uses levers, pulleys, and wire to move a gripper in much the same way the pad of a pointer finger works. There’s even a video (embedded after the jump) which shows it being used to grab a toothpick from a dispenser… pretty impressive. This is similar to the prosthesis we saw in August which managed to work without pulleys and wire.

This isn’t limited to fingers. The same posts that shows off the unit seen above also includes a prosthetic thumb. The leverage for that design is provided by a woven nylon strap which attaches to a bracelet on the wrist.