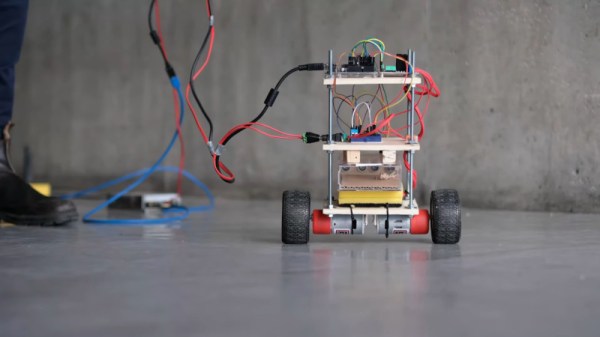 There are many people who find being around insects uncomfortable. This is understandable, and only likely to get worse as technology gives these multi-legged critters augmented bodies to roam around with. [tech_support], for one, welcomes our new arthropod overlords, and has even built them a sweet new ride to get around in.

The build follows the usual hallmarks of a self-balancing bot, with a couple of interesting twists. There’s twin brushed motors for drive, an an Arduino Uno running the show. Instead of the more usual pedestrian IMUs however, this rig employs the Bosch BNO055 Absolute Orientation Sensor. This combines a magnetometer, gyroscope, and accelerometer all on a single die, and handles all the complicated sensor fusion maths onboard. This allows it to output simpler and more readily usable orientation data.

The real party piece is even more interesting, however. Rather than radio control or a line following algorithm, this self-balancer instead gets its very own insect pilot. The insect is placed in a small chamber with ultrasonic sensors used to determine its position. The insect may then control the movement of the bot by moving around this chamber itself. The team have even developed a variety of codes to dial in the sensor system for different types of insect.

It’s not the first time we’ve seen insects augmented with robotic hardware, and we doubt it will be the last. If you’re working on a mad science project of your own, drop us a line. Video after the break.

END_OF_DOCUMENT_TOKEN_TO_BE_REPLACED 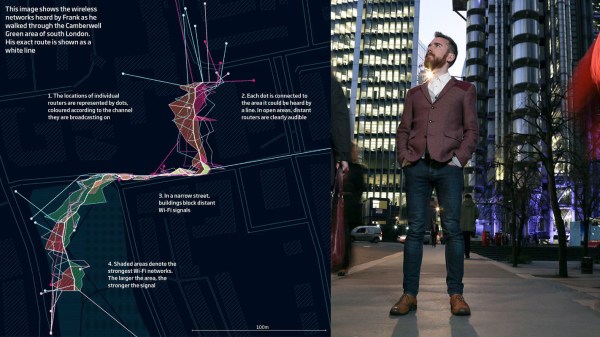 We are swimming in radio transmissions from all around, and if you live above the ground floor, they are coming at you from below as well. Humans do not have a sensory organ for recognizing radio signals, but we have lots of hardware which can make sense of it. The chances are good that you are looking at one such device right now. [Frank Swain] has leaped from merely accepting the omnipresent signals from WiFi routers and portable devices to listening in on them. The audio signals are mere soundwaves, so he is not listening to every tweet and email password, merely a representation of the data’s presence. There is a sample below the break, and it sounds like a Geiger counter playing PIN•BOT.

We experience only the most minuscule sliver of information coming at us at any given moment. Machines to hack that gap are not had to find on these pages so [Frank] is in good company. Magnetosensory is a popular choice for people with a poor sense of direction. Echolocation is perfect for fans of Daredevil. Delivering new sensations could be easier than ever with high-resolution tactile displays. Detect some rather intimate data with ‘SHE BON.’

END_OF_DOCUMENT_TOKEN_TO_BE_REPLACED

While medical facilities continue to improve worldwide, access to expensive treatments still eludes a vast amount of people. Especially when it comes to prosthetics, a lot of people won’t be able to afford something so personalized even though the need for assistive devices is extremely high. With that in mind, [Guillermo Herrera-Arcos] started working on ALICE, a robotic exoskeleton that is low-cost, easy to build, and as an added bonus, 100% Open Source.

ALICE’s creators envision that the exoskeleton will have applications in rehabilitation, human augmentation, and even gaming. Also, since it’s Open Source, it could also be used as a platform for STEM students to learn from. Currently, the team is testing electronics in the legs of the exoskeleton, but they have already come a long way with their control system and getting a workable prototype in place. Moving into the future, the creators, as well as anyone else who develops something on this platform, will always be improving it and building upon it thanks to the nature of Open Source hardware.

END_OF_DOCUMENT_TOKEN_TO_BE_REPLACED 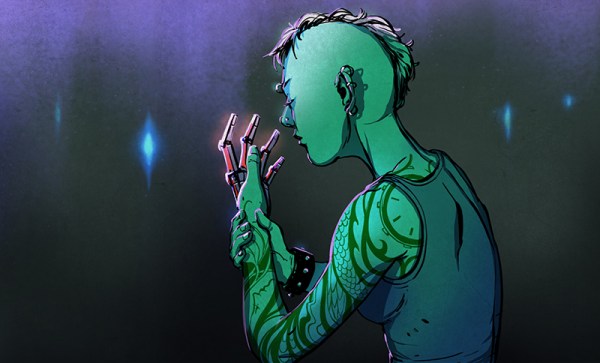 “We accept pain as a price of doing business, even if it is just for aesthetic purposes. You want to put a magnet in your finger, a doctor will ask you why; a mod artist will ask when you can start.” As with many other people who are part of the growing grinder movement, [Adam] has taken a step that many would consider extreme – he’s begun to augment his body.

Grinders – men and women who hack their own bodies – are pushing the boundaries of what is currently possible when it comes to human augmentation. They’re hackers at heart, pursuing on an amateur level what they can’t get from the consumer market. Human augmentation is a concept that is featured heavily in science fiction and futurism, but the assumption most people have is that those kinds of advancements will come from medical or technology companies.

Instead, we’re seeing augmentation begin in the basements of hackers and in the back rooms of piercing studios. The domain of grinders is the space where body modification and hacking meet. It mixes the same willingness to modify one’s body that is common among the tattooed and pierced, and adds an interest in hacking technology that you find in hackerspaces around the world. When those two qualities intersect, you have a potential grinder.