It’s officially October, and that means we can start unleashing the Halloween hacks. Take for example this restless skeleton that master automaton maker [Greg Zumwalt] has doomed to spend eternity inside of a useless box. If that wasn’t enough to wake the dead, every time some joker pushes the button, these blinky lights come on. Hey, at least there’s no opera music.

The ironic thing about useless machines is that there are a ton of ways to make them. This spooktacular Halloween-themed do-nothing box doesn’t use a microcontroller, or even a 555 — it’s purely electromechanical. When the button is pressed, two AAAs power a small gear motor that simultaneously lifts the lid, raises the dead, and twists him a quarter turn so he can close the lid and put himself back to eternal rest.

The intricately-printed skeleton doesn’t really push the button — he’s far too dead and frail for that. The gear motor also turns a dual-lobe cam that activates a pair of roller switches that handle the candles and lower Mr. Bones back into his crypt. Clear as blood? Skitter past the break for a closer look at the mechanism.

Halloween or not, we love a good useless machine around these parts. Here’s one that incorporates a real candle and who could forget this octo-switched beast?

END_OF_DOCUMENT_TOKEN_TO_BE_REPLACED

Useless machines might not do any work or produce anything of value on their own, but they can be a great learning tool, and are often beautifully crafted as an expression of the builder’s artistic talents. By and large, they consist of a switch to turn the machine on, and an arm that switches the machine back off in response to this. Vladimir had a different take, and built this twisting vase useless machine instead.

The build references the twisting vases we saw recently – [Vladimir] loved the way they so elegantly opened and closed, and decided to base the build around that. The useless part of the machine is the lifting mechanism – a servo turns a pulley, which uses a magnet on a rope to lift the vase. Upon reaching a certain point, the vase drops, and the magnet is once again lowered to lift it back up again.

The first prototype used a simple delay-based timing loop to determine when to drop the magnet again, however over time this would fall out of sync with the vase’s position and the magnet would fail to attach to the vase. For the second version, [Vladimir] improved things by using a limit switch to determine the position of the vase instead of running on timing alone. The machine’s frame was also rebuilt using copper pipe, which allowed the wires and servo to be hidden from sight. The second revision of the project shows the difference polish can make – differences like these make the machine more suitable for display as a curio in a stylish home setting, rather then a messy project that lives on the workbench only.

Be sure to check out the video of the project below the break. For a simpler useless machine, check out this build.
END_OF_DOCUMENT_TOKEN_TO_BE_REPLACED

Marble machines are the kind of useless mechanisms that everybody loves. Their sole purpose is to route marbles through different paths for your viewing pleasure. They can be extremely complicated contraptions, and sometimes that is the precisely the point. However, even a simple mechanism can be delightful to watch. [Denha] just uploaded his latest creation, using a spring as elevator and a simple zig-zag path.

The construction is relatively simple, a spring with the appropriate pitch for the steel balls size is used as an elevator. The spring is driven by a small electric motor via a couple of gears, and a wooden zig-zag path for the marbles lies next to the spring. The marbles go up with the spring and return in the wooden path in an endless journey.

We believe that a serious hacker should build a marble machine at least once in their life. We have posted several of them, from simple ones to other more complicated designs that require careful craftsmanship. [Denha]’s Youtube channel is full of good ideas to inspire your first project. In any case, watching a marble machine at work is quite a nice, relaxing experience.

END_OF_DOCUMENT_TOKEN_TO_BE_REPLACED

In a time when we’re inundated with talk of an impending AI apocalypse it’s nice to see an AI that’s intentionally useless. That AI is HAL 9000. No, not the conflicted HAL from the movie 2001: A Space Odyssey but the World’s Biggest AI Useless Machine HAL built by [Rafael], [Mickey] and [Eyal] for GeekCon 2016 in Israel.

Standing tall, shiny and black, the box it’s housed in reminds us a bit of the monolith from the movie. But, in a watchful position near the top is HAL’s red eye. As we approach, HAL’s voice from the movie speaks to us asking “Just what do you think you’re doing, Dave?” as the eye changes diameter in keeping with the speech’s amplitude. And at the bottom is a bright, yellow lever marked ON, which of course we just have to turn off. When we do, a panel opens up below it and a rod extends upward to turn the lever back to the ON position.

Behind the scenes are two Arduinos. One Arduino manages servos for the panel and rod as well as playing random clips of HAL from the movie. The other Arduino uses the Arduino TVout library to output to a projector that sits behind the red diffuser that is the eye. That Arduino also takes input from a microphone and based on the amplitude, has the projector project a white circle of corresponding diameter, making the eye’s appearance change. You can see all this in action in the video after the break.

END_OF_DOCUMENT_TOKEN_TO_BE_REPLACED

How do artificial intelligences get so intelligent? The same way we do, they get a library card and head on over to read up on their favorite topics. Or at least that’s the joke that [Jakob Werner] is playing with in his automaton art piece, “A Machine Learning” (Google translated here).

Simulating a reading machine, a pair of eyeballs on stalks scan left-right and slowly work their way down the page as another arm swings around and flips to the next one. It’s all done with hand-crafted wooden gears, in contrast to the high-tech subject matter. It’s an art piece, and you can tell that [Jakob] has paid attention to how it looks. (The all-wooden rollers are sweet.) But it’s also a “useless machine” with a punch-line.

Is it a Turing test? How can we tell that the machine isn’t reading? What about “real” AIs? Are they learning or do they just seem to be? OK, Google’s DeepMind is made of silicon and electricity instead of wood, but does that actually change anything? It’s art, so you get license to think crazy thoughts like this.

We’ve covered a few, less conceptual, useless machines here. Here is one of our favorite. Don’t hesitate to peruse them all.

Marvin Minsky, one of the early pioneers of neural networks, died on Sunday at the age of 88.

The obituary in the Washington Post paints a fantastic picture of his life. Minsky was friends with Richard Feynman, Isaac Asimov, Arthur C. Clarke, and Stanley Kubrick. He studied under Claude Shannon, worked with Alan Turing, had frequent conversations with John Von Neumann, and had lunch with Albert Einstein.

Minsky’s big ideas were really big. He built one of the first artificial neural networks, but was aiming higher — toward machines that could actually think rather than simply classify data. This was one of the driving forces behind his book, Perceptrons, that showed some of the limitations in the type of neural networks (single-layer, feedforward) that were being used at the time. He wanted something more.

Minsky’s book The Society of Mind is interesting because it reframes the problem of human thought from being a single top-down process to being a collaboration between many different brain regions, the nervous system, and indeed the body as a whole. This “connectionist” theme would become influential both in cognitive science and in robotics.

In short, Minksy was convinced that complex problems often had necessarily complex solutions. In research projects, he was in for the long-term, and encouraged a bottom-up design procedure where many smaller elements combined into a complicated whole. “The secret of what something means lies in how it connects to other things we know. That’s why it’s almost always wrong to seek the “real meaning” of anything. A thing with just one meaning has scarcely any meaning at all.” 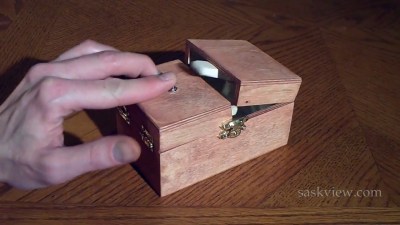 Minsky was a very deep thinker, but he kept grounded by also being a playful inventor. Minsky is credited with inventing the “ultimate machine” which would pop up in modern geek culture and shared numerous times on Hackaday as the “most useless machine”. He inspired Claude Shannon to build one. Arthur C. Clarke said, “There is something unspeakably sinister about a machine that does nothing — absolutely nothing — except switch itself off.”

He also co-designed the Triadex Muse, which was an early synthesizer and sequencer and “automatic composer” that creates fairly complex and original patterns with minimal input. It’s an obvious offshoot of his explorations in artificial intelligence, and on our bucket list of must-play-with electronic instruments.

Minsky’s web site at MIT has a number of his essays, and the full text of “The Society of Mind”, all available for your reading pleasure. It’s worth a bit of your time, not just in memoriam of a great thinker and a wacky inventor, but also because we bet you’ll see the world a little bit differently afterwards. That’s a legacy that lasts.

The Useless Machine – a machine with a toggle switch, a mechanical arm, and something that only exists to turn itself off – is a staple of Instructables and builds from random workbenches the world over. It’s cliché, and now hackaday.io has a better project: The Annoying Machine, a machine that exists purely to annoy.

According to [unigamer], the Annoying Machine is the evil cousin of the Useless Machine. On the outside, it’s extremely simple: a switch labeled ‘on’ and ‘off’, and a hole for an LED. Turn the switch on, and the Annoying Machine will emit an annoying buzzing sound. Switch the Machine off, and the buzzing will go away. Then the switch will flick itself back to on. Insidious.

A switch and buzzer is easy enough, but the key component of this build is an actuated rocker switch. It’s basically a normal toggle switch with two additional terminals for a coil that can move the switch back and forth electronically. Throw in an Arduino, buzzer, battery, and a boost converter for the switch, and that’s just about all there is to it.

How to deactivate the Annoying Machine? There’s an accelerometer attached to the Arduino, and by throwing the box up in the air after flicking the switch off, it will reset. There are already plans for a Version 2 of the Annoying Machine that will be even louder and made out of aluminum. Anything to protect it from the inevitable hammers of frustration.