Curious Inventor pointed out a cache of training materials provided by IPC. IPC is a trade organization that publishes standards for producing and evaluating electronics. They’re great looking full color guides that most hobbyists will probably never get their hands on. They have low resolution video demos as well. Go snag them now in case they go away! The iphone-dev team has officially stated “all that remains is implementation“. They’ve developed all the pieces they need to perform a software unlock for the iPhone 3G, now it’s just a matter of putting them together in user friendly fashion. They’ve managed to run unsigned code on the baseband, developed custom AT tools, and are now showing injection of a background task. They will combine all of these techniques to override the carrier lock baseband code. As usual, they warn against performing any official firmware updates to the phone.

Digital Pictures Interactive has put together a great augmented reality demo. Unlike many others, it’s entirely Flash based, so there’s no install necessary. Print out the custom symbol and try it out for yourself in your browser. Augmented reality refers to any mashup that combines computer generated content with a live video stream. We see great potential for this technology and the large number of consumer webcams would certainly help consumer adoption. Video demo embedded below. END_OF_DOCUMENT_TOKEN_TO_BE_REPLACED 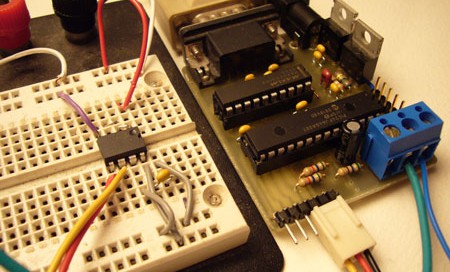 We’re always excited to get a new chip or SIM card to interface, but our enthusiasm is often dampened by the prototyping process. Interfacing any chip usually means breadboarding a circuit, writing code, and hauling out the programmer; maybe even a prototyping PCB.

A few years ago we built the first ‘Bus Pirate’, a universal bus interface that talks to most chips from a PC serial terminal. Several standard serial protocols are supported at 3.3-5volts, including I2C, SPI, and asynchronous serial. Additional ‘raw’ 2- and 3- wire libraries can interface almost any proprietary serial protocols. Since this has been such a useful tool for us, we cleaned up the code, documented the design, and released it here with specs, schematic, and source code.

END_OF_DOCUMENT_TOKEN_TO_BE_REPLACED

[Jeremiah Grossman] and [Eric Lawrence] will be presenting on clickjacking and browser security in an online seminar tomorrow. Clickjacking allows an attacker to transparently place links exactly where a user would be clicking, essentially forcing the user to perform actions without their knowledge. This method of attack has been known for a few years, but researchers have focused their attention on it lately because they feel the threat has been underestimated. Recently, Adobe patched a vulnerability specifically because of this issue. Tune in tomorrow for more info on the attack.

In a bold move, Silicon Graphics has decided to see how much crap many cores they can shove in one box. The Molecule is 10,000 core rackmount machine designed to leverage low cost consumer CPUs like the Intel Atom. It emphasizes high memory bandwidth and throughput between CPUs. While this sort of space efficiency is interesting it’s certainly going to take some serious cooling to get designs like this off the ground.