[Manekinen] built a very responsive spectrum analyzer. The components at the party are what you’d expect, an ATmega8 does the hard work interpreting data from the LM324 op-amp. This build stands out because it is fast and configurable. In fact, the explanation of the calibration process is where this project shines.

Instead of using water, an HD44780 module displays the spectrum data. The device currently supports several different character displays including 16×2, 20×2, 24×2, and 20×2. We’ve embedded a video of a 20×4 VFD in action after the break. As the video progresses, watch for the Polish words that pop up. This corresponds to the brightness and sensitivity being adjusted with the 5-button keyboard.

END_OF_DOCUMENT_TOKEN_TO_BE_REPLACED

If you didn’t get the geeky watch you wanted for Christmas you should consider building yourself a MakerBotWatch. The watch is an Arduino, using an ATmega328 microcontroller running the bootloader. The watch has two concentric circles of LEDs for minutes and hours. A vertical row of four LEDs adds in the additional resolution needed to get 60 minutes on the watch face.

The schematic and board layout are available from an SVN repository so you can make your own board. The device will go into production as a kit but currently the laser-cut bezel will not be part of it.

Now you can have a Zilog computer in the form factor of a matchbox. The RamBlade is a tiny PCB that uses a Parallax Propeller IC to implement the CP/M language. The OS is stored on a microSD card, with a four-pin serial interface (3V3, GND, SO, SI) that allows operation via a terminal program.

Smaller and more resilient than building your own from ancient logic chips, we see this a way to get a whole new set of people interested in this old technology.

[Dennis] got snowed in after the biggest storm in the history of the state hit. Like any good hacker he didn’t let the time go to waste. He decided to dig out his Neo Freerunner to give it a decent battery and a new OS.

The original battery for the Freerunner has a controller board integrated into the package. [Dennis] pulled out the board and attached it to a portable DVD player battery. After running it through a discharge cycle with another hack of his, the board learned the new battery capacity. The larger battery plus a fast-charger from SparkFun required a larger case. He made it happen by combining a 2.5″ HDD case with the original body courtesy of some JB weld. The final portion of the hack was to load up Android which is as simple as untarring the package onto an SD card.

It’s a bit big, but the battery will last and he’s got an open platform. Nice work!

If you’re a fan of biometrics this game is for you. It uses a homemade EEG to facilitate simple control. This is along the same lines as the Force Trainer hacks but this homebrew hardware is fun to look at. The success of the project can be seen in the video of a simple game they developed.

[Jonny] wanted to trigger his Nikon camera remotely but was unhappy with the functionality of the IR remote. He hacked together an RF remote and receiver that still uses the IR functionality of the camera, but allows for the geographic freedom of Radio Frequency. Not as advanced as some we’ve seen but it meets his specifications.

[Jan] tipped us off about a CNC mill that her friend made. The machine turned out beautifully even though very few tools were used to produce it. We love to pour over these builds so if you’ve done one, document it and send it in.

Neutering the On Demand Button

[Dan] hated his Comcast remote because the On Demand button could be hit by mistake. This was usually when trying to unpause live TV. The remainder of the show couldn’t be viewed just because the On Demand menu launched. Simplicity is king. He fixed this by placing two small paper rolls between the button and the circuit board. This way the button can still be used but only if you press pretty hard.

Christmas may be over, but we still have a couple of cool holiday related hacks for you. One being [Alpay’s] Twitter based interactive Christmas tree ornaments.

We tried to dig up some more information, but it thus far appears a laptop running Processing searches Twitter for specific Christmas related words (like 1337, that’s Christmas-y), sends a buffer to one of three Arduinos which in turn light up a specific ornament. You can check out a live stream here.

For those wanting a bit more information on Arduino and controlling holiday lights, check out [Alpay’s] GE health care version of Twitter lights, or our previous post on controlling Christmas trees, or you might even try [Michael’s] $10 Walmart light controller. 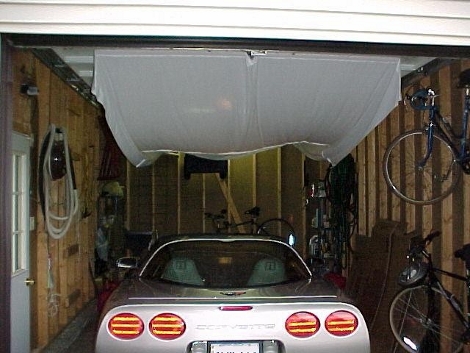 [Mike] covers his car whenever he puts it into the garage because the top is always open. After years of this ritual he decided to upgrade his garage to automatically cover the vehicle (link dead, try the Internet Archive version). The car cover, made from a few bed sheets, attaches to the bottom of the garage door. At the front of the stall the cover has two half-pound weights sewn in with plenty of padding to protect the car’s finish. Ropes attach to these weights, travel through a pulley system, and connect to the garage door opener carriage. This $65 dollar solution makes sure [Mike’s] car is always taken care of.