This project, by an unknown hacker, patches into an electric typewriter and uses it as a Teletype. An AVR ATmega168 microcontroller patches into the key matrix of the typewriter which allows it to artificially type. Now, data can be sent over a serial connection to the AVR for output on the typewriter.

We’re not quite sure what this is going to be used for.  We’ve seen hacks like this for Twitter reading in the past but he makes no mention of that type of use. Personally, we’d like to have this just to “print” out the occasional letter. Typewriters are so rarely used these days it would be a bit peculiar to get a letter that has the dimpled impressions associated with slamming a die into a piece of paper.

We’re not going to debate the necessity of this one. [Todd] plays online games that will log you out after a few minutes of inactivity. To resolve this, he has created a circuit that mimics keyboard activity at a preset interval. While he notes that there is software for this, he points out that many games block the software. They can’t block legitimate keyboard activity.

This tip was submitted by [Mike], with the original information seen in this post. When I passed the story along to our writer [Mike Szczys] I didn’t send along the entire email conversation. This bot is noteworthy because it has taught itself to walk. In the build log you can learn about how it has created its gait and altered it based off of the vision. There are also some great pictures of prototypes there too. While we can all agree that it isn’t as impressive looking initially as the A-Pod, remember that it wasn’t programmed to look impressive. If you’ve played any of the Splinter Cell games you’ll remember the PDA that [Sam Fisher] carried around with him.  What if you could have one of your own when playing capture-the-flag? [Brad] has created the ZephyrEye as an electronic command and communications device for real-life games.

Each player carries around their own unit. The ZephyrEye has a GPS module, Xbee module, LCD screen, and control buttons. This allows a player to setup one of several different games, map out the game field including base locations and flag locations, and monitor a time limit and scoring. Other players can join the game in progress. The best part? The GPS modules report tracking to each handheld and act as radar for your team and the enemy team. We’ve got a couple of demo videos after the break.

Words can’t describe how delighted this would have made us back in the day. We don’t play outside with the other neighborhood kids anymore (insert dirty-old-man joke here) but that might change just because of this device. We may end up joining [Barney Stinson] for some amazingly awesome laser-tag games after all.

[Brad’s] posted hardware information and source code so that you can use to throw together a dozen or so units. We think the next version should incorporate a wearable display.

END_OF_DOCUMENT_TOKEN_TO_BE_REPLACED This spider-bot was built by [Zhanx] during his deployment in Iraq. He didn’t have prior hardware building experience and started out on this project when he received an Arduino to play with in September. Must be a fast learner! The parts are laser-cut from ABS plastic and connected to 24 servos. He sourced an SSC-32 serial servo control board to take care of the motor connections.

[Zhanx] has since migrated from the Arduino to a BeagleBoard which you can see perched atop the body in the video after the break. This should give him plenty of speed and power to improve the movement routines. There’s some nice work here but adding rubber feet, like on yesterday’s hexapod, wouldn’t hurt.

END_OF_DOCUMENT_TOKEN_TO_BE_REPLACED 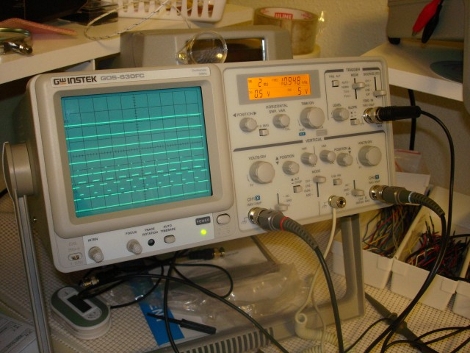 [Mike Bradley] wanted to use his oscilloscope to display 8 channels of digital signals. Alas, the analog unit didn’t have this capability. Not to worry, he threw together an adapter module that does the trick. Using a PIC 18F26K20 microcontroller he inputs four or eight channel digital logic (at 5V) and filters the output to an analog signal that the oscilloscope can interpret. What you see in the photo above is the result. [Dwight’s] been working on a long-term project to add a status board for the ski runs at Copper Mountain ski resort. The board will feature an 8×8 LED module for each run that displays a green O for open trails, a green G for groomed trails, and a red X for closed trails. He’s also got a status board with LEDs embedded in a trail map.

The system relies on SPI for each LED module. An Arduino Mega uses a Xbee module to pull down XML data wirelessly and display it on this board. Since the trail report is already available online it’s just a matter of parsing the data in a useful way.

He’s not quite done with the whole thing yet, but keep an eye out for it if you are planning to ski Copper Mountain.