What Maker Faire would be complete without teaching children the joys of jiggling and twisting locks until they’ve opened? Toool, the open organisation of lockpickers made their way to New York this weekend to show off their bumping skills and get the kids interested in manipulating small mechanical devices.

The guys from Toool had a very cool setup – just a bunch of tables and chairs with a few picks and torsion wrenches. There were a few classic Master Locks on the table, but also a series of six tumbler locks each labeled with a number 1 through 6 signifying how many pins were in the lock. The idea is to get someone started on a one-pin lock, and eventually have them work their way up to the full six pins.

In the video after the break, one of the more animated guys from Toool explains why they were there, and also shows off picking a Master Lock twice in under 30 seconds. Seriously, people: educate yourself on locks before buying one.

END_OF_DOCUMENT_TOKEN_TO_BE_REPLACED A Brewster Angle Microscope (BAM) can run you around $100,000. If you don’t have that lying around you could just use some LEGO pieces to build your own. Having been faced with no budget to buy the hardware, and needing the data to finish his PhD, [Matthew] figured out a way to build something passable on the cheap.

These microscopes bounce a light source off of a pool of water and into the lens of a camera. The thing is the angle of the sender and receiver must be just perfect at 53.1 degrees. [Matthew] was able to afford a used camera, and started experimenting with some lab equipment to mount the rig. But he just couldn’t get the adjustments right. Since he had to move the mounting hardware by hand it was impossible not to over or under shoot the corrections. But then he had a eureka moment. LEGO pieces have very accurate tolerances, and you can get geared and motorized parts. He leveraged the quality of the toy into a BAM whose alignment can be tweak with great precision.

It may not look like much, but you can see stearic acid floating through the microscope’s field of vision in the clip after the break. This is exactly the type of observations he needed to perform. Of course if you just need a microscope you can use a laser and a drop of water.

END_OF_DOCUMENT_TOKEN_TO_BE_REPLACED 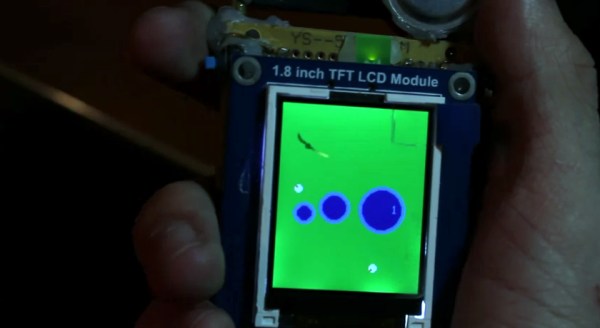 The hardware that went into this Arduino gaming console is just fine. But the coding that produced this game called Twisted SNAKE is beyond compare. [Rodot] has programmed several games for the hardware, which uses an Arduino, 160×168 TFT screen, a 3 axis accelerometer, and two input buttons. If you’re interested, there is a forum thread in which he talks a bit more about the hardware design. But you’re not going to want to pass up either of the two videos embedded after the break.

The first clip shows off a bouncing-ball platforming game. The accelerometer moves the ball back and forth, and the top scrolling level brings more ledges into play. This in itself is a great game. But the Twisted SNAKE game shown off in the second video makes our own ARM-based Snake game look like a 3-year-old programmed it. [Rodot] filled up all of the program memory of the ATmega328 chip to  make this happen. There’s a menu system which allows for color themes and difficulty selection. The game play itself lets the snake travel anywhere it wishes with the tail following behind in graceful curves. Wow!

END_OF_DOCUMENT_TOKEN_TO_BE_REPLACED Take a look at BrewPi, a fermentation controller made with a Raspberry Pi. The project hacks control of a refrigerator and a light bulb into the pervue of a Raspberry Pi board. The RPi itself brings network connectivity to the mix. What you end up with is an already highly configurable fermentation system which is perched to receive even more features moving forward.

The man behind the system is [Elco Jacobs]. You may remember his name from the UberFridge project. That was a router-based fermentation controller. This keeps the same great hardware as well as online graphing and control features such as setting plot points for ramping temperature up and down. For now there’s also an Arduino being used which takes care of the hardware switching via json packets received from the RPi. But now that he’s worked out most of the bugs it should be fairly painless to dump the Arduino and build a proper RPi shield for this purpose. It sounds like [Andrew] is trying to build a Pavlovian response into his behavior when it comes to online gaming. He wants to make sure he doesn’t miss out when all his friends are online, so he built this traffic signal to monitor Xbox Live activity. It will illuminate the lights, and drive the meters differently based on which of his friends are currently online. When the light’s green, he drops everything a grabs a controller.

The base of the light is a black project box. Inside you’ll find the Arduino compatible chip which drives the device mounted on a piece of protoboard. A WIZnet W5100 adds network connectivity at the low price of around $25. There is one problem with the setup. The API which [Andrew] found doesn’t use any authentication. This means that he can only see the public status of his friends; anyone who has set their online status set to private will always register as ‘online’. If you know of an existing Xbox Live API that would solve this issue we’d love to hear from you in the comments. 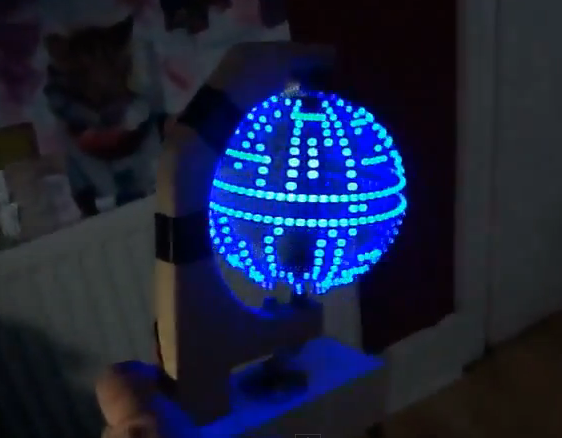 Building a Persistence of Vision globe is pretty awesome, but overlaying a Death Star pattern on the display takes it to the next level of geekery. Like us, [Jason] has wanted to build one of these for a long time. His success pushes us one step closer to taking the plunge and we hope it will inspire you to give it a shot too.

As he mentions in the beginning of his write up, the mechanical bits of these displays are really where the problems lie. Specifically, you need to find a way to transfer power to the spinning display. In this case use went with some DC motor brushes. These are replacement parts through which he drilled a hole to accept the metal axles on top and bottom. We hadn’t seen this technique before, but since motor brush replacements are easy to find and only cost a few bucks we’d say it’s a great idea.

The 24 blue LEDs that make up the display are all on one side of the PCB. They’re driven by an ATmega328 running the Arduino bootloader. [Jason] uses an FTDI adapter to program the chip. Don’t miss the video embedded after the break.