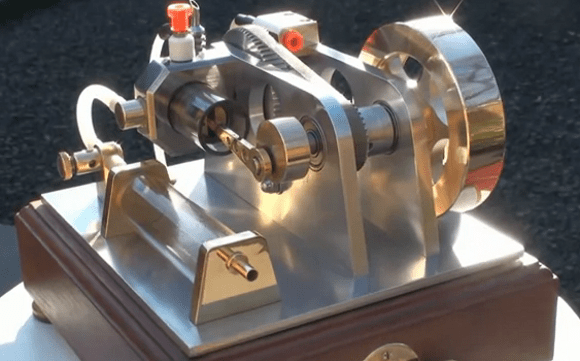 We know a lot about toggling bits in a register, but only a bit about how engines work. This one inspires us to throw ourselves into the field with reckless abandon. [Huib Visser] built this glass cylinder four-stroke engine and he took great care to make it beautiful. We don’t need our projects to be polished and gleaming, but we have to admit that this the opposite of what we see when popping the hood on our 12-year-old rust bucket out front.

You can’t see it in this image, but just on the other side of the fly-wheel is a smaller wheel with a cord wrapped around it that acts as the pull start. This gets the toothed timing belt going along with the cylinder. As part of the demo video we get a good look at how the rotary intake and exhaust valves work. [Huib] also took the time to demonstrate how the rare earth magnets and  reed switch synchronize the ignition system.

You won’t want to miss the end of the video which show it in action as It burns Coleman fuel (white gas) and is lubricated with WD-40. This is jaw dropping and it works like a charm, but still not that far removed from the concepts seen in [Lou’s] hardware store engine project.

UPDATE: Here’s write up this engine (translated) [Thanks ChalkBored]

END_OF_DOCUMENT_TOKEN_TO_BE_REPLACED 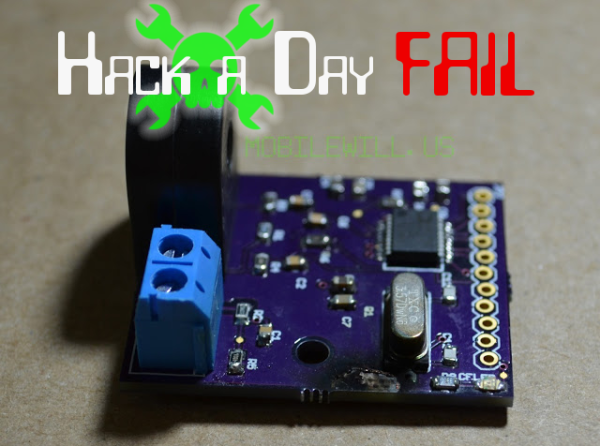 We’re sure you’ve all been waiting on the edge of your seats to see whose project makes it as the first Hackaday Fail of the Week. Wait no longer, it’s [Mobile Will] with his woeful tale about monitoring AC current usage.

He had been working on a microcontroller actuated mains outlet project and wanted an accurate way to measure the AC current being used by the device connected to it. The ADE7753 energy metering IC was perfect for this so he designed the board above and ordered it up from OSH Park. After populating the components he hooked it up to his Arduino for a test run, and poof! Magic blue smoke arose from the board. As you’ve probably guessed — this also fried the Arduino, actually melting the plastic housing of the jumper wire that carried the rampant current. Thanks to the designers of the USB portion of his motherboard he didn’t lose the computer to as the current protection kicked in, requiring a reboot to reset it.

We can’t wait to hear the conversation in the comments. But as this is our first FotW post we’d like to remind you: [Mobile Will] already knows he screwed up, so no ripping on his skills or other non-productive dibble. Let’s keep this conversation productive, like what caused this? He still isn’t completely sure and that would be useful information for designing future iterations. Update: here’s the schematic and board artwork.

END_OF_DOCUMENT_TOKEN_TO_BE_REPLACED

Years ago, someone at the bio-instrumentation lab at MIT needed to change a CMOS battery in the controller for a three axis mill. This reset the machine’s BIOS and was widely regarded as a bad move. The mill sat in the lab for a few years before  Prof. [Ian Hunter] donated it to MITERS – the student shop at MIT. And so the task of repairing a machine that cost as much as a car fell upon a plucky group of students.

The machine – a  Dyna-Myte 1007 has a 10″x7″x10″ work area, pneumatic tool changers and carousel, and the working for a fourth axis. It is. however, driven by an ancient Pentium computer running DOS with all the fun of ISA slots and IRQs that entails.

The MITERS began their repair by digging around in the software configuration, finding the axis drive is controlled via IRQ 3, which was currently occupied by COM 2. Changing that in the BIOS let the computer control the axes and, with a few solenoids and an air compressor, the tool carousel also worked.

With a bit of digging around, the MITERS also got the spindle working, giving them a very awesome and very expensive CNC milling machine for free. Even though the computer could be replaced with a $35 Raspberry Pi, we really have to admire the MITERS for fixing what they already had; it’s a cheaper and much, much faster way to get their new toy up and running.

END_OF_DOCUMENT_TOKEN_TO_BE_REPLACED 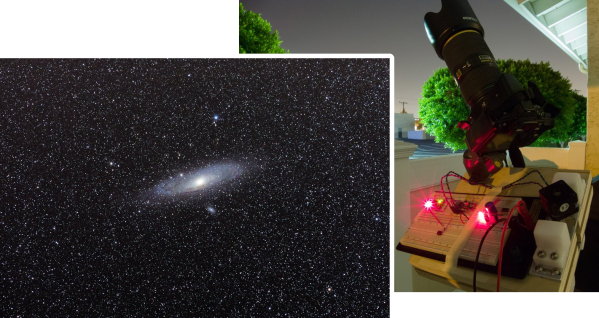 That’s a pretty amazing image to catch peering out from your back balcony. The rig used to record such a gem is seen on the right. It’s called a Barn Door tracker and was built by [DCH972]. Details for this build are scattered all over the place, there’s a video (also found below), another album of some of the best images, and plenty of background info in the Reddit thread.

This design is also know as a Haig or Scotch mount. While we’re dropping links all over the place check out the Wikipedia page on the topic. The point of the system is to move the camera in such a way so that the stars appear to hold in the same place even though the earth is moving. There’s an ATmega32u4 breakout board riding on top of the breadboard. It’s doing some pretty heavy math in order to calculate the stepper motor timing. That’s because the mount is like a photo album, hinged at one side and opened on the other by a ball screw. This linear actuation needs to be meshed with the change in angle of the mounting platform, and finally it needs to sync with the movement of the earth. But once a series of images is captured correctly they can be processed into the composite photograph shown above.

If missed that SDR galactic rotation detector from last May you should find it equally compelling.

END_OF_DOCUMENT_TOKEN_TO_BE_REPLACED [Kyle Fredericks] tipped us about his first electronics project, a cheap and smart sleep mask that uses a vibration sensor to detect rapid eye movements.

As some of you may know, REM sleep is the part where you dream the most vividly and actively. If some external stimulation (sound, movement) is sent to you at this moment, it may help you take control of your dream by becoming aware of it. If not, your brain will create dream scenarios that incorporate this stimulus.

The interesting part of the concept is that the vibration sensor calibrates itself at the stage 2 sleep, when no eye movement occurs. This later allows a very accurate detection of the REM sleep stage, triggering a shelf stereo. Secondary buttons are even included in the mask sides.

[Kyle Fredericks] went to great lengths to document every step of the project, making it a perfect first step to learn electronics for beginners out there.