[Bob] and his wife use a bed heating pad. In the winter, they typically turn it on about an hour before bedtime so the bed is nice and warm. The problem is, if they accidentally leave it on, they’ll wake up a few hours later: overheated. What they needed was an advanced timer system.

A normal outlet timer wouldn’t fit his needs: most of the year the pad should shut off after a slight delay, but in the winter they prefer to leave the heating pad on at a much lower temperature. [Bob] decided to create a custom timer with a microcontroller to provide adjustable duration and heating levels.

The circuit is simple. It consists of a microcontroller, a 2-digit LED display, two buttons, and two wires that connect to the heating pad’s original controller. The final build allows you to set the time the pad turns on, turns off, and/or down a few levels. It’s a fantastic hack, and you can see how the interface works in the video following the break.

END_OF_DOCUMENT_TOKEN_TO_BE_REPLACED [styroPyro] liked his Attacknid, but decided it needed just a bit more blue death ray laser. We’ve seen [styroPyro’s] high-powered laser hacks before, but this time he’s taken to hacking one of [Jaimie Mantzel’s] Attacknid robots. According to one of the top comments on [styroPyro’s] video—a comment by Attacknid inventor [Jaimie] himself—the robots were meant to be hacked, and [Jamie] is ecstatic.

[styropyro] removed the disk shooter from his Attacknid and used the fire control circuit to activate a 2 watt blue laser. A low powered, red laser pointer serves as a laser sight, allowing you to aim at your target before unleashing the beefy blue laser. As the video shows, 2 watts is a heck of a lot of power. The Attacknid easily pops balloons and sets fire to flash paper. As usual, we urge you to use caution when handling 2 watt lasers, which fall under Class 4: aka the most dangerous class of lasers. Goggles, skin protection, and safety interlocks are the order of the day. [styroPyro] has been working with high power lasers for a few years, and seems to know what he’s doing. That said, we’ll leave the burning lasers to the professionals.

END_OF_DOCUMENT_TOKEN_TO_BE_REPLACED [Hlesliebole] wanted a finer degree of remote control over his time-lapse shots, so he decided to build an Arduino-driven infrared shutter. He ended up creating this killer Arduino-controlled photography rig that does a whole lot more.

This hack was built for [Hlesliebole]’s Nikon D3100, but he says it should work with any DSLR and remote shutter. This initial build uses an LED as a stand-in for the remote shutter that he ordered.  He intends to update the post once it arrives and he integrates it.

[Hlesliebole] wired a 7-segment display to show the current time delay between photos. This can be set on the fly with a potentiometer, so there’s no need to stop and reprogram the Arduino. And while you’re grabbing a beer and watching the sun slowly sink, the rig can better capture that sunset because of a photoresistor. It detects the ambient light level and minimizes the number of throwaway dark shots.

If that weren’t enough, he’s built servo functionality into the code to support remote control over the camera’s physical position, allowing for panning or rotation over a scene. [Hlesliebole] doesn’t go into detail, but he assures us that there are many tutorials out there.  If you think you’re man enough, you could always work in this outstanding versatile motion dolly hack.

END_OF_DOCUMENT_TOKEN_TO_BE_REPLACED Here’s a project that we sadly let slip through the cracks a couple of years ago. Luckily [Brian] dusted it off and added an Easter Egg to the firmware in order to include it in the Fubarino Contest. The device is a rechargeable battery capacity tester. It discharges NiMH or NiCad batteries through a load resistor at about 1 Watt. [Brian] includes a discussion in his write-up about the hardware’s inability to work with 14500 Li-Ion cells. He includes enough info for you to figure out how to make changes to the circuit if you want to enable this option.

There is a MOSFET for switching each of the three battery positions. The ATmega168 takes readings from the cells once per second. It displays status information on a Nokia 5510 cellphone screen. This is where he chose to inject the Hackaday URL. When a cell’s discharge is complete, the image above scrolls onto the screen and remains there for a short time. See for yourself after the break.

END_OF_DOCUMENT_TOKEN_TO_BE_REPLACED When we think of machine learning it’s usually in the context of robotics—giving an algorithm a large set of input data in order to train it for a certain task like navigation or understanding your handwriting. But it turns out you can also train a nasty virus to go to sleep and never wake up again. That’s exactly what the Immunity Project has been doing. They believe that they have a viable HIV vaccine and are trying to raise about $25 million to begin human testing.

The vaccine hacks the Human Immunodeficiency Virus itself, forcing it to mutate into a dormant form that will not attack its human carrier. It sounds so simple, but a lot of existing knowledge and procedures, as well as new technology, went into getting this far. Last week we spoke with [Reid Rubsamen, M.D.] about the process, which began by collecting blood samples from a wide range of “Controllers“. Controllers are people who carry HIV but manage to suppress the virus’s progression to AIDS. How do you find these people? That’s another story which Scientific American covered (PDF); the short answer is that thanks to the work of [Bruce D. Walker, M.D.] there was already a database of Controllers available.

The information accumulated by [Walker] then underwent a data crunching exercise. The data set was so enormous that a novel approach was adopted. For the laymen this is described as a spam filter: using computers to look at large sets of email to develop a complex process for sifting real messages out of the noise. The task at hand is to look at the genotype of a Controller and compare it with the epitope— a short chain of proteins—in the virus they carry. The power of machine learning managed to whittle down all the data to a list of the  first six epitopes that have the desired dormant-mutation property. The vaccine consists of a cocktail of these epitopes. It does, however, require some clever delivery tactics to reach the parts of the world where it’s most needed. The vaccine must not require refrigeration nor any special skills to administer.

The vaccine’s production uses existing methods to synthesize the amino acid peptides, which are the epitopes themselves. The packaging, however, is a new concept. [Dr. Rubsamen’s] company, Flow Parma, Inc., is using microspheres to encapsulate the vaccine, which render it shelf-stable and allow it to be administered through a nasal spray. Learn more about the technology behind the production of microspheres from this white paper (PDF).

If the vaccine (which will be produced without profit) passes clinical trials, it could see mass distribution as early as 2017.

The $25M we mentioned earlier is a tall hill to climb, but think of the reward if the vaccine is successful. You can donate directly to help reach this goal. If you’re planning on giving gift cards this year, you can purchase them for many different retailers through Gyft, who is donating 100% of December proceeds to the project. 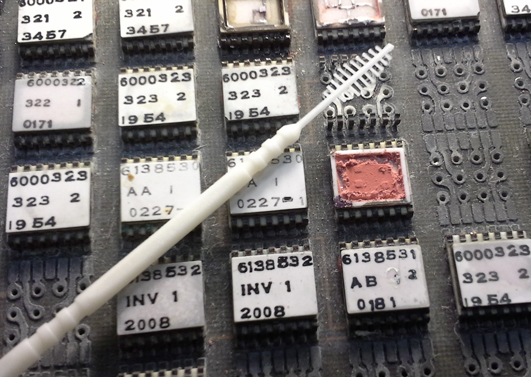 [Fran] has been working on tearing down and reverse engineering the Saturn V Launch Vehicle Digital Computer (LVDC). In her finale, she’s succeeded in depotting the legacy components while keeping them intact.

She accomplished this by carefully removing the silicone compound using a gum brush. This was a laborious process, but it allowed her to see the device’s innards. With this knowledge, she could recreate the logic modules on a breadboard.

[Fran]’s work on the LVDC has been very interesting. It began with a look at the PCB, followed by an x-ray analysis. Next up was a three part series of the teardown. With each part is a detailed video on the progress.

While this is the end of [Fran]’s work on the project, she will be handing off the LVDC hardware to another engineer to continue the analysis. We’re looking forward to seeing what comes out of this continued research.