Depending upon where you live in the world, the chances are that your national or local government, or your utility company, has smart meters on their agenda. The idea is that these network-connected energy meters for your gas and electricity supply will allow greater control of energy usage and lead to lower costs through more efficient use of that energy. Bold plans have been advanced for meters that exert control over your higher-power appliances such as water heaters, washing machines, or home heating systems, able to turn them off or on depending on the time of day, spot price of energy, or load on the grid as a whole.

These devices are not without controversy though. Privacy concerns for example, centred on the amount of information about individuals that could be gleaned from the data they collect. Or security, that a vulnerability in an internet-connected electronic device fitted to millions of homes and with control over high-power appliances could be catastrophic if successfully exploited.

The CitizenWatt system comprises an electricity sensor and a base station. The sensor is a simple battery-powered device that takes the output from a current transformer clamped onto the electricity supply cable and feeds it via an ATMEGA8 microcontroller to a 2.4GHz RF link. The base station is a Raspberry Pi which retrieves the data from the RF, stores it, and allows the user to view it through a web interface. Both the sensor code and hardware files, and the files for the Raspberry Pi base station are freely available on GitHub.

In keeping with the open nature on their project, the CitizenWatt team organised a series of events at which the families who were part of their trial in a Paris suburb were given the chance to build their own sensor boards, for many of them the first time they had handled a soldering iron.

We have seen quite a few smart meters on these pages over the years. There is this one based on a Spark Core, this one based on an ESP8266, and this one provided by a utility company, the data of which can be accessed. CitizenWatt is a worthy project to join them in its own right, but its involvement of a local community of non-makers is what sets it apart. We applad this aspect of the project, and we wish we saw more like it. 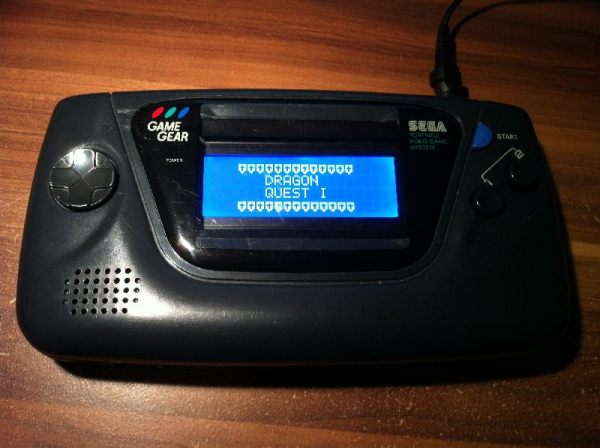 [Nino K] built a portable game player for text adventures. He decided he had spent enough time with the ATmega328 kit from NerdKits to build a more advanced project.

To start with, he built a prototype PCB and tested out the concept. It worked so he began on the real thing. He tore out the guts from a broken Game Gear, saving some parts like those responsible for supplying power. Impressively, he etched his own replacement boards for the Game Gear’s control pads; surprising himself at how simple it ended up being. He fit a 16×4 LCD into the space previously occupied by the Game Gear’s screen.

The program itself is a simple text adventure of his own creation. He even added little 8-bit sprites. The story is classic, a princess has gotten herself in some trouble and a brave hero has been coerced into saving her. Last, he added some music and sound effects from Zelda with a piezo buzzer.

This project is guaranteed to disappoint a visiting younger cousin or relative, but we like to think of that as a feature and not a bug. Great work!

Sure, many of us don’t hold our hair in place with bobby pins, but just in case we need to break into a secure location, like the broom closet we locked ourselves out of, it wouldn’t hurt to know how to use them to pick a lock.

The guide also functions as a very good beginner tutorial on lock-picking, covering the types of simple locks one is likely to encounter, and the various shortcomings of their construction that could impede efforts to open them. The whole site is a good resource for those who enjoy the art.

After that it is standard lock picking. Put torsion on the barrel and prod those pins into place with your reconfigured fashion accessories.

Every year, Congress passes bills directing the funding for various departments and agencies. Sometimes, this goes swimmingly: congress recently told NASA to attempt a landing on Europa, Jupiter’s ice-covered moon. Sometimes, it doesn’t go as well. The draft of the FAA Reauthorization act of 2016 (PDF) includes provisions for drones and model airplanes amid fears of privacy-encroaching quadcopters.

As would be expected, the 2016 FAA Reauthorization act includes a number of provisions for unmanned aerial systems, a class of aircraft that ranges from a Phantom quadcopter to a Predator drone. The draft of the act includes provisions for manufacturers to prevent tampering of modification of their product, and provide the FAA with a statement of compliance, and prohibit these devices from being sold unless these conditions are met.

For a very long time, the Congress and the FAA have had special rules for model aircraft. Since 2012, the special rules for model aircraft have been simple enough: model aircraft are flown for hobby or recreational use, must operate in accordance with community-set safety guidelines, weigh less than 55 pounds, give way to manned aircraft, and not be flown within five miles of an airport. The 2016 FAA Reauthorization bill adds several updates. No model aircraft may be flown higher than 400 feet above ground level, and the operator of a model aircraft must pass a knowledge and safety test administered by the FAA. Under this draft of the FAA Reauthorization bill, you will have to pass a test to fly a quadcopter or model plane.

While this is only a draft of the 2016 FAA Reauthorization bill, there is a considerable risk flying model planes could quickly go the way of amateur radio with a Morse requirement for the license. This, of course, is due to Congress’ fears of the impact drones and model airplanes could have on safety, despite recent studies that show a 2kg drone is likely to cause injury to a human passenger once every 187 million years of operation. In other words, politicians don’t understand statistics. 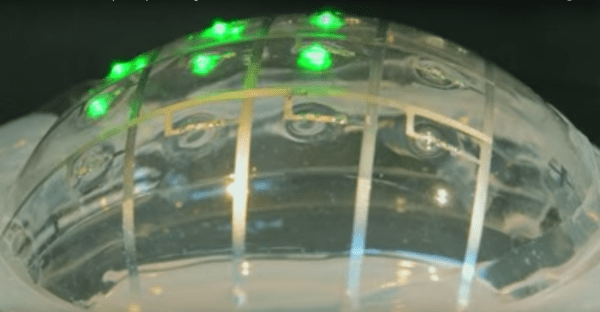 Electronic components are getting smaller and smaller, but the printed circuit boards we usually mount them on haven’t changed much. Stiff glass-epoxy boards can be a limiting factor in designing for environments where flexibility is a requirement, but a new elastic substrate with stretchable conductive traces might be a game changer for wearable and even implantable circuits.

Researchers at the Center for Neuroprosthetics at the École Polytechnique Fédérale de Lausanne are in the business of engineering the interface between electronics and the human nervous system, and so have to overcome the mismatch between the hardware and wetware. To that end, [Prof. Dr. Stéphanie P. Lacour]’s lab has developed a way to apply a liquid metal to polymer substrates, with the resulting traces capable of stretching up to four times in length without cracking or breaking. They describe the metal as a partially liquid and partially solid alloy of gallium, with a gold added to prevent the alloy from beading up on the substrate. The applications are endless – wearable circuits, sensors, implantable electrostimulation, even microactuators.

Looks like progress with flexibles is starting to pick up, what with the conductive silicone and flexible phototransistors we’ve covered recently. We’re excited to see where work like this leads.

END_OF_DOCUMENT_TOKEN_TO_BE_REPLACED

Last time on Embed with Elliot, I began my celebration of the make command’s 40th birthday next month. We discussed using the default rules and how to augment them with your own variables defined in a makefile. Next, I’ll walk you through some makefiles that can be used for real-world microcontroller code development. This week, we’ll focus on one for the AVR platform, and later on, I’ll run through a slightly more complicated version for the ST32M series of ARM Cortex micros.

Along the way, we’ll pick up a couple of tricks, but the aim is to keep the makefiles minimal, readable, and easily extensible. Once you get a little taste of the power of writing your own makefiles, you probably won’t be able to stop adding bells and whistles — custom routines for flashing, checking the size of binaries, generating assembly listings, etc. I’ll leave the extras up to you, but you’ll eventually find that anything you do can be automated with a makefile.

END_OF_DOCUMENT_TOKEN_TO_BE_REPLACED

My “owl-hours” these last few months have been buried in the garage, chopping down aluminum extrusions for a homebrew laser cutter. Nevertheless, it’s time-well-spent. With the skeleton of the gantry now in place, what better way to give it a test-run other than engraving a few sweets?

Yesterday marked this year’s Pi Day, a time to commemorate our commitment to nerdom. I’m no baker; so when a couple friends put me to work on the assembly line of Pi-day pie-making, I couldn’t resist giving one a special touch.

This beloved journey towards building a laser cutter isn’t quite done, but it’s well on its way! Without fumigation, my only exceptions for cutting materials at this stage are paper, and food that smells great after burning it.

Without further ado, I’m honored to serve up a few digits of Pi-on-Pie.

To make the pattern, I generated a DXF vector file with Solidworks, and produced GCode with dxf2gcode. Admittedly, I wholeheartedly believe that this job better lends itself to GCMC, the open source GCode Metacompiler; but, sadly, time was against me. My only true regret: no raspberries in this pipeline.

From Wii-Motes to 3D sintered objects, we’ve seen some bizarre and fantastic objects enter and exit the hood of many laser cutters. If you’ve got a tale behind your build, we’d love to hear about some of your adventures. Join us on the IO and tell us your story as it happens!