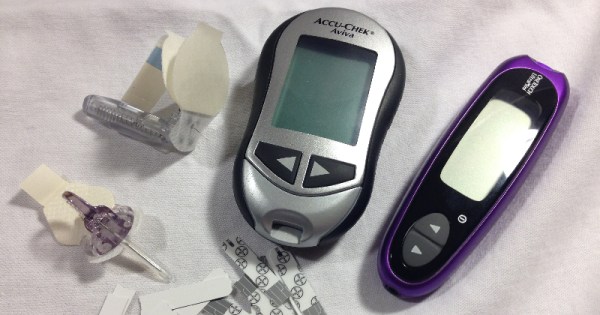 If you need an example of Gillette’s razor blade business plan, don’t look at razors; a five pack of the latest multi-blade, aloe-coated wonder shaver is still only about $20. Look a glucose meters. Glucose meters all do the same thing – test blood glucose levels – but are imminently proprietary, FDA regulated, and subsidized by health insurance. It’s a perfect storm of vendor lock-in that would make King Gillette blush.

For his Hackaday Prize entry, [Tom] is building what was, until now, only a dream. It’s a universal glucometer that uses any test strip. The idea, of course, is to buy the cheapest test strip while giving the one-fingered salute to the companies who release more models of glucometers in a year than Apple does phones.

As with any piece of consumer electronics, there are plenty of application guides published by the biggest semiconductor companies explaining to engineers how to use their part to build a device. After reviewing the literature from TI, Maxim, Freescale, and Microchip, and a few research articles on the same subject, [Tom] has a pretty good idea how to build a glucometer.

The trick now is figuring out how to build an adapter for every make and model of test strip. This is more difficult than it sounds, because some test strips have two contacts, some have three, some have five, and all of them are proprietary. Calibration will be an issue, but if you’re building a glucometer from scratch, that’s not a very big problem.

This is one of the most impressive projects we’ve seen in this year’s Hackaday Prize. No, it shouldn’t be the only way a diabetic tracks their sugar levels, but diabetics shouldn’t rely only on test strips anyway. If you’re looking for a Hackaday Prize project that has the potential to upend an industry, this is the one.

A digital dash is cool and all, but analog gauges have lasting appeal. There’s something about the simplicity of a purely mechanical gauge connected directly to a vehicle’s transmission. Of course that’s not what’s hapenning here. Instead, this build is an analog display for GPS-acquired speed data.

The video below does a good job at explaining the basics of [Grant Stephens]’ build. The display itself is a gutted marine speedometer fitted with the movement from a motorcycle tachometer. The tach was designed to take a 4-volt peak-to-peak square wave input signal, the frequency of which is proportional to engine speed. To display road speed, [Grant] stuffed an ATTiny85 with a GPS module into the gauge and cooked up a script to convert the GPS velocity data into a square wave. There’s obviously some latency, and the gauge doesn’t appear to register low speeds very well, but all in all it seems to match up well to the stock speedo once you convert to metric.

There’s plenty of room for improvement, but we can see other applications where an analog representation of GPS data could be useful. And analog gauges are just plain fun to digitize – like these old meters and gauges used to display web-scraped weather data.

END_OF_DOCUMENT_TOKEN_TO_BE_REPLACED 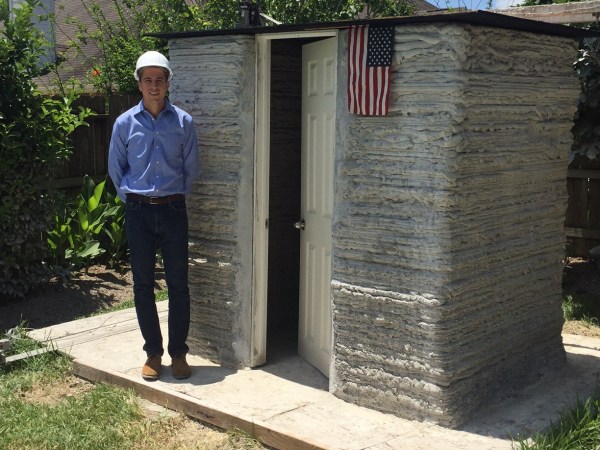 [Alex Le Roux] want to 3D print houses.  Rather than all the trouble we go through now, the contractor would make a foundation, set-up the 3D printer, feed it concrete, and go to lunch.

It’s by no means the first concrete printer we’ve covered, but the progress he’s made is really interesting. It also doesn’t hurt that he’s claimed to make the first livable structure in the United States. We’re not qualified to verify that statement, maybe a reader can help out, but that’s pretty cool!

The printer is a very scaled gantry system. To avoid having an extremely heavy frame, the eventual design assumes that the concrete will be pumped up to the extruder; for now he is just shoveling it into a funnel as the printer needs it. The extruder appears to be auger based, pushing concrete out of a nozzle. The gantry contains the X and Z. It rides on rails pinned to the ground which function as the Y. This is a good solution that will jive well with most of the skills that construction workers already have.

Having a look inside the controls box we can see that it’s a RAMPS board with the step and direction outputs fed into larger stepper drivers, the laptop is even running pronterface. It seems like he is generating his STLs with Sketch-Up.

[Alex] is working on version three of his printer. He’s also looking for people who would like a small house printed. We assume it’s pretty hard to test the printer after you’ve filled your yard with tiny houses. If you’d like one get in touch with him via the email on his page. His next goal is to print a fully up to code house in Michigan. We’ll certainly be following [Alex]’s tumblr to see what kind of progress he makes next! 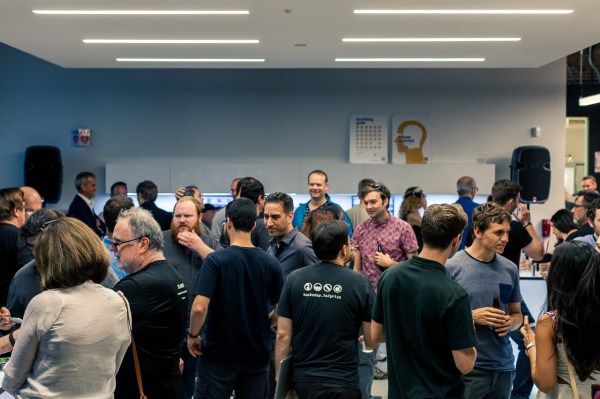 Last week the Supplyframe Design Lab in Pasadena opened it’s doors, welcoming in the community to explore the newly rebuilt interior which is now filled with high-end prototyping and fabrication tools and bristling with work areas to suit any need. I had a chance to pull a few people aside during the opening night party to talk about how the Design Lab came about and what we can expect coming out of the space in the near future.

Opening night was heavily attended. I recognized many faces, but the majority of those exploring the building were new acquaintances for me. This is likely due to a strong connection the Design Lab is building with the students, faculty, and graduates of the ArtCenter College of Design. Located just down the road, it is one of the top design schools in the world.

END_OF_DOCUMENT_TOKEN_TO_BE_REPLACED 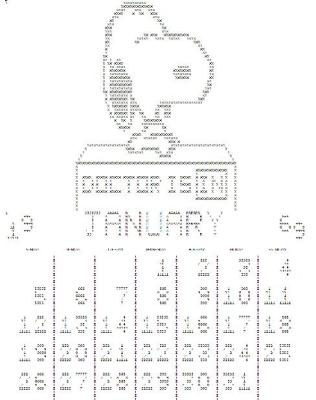 END_OF_DOCUMENT_TOKEN_TO_BE_REPLACED

It’s been a long time since we’ve logged into a UNIX mainframe (other than our laptop) but one of our fond memories is the daily fortune: small, quirky, sometimes cryptic sayings that would pop up on the login screen if your system administrator had any sense of humor.

Apparently, we’re not alone. [Alastair] made his own fortune clock which gives you a new “fortune” every second instead of every login. There’s a catch, of course. It’s a QR clock — the fortune is encoded in a QR code instead of being displayed in human-readable form. You have to take a picture of the tiny OLED screen to know what it says. (Watch it sending him Shakespeare sonnets in the video below.)

You probably know QR codes are good for conveying URLs, but their use as general-purpose text containers is underappreciated in our book, so we’re glad to see this example. Now, we’ve seen QR clocks before (here, and here), and this version does have the disadvantage that you can actually tell what time it is. But we’re grateful for the trip down memory lane.