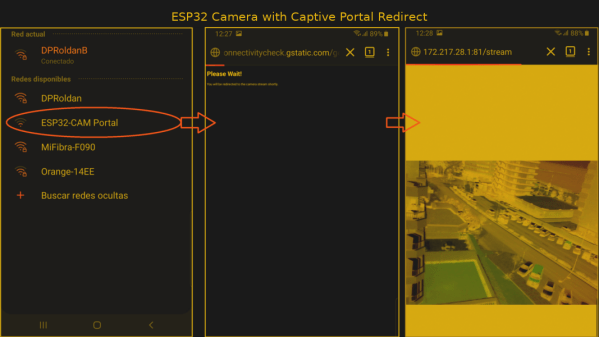 You can never have enough DIY devices at home, so when you look at an ESP32 module that comes with the camera, you automatically start getting ideas. [Daniel Padilla] wanted a way to deploy DIY camera modules without the hassle of configuring them so he made one that looks like an access point and starts streaming as soon as you connect to it.[GitHub]

The code he provides allows the ESP32 to appear as an Open Access Point which you can connect to from a PC or smartphone. The awesome sauce here is that the ESP32 resolves all DNS requests to a redirect in a similar manner to what happens when someone connects to an open Wi-Fi access point in a mall, Instead of a captive portal page that asks the user to authenticate or accept terms and conditions, [Daniel Padilla]’s code instead redirects to the streaming page et voila! Instant camera stream, and it is that simple.

We love this project because it is an elegant way to solve a problem, and it also teaches newbies about captive portals and their implementation. We covered a cheap ESP32 Webcam in the past and this project also comes with code for you to get started. We would love to see what you come up with next.

END_OF_DOCUMENT_TOKEN_TO_BE_REPLACED 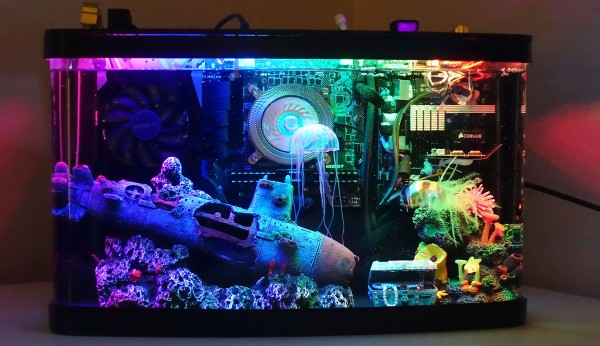 Aquariums are amazingly beautiful displays of vibrant ocean life, or at least they can be. For a lot of people aquariums become frustrating chemistry battle to keep the ecosystem heathly and avoid a scummy cesspool where no fish want to be.

This hack sidesteps that problem, pulling off some of the most beautiful parts of a living aquarium, while keeping your gaming rig running nice and cool. That’s right, this tank is a cold mineral oil dip for a custom PC build.

It’s the second iteration [Frank Zhao] has built, with many improvements along the way. The first aquarium computer was shoe-horned inside of a very tiny aquarium — think the kind for Beta fish. It eventually developed a small crack that spread to a bigger one with a lot of mineral oil to clean up. Yuck. The new machine has a much larger tank and laser cut parts which is a step up from the hand-cut acrylic of the first version. This makes for a very nice top bezel that hangs the PC guts and provides unobtrusive input and output ports for the oil circulation. A radiator unit hidden out of sight cools the oil as it circulates through the system.

These are all nice improvements, but it’s the aesthetic of the tank itself that really make this one special. The first version was so cramped that a couple of sad plastic plants were the only decoration. But now the tank has the whole package, with coral, more realistic plants, a sunken submarine, and of course the treasure chest bubbler. Well done [Frank]! 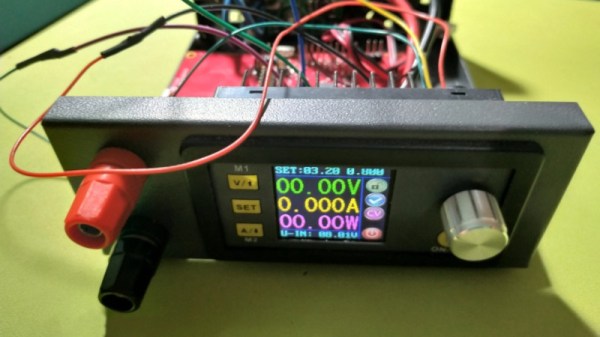 In 2019, it’s possible to kit out a lab with all the essentials at an even cheaper price than it has ever been. The DPS3005 is one such example of low-cost equipment – a variable power supply available for less than $50 with a good set of features. [Markel Robregado] wanted a little more functionality, however, and got down to work.

The crux of [Markel]’s project is improved connectivity. A Texas Instruments CC2640R2F Launchpad is employed to run the show, with its Bluetooth Low Energy capability coming in handy. A custom smartphone app communicates with the Launchpad, which then communicates with the power supply over its Serial Modbus interface. Through the app, [Markel] can set the voltage and current limit on the power supply, as well as switch it on and off. This could prove useful, particularly for remote triggering in the case of working with dangerous projects. Sometimes it pays to take cover, after all.

We’ve seen power supplies modified before; this pot mod for higher precision is a particular treat. If you’ve hacked your bench hardware for better performance, let us know. Video after the break.

END_OF_DOCUMENT_TOKEN_TO_BE_REPLACED

Windows 10 — the operating system people love to hate or hate to love. Even if you’re a Linux die-hard, it is a fair bet that your workplace uses it and that you have friends and family members that need help forcing you to use Windows at least some times. If you prefer a command line — or even just find a place where you have to use the command line, you might find the classic Windows shell a bit anemic. Some of that’s the shell’s fault, but some of it is the Windows console which is — sort of — the terminal program that runs various Windows text-based programs. If you have the creator update channel on Windows 10, though, there have been some recent improvements to the console and the Linux system that will eventually trickle down to the mainstream users.

So what’s new? According to Microsoft, they’ve improved the call interface to make the following things work correctly (along with “many others”):

The changes to the console are mostly surrounding escape sequences, colors, and mouse support. The API changes included things like allowing certain non-administrative users to create symlinks. We’ve made X Windows work with Windows (using a third-party X server) and Microsoft acknowledges that it has been done. However, they still don’t support it officially.

END_OF_DOCUMENT_TOKEN_TO_BE_REPLACED 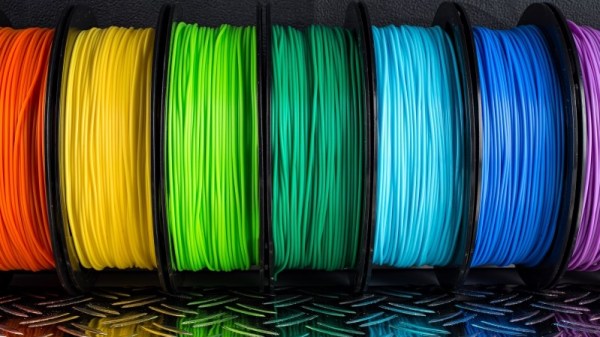 Join us on Wednesday 12 June 2019 at noon Pacific for the Fusion 360 for 3D-Printing Hack Chat with Vladimir Mariano!

There’s no way to overstate the importance of the design and manufacturing tools we now all use on a daily basis. What once took a well-equipped machine shop and years of experience to accomplish can now be designed using free software and built using 3D-printers and a host of other CNC tools, all right on the desktop.

The number of doors this manufacturing revolution has opened are uncountable, and through his popular Desktop Makes YouTube channel and other outlets, Vladimir’s mission is to help people navigate through this world and discover their inner maker. He co-founded the Fairfield County Maker’s Guild in Connecticut and founded the CT Robotics Academy. From 3D-printing and design to electronics and programming, Vladimir teaches it all. He’ll join us for the Hack Chat to discuss the desktop manufacturing revolution in general, plus answer your questions on his main tools, Fusion 360 and 3D-printing.

Our Hack Chats are live community events in the Hackaday.io Hack Chat group messaging. This week we’ll be sitting down on Wednesday June 12 at 12:00 PM Pacific time. If time zones have got you down, we have a handy time zone converter. 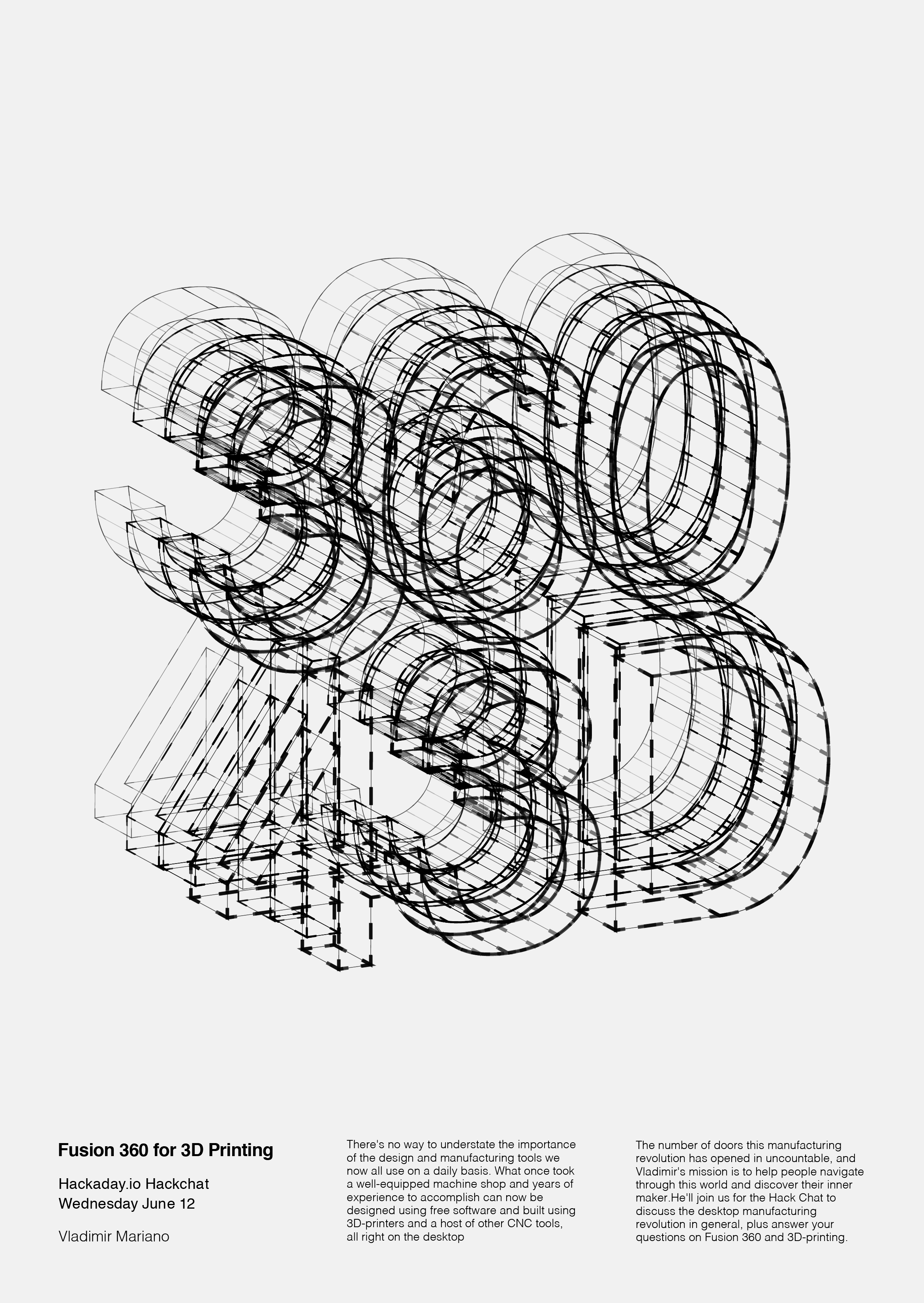 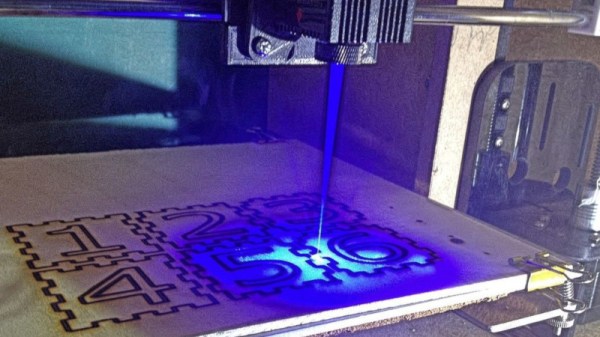 The average FDM 3D printer is not so different from your garden variety laser cutter. They’re often both Cartesian-coordinate based machines, but with different numbers of axes and mounting different tools. As [Gosse Adema] shows, turning a 3D printer into a laser cutter can actually be a remarkably easy job.

The build starts with an Anet A8 3D printer. It’s an affordable model at the lower end of the FDM printer market, making it accessible to a broad range of makers. With the help of some 3D printed brackets, it’s possible to replace the extruder assembly with a laser instead, allowing the device to cut and engrave various materials.

[Gosse] went with a 5500 mW diode laser, which allows for the cutting and engraving of wood, some plastics and even fabrics. Unlike a dedicated laser cutter there are no safety interlocks and no enclosure, so it’s important to wear goggles when the device is operating. Some tinkering with G-Code is required to get things up and running, but it’s a small price to pay to get a laser cutter on your workbench.

We’ve seen [Gosse]’s 3D printer experiments before, with the Anet A8 serving well as a PCB milling machine.