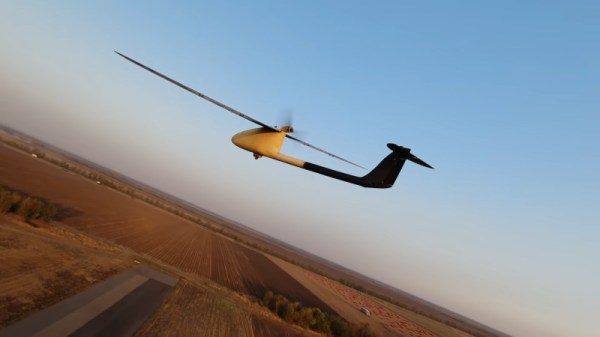 The RC world was changed forever by the development of the lithium-polymer battery. No longer did models have to rely on expensive, complicated combustion engines for good performance. However, batteries still lack the energy density of other fuels, and so flying times can be limited. Aiming to build a drone with impressively long endurance, [Игорь Негода] instead turned to hydrogen power.

With a wingspan of five meters, and similar length, the build is necessarily large in order to carry the hydrogen tank and fuel cell that will eventually propel the plane, which uses a conventional brushless motor for propulsion. Weighing in at 6 kilograms, plenty of wing is needed to carry the heavy components aloft. Capable of putting out a maximum of 200W for many hours at a time, the team plans to use a booster battery to supply extra power for short bursts, such as during takeoff. Thus far, the plane has flown successfully on battery power, with work ongoing to solve handling issues and determine whether the platform can successfully fly on such low power.

We’re eager to see how the project develops, particularly in regards to loiter time. We can imagine having a few pilots on hand may be necessary with such a long flight time planned — other drones of similar design have already surpassed the 60-minute mark. Video after the break.

END_OF_DOCUMENT_TOKEN_TO_BE_REPLACED 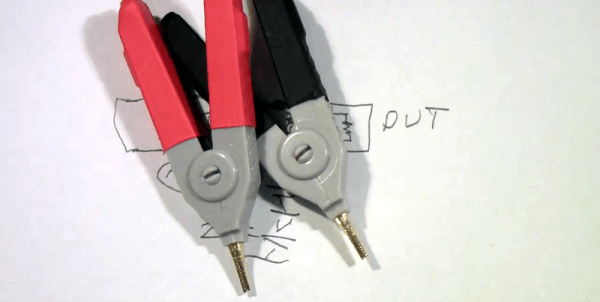 You might think the probes in the picture are just funny looking alligator clips. But if you watch [tomtektest’s] recent video, you’ll learn they are really Kelvin probes. Kelvin probes are a special type of probe for making accurate resistance measurements using four wires and, in fact, the probe’s jaws are electrically isolated from each other.

We liked [Tom’s] advice from his old instructor: you aren’t really ever measuring a resistance. You are measuring a voltage and a current. With a four-wire measurement, one pair of wires carries current to the device under test and the other pair of wires measure the voltage drop.

END_OF_DOCUMENT_TOKEN_TO_BE_REPLACED 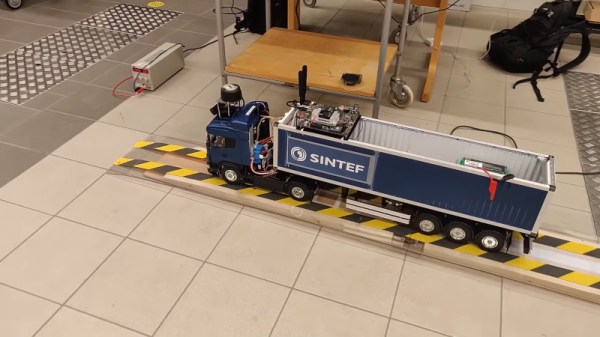 RC cars are a fun pastime, but for many hackers, taking things to the next level involves making the cars drive themselves. For his Masters thesis, [Jon] did just that, building a self-driving robot truck that confidently cruises the floor of his laboratory.

The truck is based on a 1/14th scale Tamiya chassis, and had been fitted out by a prior group with an inductive charging system. On top of this platform, [Jon] added a Jetson TX2 to act as the brains of the system, hooking it up with a Slamtec RPLIDAR scanner to map its surrounding environment. There’s also a Teensy microcontroller onboard which handles synthesizing PWM signals for the radio control hardware that drives the truck, and a Logitech webcam up front for machine vision. The truck is capable of operating in a variety of modes, from full manual operation, to driving based on LIDAR mapping or with an AI controlling the truck based on camera data. The truck is programmed to drive a route including an inductive charging pad so it can keep its power levels up without human intervention.

It’s a great blueprint for a self-driving system, and [Jon]’s thesis goes into great detail on how everything works at the base level (available on this page as a 67 MB PDF). His Code is on Github for the curious. We’ve seen similar projects before too, like this robot that navigates its builder’s house using LIDAR. Video after the break.

END_OF_DOCUMENT_TOKEN_TO_BE_REPLACED 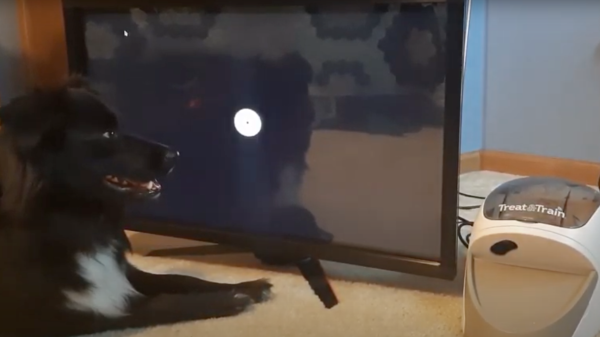 An open-source canine training research tool was just been released by [Walker Arce] and [Jeffrey Stevens] at the University of Nebraska — Lincoln’s Canine Cognition and Human Interaction Lab (C-CHIL).

We didn’t realize that dog training research techniques were so high-tech. Operant conditioning, as opposed to Pavlovian, gives a positive reward, in this case dog treats, to reinforce a desired behavior. Traditionally operant conditioning involved dispensing the treat manually and some devices do exist using wireless remote controls, but they are still manually operated and can give inconsistent results (too many or too few treats). There weren’t any existing methods available to automate this process, so this team decided to rectify the situation.

They took a commercial treat dispenser and retro-fitted it with an interface board that taps into the dispenser’s IR sensors to detect that the hopper is moving and treats were actually dispensed. The interface board connects to a Raspberry Pi which serves as a full-featured platform to run the tests. In this demonstration it connects to an HDMI monitor, detecting touches from the dog’s nose to correlate with events onscreen. Future researchers won’t have to reinvent the wheel, just redesign the test itself, because [Walker] and [Jeffrey] have released all the firmware and hardware as open-source on the lab’s GitHub repository.

In the short video clip below, watch the dog as he gets a treat when he taps the white dot with his snout. If you look closely, at one point the dog briefly moves the mouse pointer as well. We predict by next year the C-CHIL researchers will have this fellow drawing pictures and playing checkers.

END_OF_DOCUMENT_TOKEN_TO_BE_REPLACED 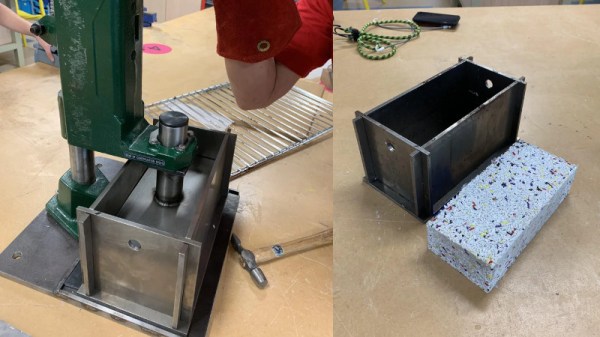 Many plastics are, in theory at least, highly recyclable. Unfortunately, in reality, most plastic ends up as waste instead, harming the environment and providing no ongoing value to society. Wanting to investigate possible ways to repurpose this material, [Rehaan33] built a rig to create bricks out of waste plastic for a school project.

The aim of the project is to take waste plastic, in this case high-impact polystyrene, and reform it into a brick that could be used as a low-cost building material. The material is shredded, before being packed into a steel mould and heated to 270 degrees in an oven. As polystyrene is a thermoplastic, it can readily be heated in this way for reforming without harming the material’s properties. Once heated, the mould is placed into the press rig, which uses parts of an old drill press to force down a steel plate, helping shape the final form of the brick.

While you’re unlikely to see old soda bottles used to build a skyscraper in New York any time soon, such techniques could be a good way to help eliminate plastic waste in impoverished areas and stem the flow of plastic into the world’s oceans. The project served as a useful learning experience, allowing [Rehaan33] to pick up skills in metalworking, machine design, and working with thermoplastics. Recycling plastics is a key area of interest for many, particularly in the 3D printing space, with many exploring ways to reuse thermoplastics in more efficient ways. If you’ve got your own project turning waste plastics into useful material, be sure to let us know! 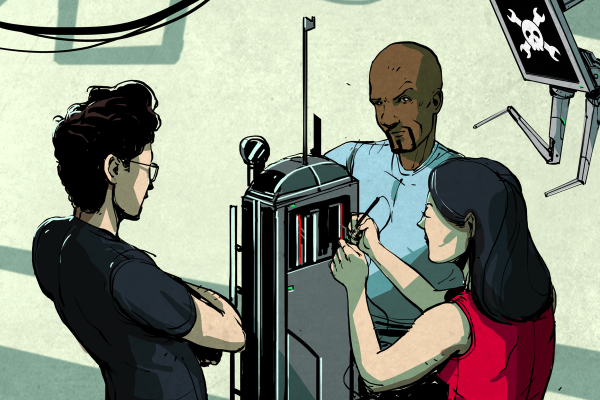 I did something silly. I bought a lot of ten “broken” cheesy indoor quadcopters on eBay — to hopefully cobble one working one together and to amuse my son. At this point, I’ve got eight working. The bad news is that they all come with dirt-cheap transmitters that aren’t really conducive to flying at all. They’d be a lot more fun if they could be controlled with a real remote. Enter the hackers.

Most all of the cheap quads are based on one of a handful of radio chipsets, although they use different protocols. An enterprising hacker could conceivably just bundle together this handful of radio modules, and the rest would be a simple matter of software. That’s exactly what Pascal Langer’s DIY Multiprotocol TX and supporting firmware does. This hobby project was so successful that compatible hardware is manufactured by more than a few Chinese companies, and non-geeks have them installed in their radios. The module lets you control virtually anything that uses 2.4 GHz. Of course, I’ve got one of them. 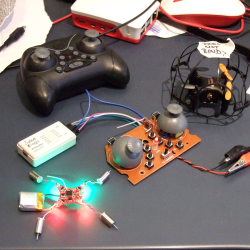 I opened up the cheesy drone’s transmitter, found that it used a popular chipset, and worked through all the different supported protocols that used it. No dice. But the radio module did have nicely labeled SPI lines, so I reached out to Pascal. A couple of Sigrok sessions later, he’d figured out that it was trying to bind on a different channel, I’d recompiled the firmware, and was playing with the drone’s other functions.

I just love a good SPI-sniffing session. sigrok-cli -d fx2lafw -c samplerate=4000000 -P spi:clk=D0:mosi=D1:cs=D2 -A spi="mosi transfer" --continuous | grep A0 | uniq reads the SPI lines, decodes the packets, filters out the commands, and removes duplicates, in real-time. All that’s left to do is wiggle the sticks, mash buttons, and take good notes.

None of this was hard, and certainly none of it was expensive. I got my drones under the control of my fancy-schmancy remote, and have a good foothold into controlling them algorithmically later on thanks to everyone’s previous work on reverse engineering these protocols. Support for DF Drone’s SkyTumbler will be included in the next DIY Multiprotocol TX release, and I spent about four or five pleasant hours on this project. Maybe only a handful of people will stumble on this particular protocol — or maybe it will just be me. I did it mostly just to scratch my own particular itch.

But that’s one way open source works, thrives, and grows. Here’s to you all out there, from the Deviation team, who did a lot of the early drone protocol reverse engineering, to Pascal for the DIY Module, to the Sigrok folks who made the tools accessible for me to piggyback on everyone’s previous work. Keep on hacking! 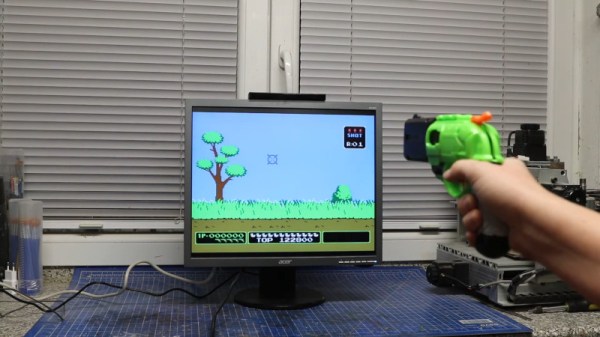