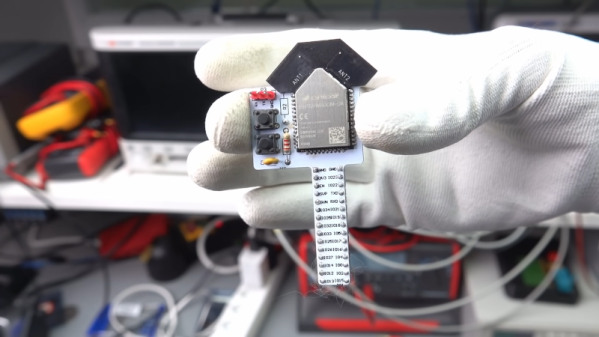 We’ve looked at the WROOM-DA module before. It’s an ESP32 with two antennas, and [Andreas Spiess] says it is the ugliest ESP32 he’s ever seen. But beauty is only skin deep, after all. Did [Andreas] find beauty in the twin antennas? Watch the video below and see for yourself.

According to the block diagram, the twin antennas are not used simultaneously but offer diversity one at a time. There is also 8 MB of flash, double the amount on traditional WROOM modules. Mounting the device was a bit difficult since most ESP32 carrier boards will block some portion of the antenna array.

END_OF_DOCUMENT_TOKEN_TO_BE_REPLACED

It seems like large-screen cheap meters are really catching on. [TheHWcave] does a very detailed review of a KAIWEETS KM601, which is exactly the same as a few dozen other Chinese brands you can get from the usual sources. You can see the review in the video below.

If we learned nothing else from this video, we did learn that you can identify unmarked fuses with a scale. The fuses inside were not marked, so he wanted to know if they appeared to be the right values. We would have been tempted to just blow them under controlled conditions, but we get he didn’t want to destroy the stock fuses until after testing.

END_OF_DOCUMENT_TOKEN_TO_BE_REPLACED 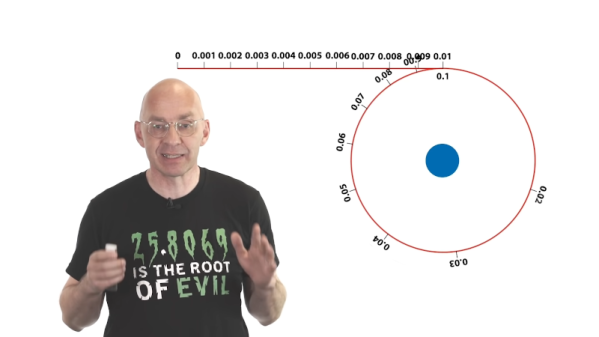 Around here we mostly enjoy slide rules. We even have our own collections including some cylindrical and circular ones. But [Mathologer] discusses a recent Reddit post that explains a circular slide rule-like device using a wheel and a stretchable rubber band. While it probably would be difficult to build the actual device using a rubber band, it can do wonders for your understanding of logarithms which still show up in our lives when, for example, you are calculating decibels. [Dimitri] did simulate the rubber band for you in software.

The idea is that a perfect rubber band has numbers from 0 to 10 evenly marked on it. As you rotate a wheel attached at the 10 mark, the rubber band stretches more and more. So the 10 and the 9 have relatively little space between them, but the 1 and the 2 are much further apart. The wheel’s circumference is set so that the 1 will exactly overlay the 10. What this means is that each spot on the wheel can represent any number that differs only by a decimal point. So you could have 3 mean 0.03, 300, or — of course — 3. Of course, you don’t need to build the wheel with a rubber band — you could just mark the wheel like a regular circular slide rule.

END_OF_DOCUMENT_TOKEN_TO_BE_REPLACED 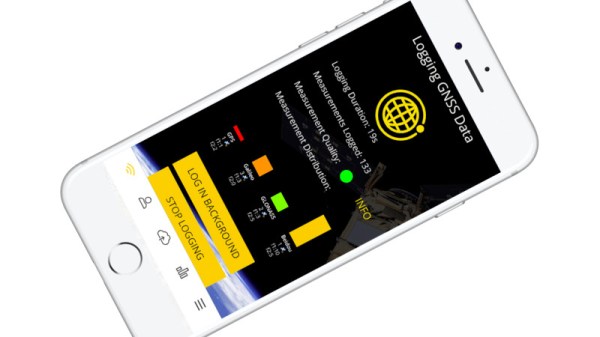 Above our heads, the atmosphere is a complex and unpredictable soup of gasses and charged particles subject to the influence of whatever the Sun throws at it. Attempting to understand it is not for the faint-hearted, so it has for centuries been the object of considerable research. A new project from the European Space Agency and ETH Zurich gives the general public the chance to participate in that research in a small way, by crowdsourcing atmospheric data gathering to a mobile phone app. How might a mobile phone observe the atmosphere? The answer lies in their global positioning receivers, which can track minute differences in the received signals caused by atmospheric conditions. By gathering as much of this data as possible, the ESA scientists will gain valuable insights into atmospheric conditions as they change across the globe.

The app requires an Android phone equipped with a dual frequency satnav receiver, and having been duly installed on the trusty Hackaday Motorola it in turn started picking up all the different constellations of satellites. The instructions are to leave it somewhere such as a windowsill with an unobstructed view of the sky and move it as little as possible, to which we’d add clicking the “Log in background” button and connectign a charger. There’s a promise that uploaders can win prizes, so aside from contributing to scientific discovery there might be an unexpected benefit. More details on the app can be found here, meanwhile many readers will know that this isn’t the only crowdsourced atmospheric data gathering effort. 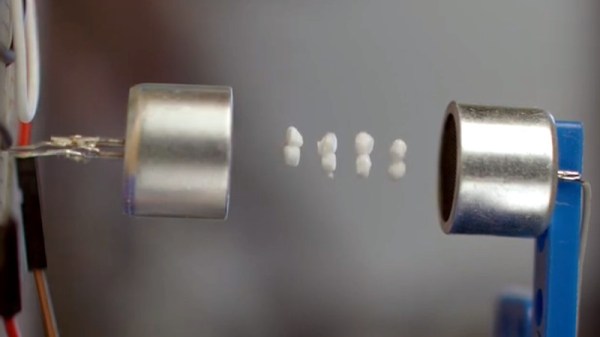 Ultrasonic levitation — the practice of creating a standing wave between two ultrasonic sources and positioning lightweight objects such that they can float in the pressure minimums between them — has been a source of fascination to more than one experimenter. [Peter Lin] demonstrated this in the video below the break, by creating an ultrasonic levitation system using only the trusted chip of all true experimenters, the NE555. (Video, embedded below.)

The circuit is simplicity itself, just an astable of the type that has made a billion beepers and flashing LEDs. It drives two ultrasonic transducers in parallel, and with them pointing towards each other and a bit of gap adjustment work it can successfully levitate pieces of polystyrene. There was some work in adjusting the frequency to the transducer resonance, but that’s not a huge challenge given the right instrumentation. We can see that it would make a great demonstration of standing waves, and also a fantastic desk toy for not a lot.

We celebrate everyone’s favourite timer chip here at Hackaday, so much so that we recently ran a contest to find the best creations using it.

END_OF_DOCUMENT_TOKEN_TO_BE_REPLACED 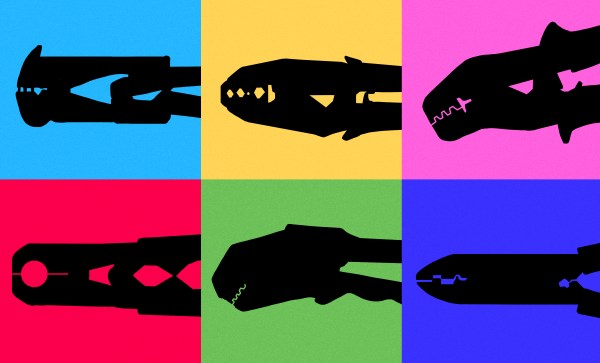 Hi, my name is Dan and I’m a crimpoholic.

Honestly, I didn’t know I was a serial abuser of crimping tools until this weekend. I’ve been working on a small solar power system, and on Saturday I found myself struggling to get the BMS installed on the battery. I bought a Bluetooth dongle to connect the BMS to a smartphone app for checking the individual cells of the battery. I assumed it would just plug right into the UART port on the BMS, but alas — different connectors. So off I went to my bench, looking for a sensible way to make the connection.

My first thought was to simply log the connector off the dongle and solder the leads to the traces on the PCB right below the UART port. But then I saw that the pins in the port looked like 0.1″ pitch, so I rummaged through my stash to see what I could find. To my surprise, I had not only a kit of 0.1″ female crimps and housings, but I also had the crimping tool for them! I had no memory of making the purchase, but I thanked my lucky stars that I did, and got on with the job.

END_OF_DOCUMENT_TOKEN_TO_BE_REPLACED 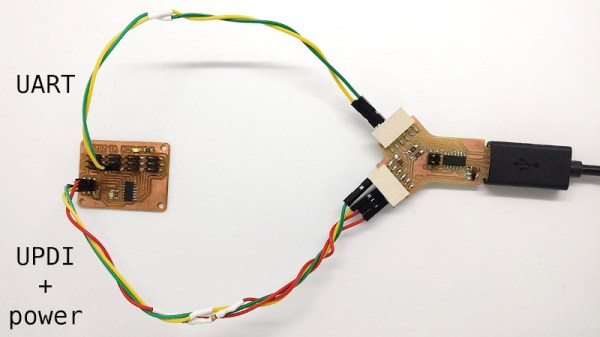 While the average computer user likely hasn’t given much thought to the lowly serial port in decades, the same can’t be said for the hardware hacker. Cheap serial-to-USB adapters are invaluable for snooping debug ports or programming chips, and if you ask us, you can never have too many laying around the bench. [Quentin Bolsée] loves them so much that he’s even figured out how to build a dual-port adapter with a SAMD11C14 microcontroller. 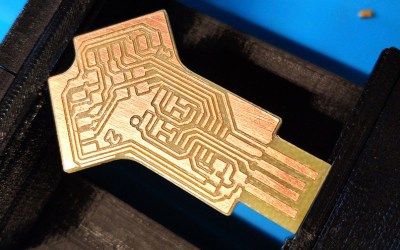 As [Quentin] explains in the write-up, this isn’t just some kind of Y-cable. When connected to the host computer, the adapter shows up as two distinct serial ports, each with independent settings for things like baud rate and parity. This handy little gadget will let you tap into the serial ports of two devices simultaneously if you’re looking to do some Hollywood-style hacking, but more practically, it allows you to establish a debug and programming interface to the same board using just one USB connection.

[Quentin] milled a custom PCB for his adapter, which we have to say looks phenomenal, but those with more limited equipment at home should be able to send the MIT licensed board files off for production. He’s also provided the source code for the SAMD11C14’s firmware, so you’ve got everything you need to spin up your own version of this neat tool.

Two ports not enough for your parallel hacking needs? Believe it or not, we’ve also seen a quad USB-to-serial adapter that you can put together, though it’s a considerably more complex circuit.