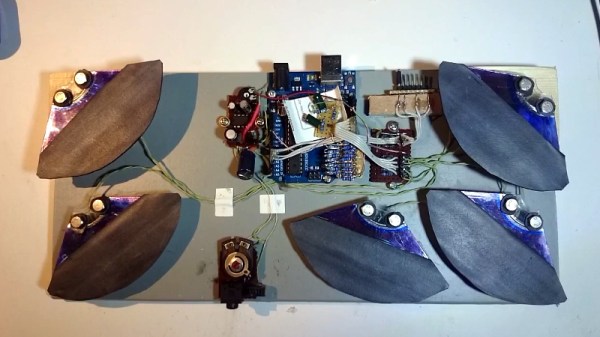 When looking through existing Arduino drum kit projects, [joekutz] noticed that most of them just used the microcontroller as an input for an existing MIDI device. That’s fine if you’re just looking to build your own hardware interface, but he wondered if it would be possible to forgo the MIDI device completely and actually generate the audio internally. 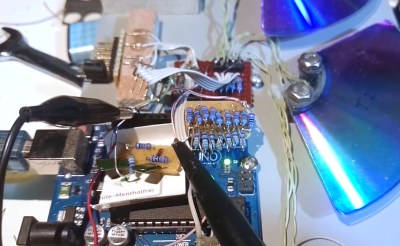 To be sure, this is a lot to ask of an 8-bit microcontroller, which is probably why nobody does it this way. But [joekutz] wasn’t giving up without a fight. One of the trickiest aspects was storing the samples: the 8-bit, 11.025 KHz mono WAV files ultimately had to be converted into C data arrays with a custom Python script.

Unfortunately, since the samples are essentially part of the drum’s source code, he says distributing the firmware is something of a problem. Though it sounds as though there might be a solution to this soon for those who want to play along at home.

But don’t get the impression that this project is just software. Check out the custom impact sensors lovingly crafted from popsicle sticks and metal cut from soda cans, which have been mated with sections cut out of old DVD-Rs. Actually getting the beats out of the Arduino required the addition of a R2R DAC circuit and a TDA2822 amplifier. In the video after the break, you can hear the results for yourself.

[joekutz] is no stranger to homebrew electronic instruments. When we last heard from him, he was turning a very pink keyboard into his own personal circuit bending playground.

END_OF_DOCUMENT_TOKEN_TO_BE_REPLACED

The concept behind DIY electronic drum kits is fairly simple — small piezoelectric elements are used to generate a voltage when the drumpads are struck. That’s easy enough, but the mechanical design can be a difficult problem to approach. To solve that, [ryo.kosaka.10] decided to design an E-drum pad made with paper & 3D printed parts.

As far as E-drum triggers go, it follows the basic rules — a piezo element used as a trigger with some foam used for damping. For the striking surface, a Tama-brand mesh drum head is used. Being an off-the-shelf drum head, it has a good feel and playability. But the shell is where the creativity really shines through. While the top and bottom parts are 3D printed in the usual way, the main shell of the drum is made with several layers of thick paper laminated together with glue. This creates a surprisingly strong, sturdy shell and is also much faster and less wasteful than waiting for a similar part to 3D print.

To round out the guide, instructions are given on how to wire the piezo triggers up for either a regular E-drum sound module or an Arduino. It’s a nice touch, as those inexperienced with E-drums may not be entirely familiar with how they work – this way, anyone can give the project a try.

Keen for something bigger? Back in 2014 we saw this awesome 5-piece e-drum kit built out of buckets.

Anyone into audio recording knows that recording drums is a serious pain. Mic setup and positioning can make or break a recording session. One particular hurdle is getting a great sound out of the bass drum. To overcome this, [Mike] has built a microphone using an 8″ woofer in an attempt to capture the low-end frequencies of his bass drum. Using a speaker as a microphone isn’t a new idea and these large diaphragm bass drum mics have taken commercial form as the DW Moon Mic and the now-discontinued Yamaha SubKick.

The project is actually quite simple. The speaker’s positive terminal is connected to Pin 2 of a 3-pin XLR microphone connector. The speaker’s negative terminal is connected to the connector’s Pin 1. [Mike] made a bracket to connect the woofer to a mic stand, which in turn was cut down to position the woofer at bass drum height. The setup is then plugged into a mixer or pre-amp just like any other regular microphone.

[Mike] has since made some changes to his mic configuration. It was putting out way too hot of a signal to the preamp so he added an attenuation circuit between the speaker and XLR connector. Next, he came across an old 10″ tom shell and decided to transplant his speaker-microphone from the open-air metal rack to the aesthetically pleasing drum shell. Check out [Mike’s] project page for some before and after audio samples. 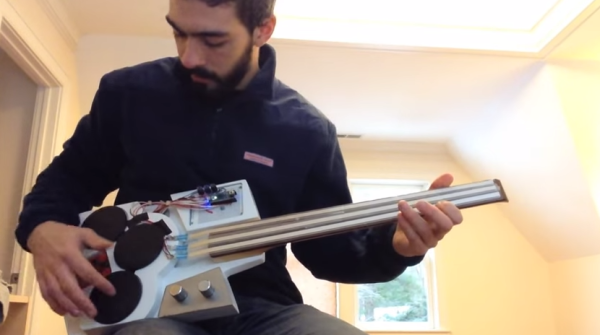 END_OF_DOCUMENT_TOKEN_TO_BE_REPLACED

If you’re going to be the drummer in a band for a Back to the Future themed New Years Eve party, you really need to add something to your gig that captures that kitschy futuristic ambiance as seen by the 80s. Rainbow LEDs will do the trick.

For his drum set’s reactive trailing light display, [Alec Smecher] was inspired by a similar project he’d seen in the past where Neopixels were added to a regular drum kit and activated with several individual microphones. Since the microphones ultimately heard all of the thundering noise from every drum and cymbal at once, there was a lot of bleed over in the response of the LEDs. To remedy this, [Alec] used piezo pickups which listen to discrete surface vibrations rather than sound in order to clean up the effect produced by the lights. Each of the five LED strips lining the stands of his cymbal and inside of his drums were programmed to react with a burst of light equal in brightness to the intensity of the vibration sensed by the piezo.

To insure everything kept together amidst all the constant motion and shaking during performance, [Alec] soldered his connections directly onto his Trinket’s pins as well as the fragile pickup of the piezo. The pickup of the sensors were taped directly against the skin of his drums and along the inside of each cymbal to maximize responsiveness. After ringing in the new year appropriately as the ‘band from the future’, [Alec] reports that his colorful addition worked fantastic the whole night.

Those interested in building their own can find a nice schematic on [Alec’s] blog as well as the code he used on github. Difficulty level taken into account, this is a great first project for a musician who has yet to dabble in electronics… and seeing that it’s a brand new year, there’s no better time to have a go at something new.

END_OF_DOCUMENT_TOKEN_TO_BE_REPLACED

Embedded above is [egyokeo]’s solution for using MIDI drums with Guitar Hero. He’s playing a DrumKAT MIDI kit. It connects to a PC running his MIDI Hero software, which handles timing and multinote combinations. The PC uses a USB ToolStick microcontroller to send commands to the console using an FPS adapter or soldered into the instrument. It’s a fairly good solution if you’re building a generic controller and need to modify the signaling.

When Rock Band was first released, modders sought to adapt their MIDI drum kits for use with the game. The easiest solution they found was Highly Liquid’s MSA-P. It’s a photorelay based MIDI decoder. You need to solder directly to the brain in the Rock Band drums. If you’re planning on modding any instrument, check the compatibility matrix first. Hopefully you’ll end up with something that can be used across multiple games.