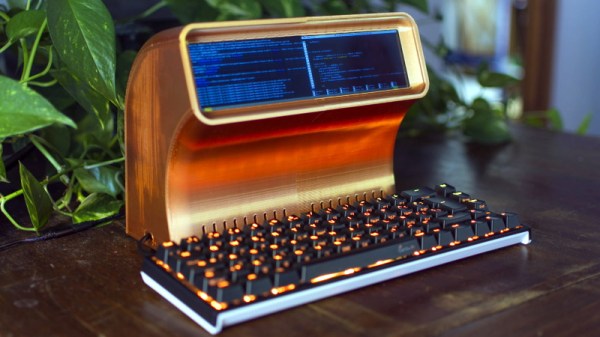 It wasn’t so long ago that a desktop computer was just a beige box with another, heavier, beige box sitting next to it or maybe perched on top. They’re a bit more visually exciting these days, with even mass produced PCs now shipping with RGB lighting and clear side panels. But even so, few could really look at a modern desktop computer and call it objectively beautiful.

But [Oriol Ferrer Mesià] wonders if we couldn’t improve on things a bit. Over the last few months, he’s been experimenting with small 3D printed enclosures that reimagine the traditional desktop computer aesthetic. With their distinctively retro-futuristic style, they look like the kind of gadgets science magazines in the 1960s thought would be dotting kitchens, living rooms, and space stations by the year 2000. But unlike those fanciful creations, each one of these beauties is a fully functional computer. 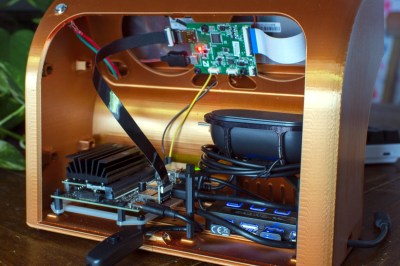 A few of the designs are relatively conservative, and not entirely unlike some of the old “dumb terminals” of the 1970s. With a Raspberry Pi 4 and a tablet-sized screen, these diminutive terminals would be perfectly usable for light desktop work or some retro gaming.

But we particularly like the ultra-widescreen design that [Oriol] has come up with. With a fairly unusual 4:1 aspect ratio LCD, the printed enclosure for this one was so large that it had to be done in two pieces on his Ender 3. To keep the 8″ 1920 x 480 panel well fed, this design uses a Jetson Nano 2GB which has considerably more graphical punch than other Linux SBCs of similar size and price.

As part of the recent cyberdeck craze, we’ve seen plenty of people recreating the look and feel of vintage portable computers with 3D printed cases and modern components. Desktop creations have been far less common, but with gorgeous designs like these to serve as inspiration, that may change. 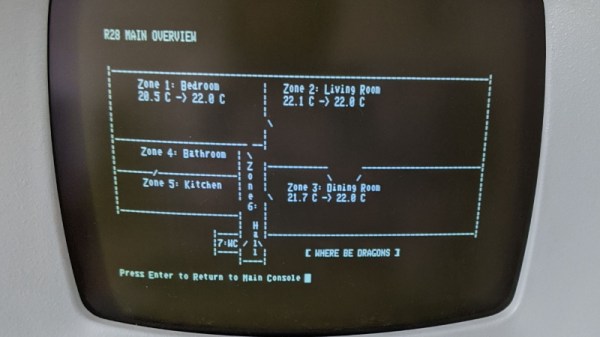 Most smart home products are designed to be controlled from a mobile device, which makes sense since that’s what the average consumer spends most of their day poking around on these days. But you aren’t the average consumer, are you? If you’re looking for a somewhat more tactile experience, then why not put your smart home dashboard on a vintage serial terminal as [Daniel Karpantschof] did?

So how do you get the latest and greatest in home automation talking to a serial terminal built before the Internet as we know it? With Python, of course. [Daniel] has some code running on a Linux server that’s actually taking to his various smart home gadgets, which then spits out a simple ASCII user interface that his circa 1976 ADM-3A terminal can handle; complete with a floor plan view of the house that shows the temperature in different rooms.

Naturally, that’s only half the battle. You still need to get that interface onto the terminal. For that, [Daniel] is using the “Simulant Retro WiFi Modem” that we’ve covered in the past. An ESP8266 connects to the network and shuffles data over to the target device over serial. It’s all transparent to the terminal itself, so this project could be reproduced with whatever vintage machine holds a special place in your heart.

Back in the old days, the cool kids didn’t have an Apple II or a Trash-80. The cool kids had jobs, and those jobs had Vaxxen all over the place. The usual way of working with a Vax would have been a terminal, a VT220 at least, or in the case of [Sudos]’ experiments with a Raspberry Pi, A DEC VT510, a single session, text only serial terminal.

Usually, when we see a ‘new hardware stuffed into old tech’ project like this, the idea is simply to find a use for the old hardware. That makes sense; a dumb terminal from the late 90s should be a bit rarer than a Raspberry Pi Zero. This is not the case for [Sudos]’s build. He recently came across a few Raspberry Pi Zeros at Microcenter, and looking for a use for them, he decided to turn a serial terminal into a Real Unix System™.

As you would expect from a serial terminal, connecting a Raspberry Pi and putting some awesome character graphics on the screen is as simple as a Max3232 board picked up from eBay, a WiFi dongle, and an Ethernet adapter. Connect the Pi to the terminal with a serial adapter cable, and you’re off to the races.

While the VT510 serial terminal is just about the end of the line as far as dedicated terminals go, there are classier options. The VT100 terminal, older than most of the Hackaday readership, features a port on its gigantic board, meant to connect to whatever weirdness was coming out of Maynard in the late 70s. You can attach a BeagleBone to this connector, making for a very slick stealth mod.

If you paid a visit to France in the 1980s the chances are you’d have been surprised to see a little brown screen and keyboard sitting next to the telephones wherever you went. At the time, it was another reason apart from the food, wine, and super-fast trains to envy our Gallic cousins. This was Minitel, their take on the cutting-edge of online data services of the day.

Minitel stood apart from similar services of the day in most other countries, because of its business model. Unlike the UK’s Prestel or West Germany’s BTX for which you had to spend significant money on a terminal, the French Minitel terminals were free. Thus in the early 1980s everybody in France was busy using videotext while most of the rest of Europe was still excited by chipping bits of flint into arrow heads. Or at least, that’s how it seemed at the time to those of us who didn’t have Minitel.

The Minitel service was finally shuttered in 2012, but the terminals can still be found. [Tony Pigram] bought one, an Alcatel Minitel 1, and made it into something useful by turning it into a USB serial terminal for his Raspberry Pi. Surprisingly the physical interface between the Minitel and the USB port is a relatively simple level shifter, but the configuration of both the Minitel and the Pi was anything but.

The problem was that Minitel terminals were meant to work with Minitel, and [Tony]’s difficulties were increased by his machine being an earlier model without the handy function key to access settings found on later terminals. A lot of research paid dividends though, and he now has what must be one of the most compact and stylish CRT serial terminals available. We can’t help noticing it has a QWERTY keyboard and English menus, it would be interesting to know which non-French market it was made for.

We’ve featured an RS-232 integration into a Minitel terminal before here at Hackaday, but if you are really interested in Gallic retro-tech take a look at our discussion of their 8-bit scene.

A common sight in the days before cheap PCs conquered the world was the dumb terminal. A keyboard and a monitor with a serial port on the back that was usually hooked up to a minicomputer or even a mainframe, these were simple devices. Anything that came into the serial port was rendered on the screen, anything typed on the keyboard was sent out through the serial port. They didn’t need to contain a microprocessor. If you are old enough, you may remember electronics magazines of the 1970s and early 1980s publishing terminal designs based entirely on 74 series logic.

The serial terminal might seem like a redundant historical footnote when viewed from 2016, but they can still find a use among those working with systems such as small embedded microcontrollers that only possess a serial port. To address this application, Hackaday.io user [K.C.Lee] has created a low-cost terminal module for a VGA monitor and a PS/2 keyboard based around an inexpensive STM32F030F4 processor.

END_OF_DOCUMENT_TOKEN_TO_BE_REPLACED [Andrew Curtin] tipped us off to another excellent resurrected vintage one piece ADM-3A dumb terminal. [Andrew] not only resurrected this sexy machine by breathing life into her once more after 37 years but he also got it connected online to retro.hackaday.com for those coveted retro Super Nerd bonus points.

As with other ADM-3A terminals we have seen on Hackaday, the terminal screen can be interfaced over an RS-232 serial connector to a laptop, however, [Andrew] didn’t have a laptop to sacrifice so he utilized the now popular laptop stand-in RasPi. It’s a clever form factor solution which makes it appear more like a standalone computer for the first time in its life.

To make the hack work he needed a serial adapter to link the ADM-3A terminal to the Ras-PI so he constructed one for himself. It’s another clever solution but he didn’t share much information on this build. Maybe he’ll comment below or elaborate on his site with more details on the construction and utilization of the adapter board from the Ras-PI so others could easily repeat this fun hack.

For a long time now, [Morgan] has been wanting an old serial terminal. In a stroke of luck, one of his pals at the Quelab hackerspace scored an awesome ADM-3A terminal from a collector. It’s a historically significant piece of computing and UNIX history, so obviously [Morgan] needed to get it working.

The ADM-3A terminal pre-dates the famous DEC VT-100 terminal, but since [Morgan]’s new acquisition speaks RS-232, he had a good shot at getting it to work with one of his more modern boxes. He’s using a Windows laptop loaded up with FreeBSD in a VM to talk to the terminal. Surprisingly, the only additional hardware required was a USB to serial cable and a DE9-DB25 serial adapter.

It may not be as cool (or as loud) as Quelab’s Teletype ASR-35 they have set up for Zork sessions, but it’s great to see ancient hardware have some
use. Right now, [Morgan] is editing files with vi and of course playing Zork. Seems like there’s plenty of life left in this old dumb terminal. After looking for an old VT-100 for a while now, I’ve got to say I’m pretty jealous.