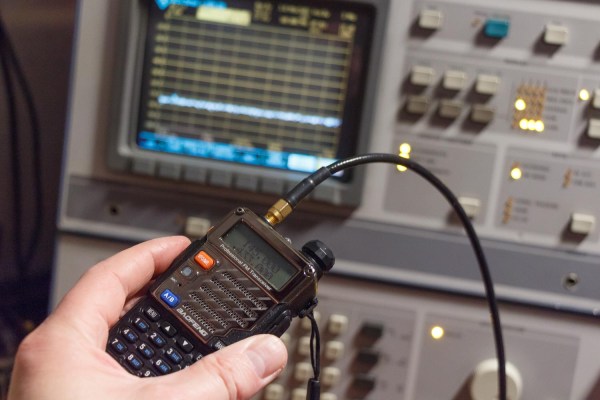 A Baofeng radio is often one of the first purchases a new ham radio operator makes these days due to the decent features and low price tag. They are far from perfect, but with a bit of creative inspiration, it’s possible to make the quirks work in your favor. By taking advantage of a loud pop on the earphone outputs whenever the LCD backlight turns on, [WhiskeyTangoHotel] built a radio traffic counter using an ESP8266.

Whenever there is a transmission on one of the frequencies the radio is tuned to, the backlight turns on. Connecting the audio output to an oscilloscope, [WhiskeyTangoHotel] measured a 5V spike whenever this happens. Using a pair of diodes in series to drop the voltage to a safe level, the ESP8266 detects the voltage spike and updates a Google spreadsheet with the timestamp via IFTTT.

This gave [WhiskeyTangoHotel] empirical data on how much traffic passes through the local VHF repeater, but we wouldn’t blame them if the hack itself was the real motivator.

Of course, this would also be a perfect application for the RTL-SDR, which should allow you to do the above and much more, all in software. Add a bit of AI and you can even extract the call signs. The RTL-SDR is also a good tool for learning about RF modulation. 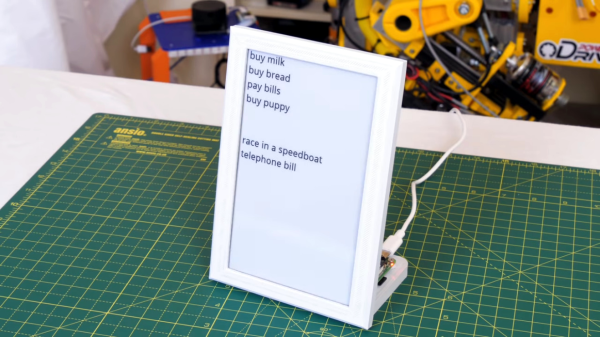 Are you still writing notes on paper and sticking them to the fridge like it’s the ’80s? Well, if you are, and you read this site, you’d probably like to upgrade to something a bit more 21st century. And, thanks to robot maker [James Bruton], you can leave your old, last century, message taking behind as he has a tutorial up showing you how to build an internet connected e-paper message display board. And, if you have a Raspberry Pi, an e-paper display and adapters just lying around doing nothing, then this project will cost you less than the buck that paper and a magnet will cost you.

Sarcasm aside, this is a pretty nice project. As mentioned, the base of this is a Raspberry Pi – [James] uses a Pi 4, but you could get away with an older, lower powered model as well. This powers the cheap(-ish) e-paper display he found online, which comes with the necessary adapters for the Pi, as well as a python library to write to the display. [James] uses a Google Sheet as the cloud storage for the message board, and there is some python code to access the cells in the Sheet and print them on the display if anything has changed. A cron job runs the script every 5 minutes to catch changes in the messages.

As with most of the projects that [James] does, he gives a good overview in the video and goes over the process of finding the hardware and writing and updating the script. He’s put the script and details as well as the CAD file for the frame he created for the project up on GitHub. [James] has been featured several times on the site before, check out some of his projects.

END_OF_DOCUMENT_TOKEN_TO_BE_REPLACED 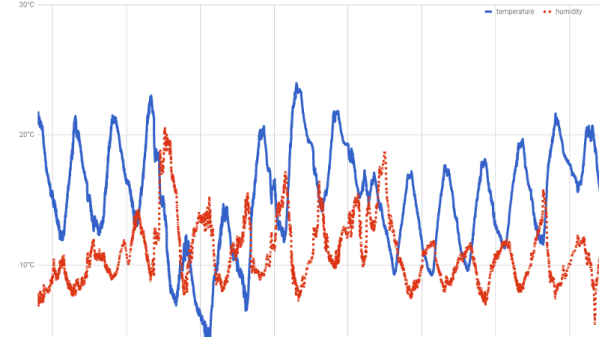 Pushing all of your data into “The Cloud” sounds great, until you remember that what you’re really talking about is somebody else’s computer. That means all your hard-crunched data could potentially become inaccessible should the company running the service go under or change the rules on you; a situation we’ve unfortunately already seen play out.

Which makes this project from [Zoltan Doczi] and [Róbert Szalóki] so appealing. Not only does it show how easy it can be to shuffle your data through the tubes and off to that big data center in the sky, but they send it to one of the few companies that seem incapable of losing market share: Google. But fear not, this isn’t some experimental sensor API that the Big G will decide it’s shutting down next Tuesday in favor of a nearly identical service with a different name. All your precious bits and bytes will be stored in one of Google’s flagship products: Sheets. 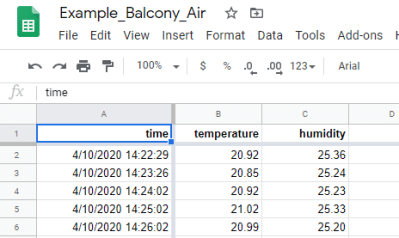 It turns out that Sheets has a “Deploy as Web App” function that will spit out a custom URL that clients can use to access the spreadsheet data. This project shows how that feature can be exploited with the help of a little Python code to push data directly into Google’s servers from the Raspberry Pi or other suitably diminutive computer.

Here they’re using a temperature and humidity sensor, but the only limitation is your imagination. As an added bonus, the chart and graph functions in Sheets can be used to make high-quality visualizations of your recorded data at no extra charge.

You might be wondering what would happen if a bunch of hackers all over the world started pushing data into Sheets every few seconds. Honestly, we don’t know. The last time we showed how you could interact with one of their services in unexpected ways, Google announced they were retiring it on the very same day. It was probably just a coincidence, but to be on the safe side, we’d recommend keeping the update frequency fairly low.

Back in 2012, before the service was even known as Google Sheets, we covered how you could do something very similar by manually assembling HTTP packets containing your data. We’d say this validates the concept for long-term data storage, but clearly the methodology has changed considerably in the intervening years. Somebody else’s computer, indeed.

In the last couple of decades we have become used to the browser taking over so many of the desktop functions for which we used to rely on stand-alone software. Email clients, calendars, office suites and much more can now be found in the cloud, courtesy of the usual technology companies.

Sometimes these cloud-based alternatives to desktop software can be a little sketchy, but often they have features that might surprise you as they edge towards parity with the packages they seek to replace. Google Docs, for instance has a full-featured built-in scripting language called Apps Script, that gives your full control of a document or spreadsheet with the help of a bit of Javascript. When [Brian Steffens] saw this it piqued his interest, so of course he had to in his words “do something weird with it”. The result of his efforts is the Google Sheets Virtual Machine, a virtual computer in software using spreadsheet cells as memory, stack, and registers.

With only a 100-cell memory and dependent entirely upon the processing power available to the host browser, this machine is not likely to set the world on fire. He gives full instruction set details, there are a couple of demo programs, a Fibonacci sequence generator and a factorial generator, but its general lack of power is not really the point. Instead its value lies in an elegant demonstration for its own sake that a virtual computer can be built in the unlikeliest of places, and for those interested enough to peer into its code, some idea how that might be achieved.

A garage door opener is a pretty classic hack around these parts. IR, Bluetooth, WiFi, smartphone controlled, web interfaces — we’ve seen it all.  But if you want to keep track of people going in and out, you need some way of logging what’s happening. You could go ahead and roll up your own SQL based solution, tied into a custom web page. But there’s an easier way; you can build a garage door opener that logs events to Google Drive.

[WhiskeyTangoHotel] was looking for an ESP8266 project, and a garage door opener seemed just the ticket. It’s simple enough to code up, and control over WiFi comes in handy. Interfacing with the garage door was simple enough — the existing opener uses a simple push button, which is easily controlled by wiring up a relay to do the job. Logging is as simple as having the ESP8266 send requests to IFTTT which is set up to make posts to a Google Sheet with status updates.

The project is fairly basic, but there’s room for expansion. By using separate Maker Channel triggers on IFTTT, different users of the garage door could be tracked. It would also be easy to add some limit switches or other sensors to detect the door’s position, so it can be determined whether the door was opened or closed.