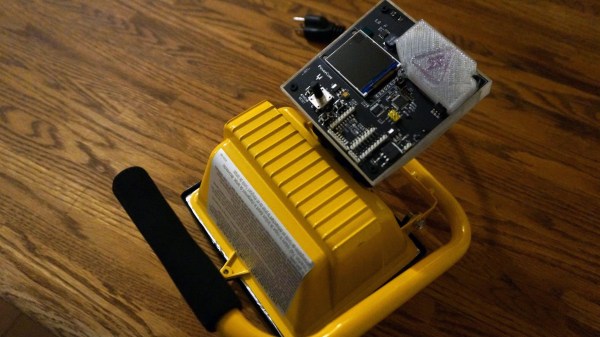 [nathan] sends in this combo of projects which combine to make a very interesting reflow oven.

First is PowerCore which has two microcontrollers, an ATmega and a ESP8366 working in tandem to turn the AC on and off at set intervals. A GLCD displays the current profiles and WiFi allows for remote control as well. Input is handled by a momentary switch rotary controller. He decided to go this route after reading forums on the commercial controllers and deciding they needed too much fiddling and weren’t hacker friendly enough.

The PowerCore then attaches to a halogen work light. He took the front glass off the halogen light and covered it in aluminum foil. This becomes the base of the oven. The PowerCore and a sensor are attached to the back. Using the lighting element as a heating one makes sense and, as we can see from the curves, appears to provide a very accurate response.

On top of all this [nathan] has documented the project beautifully. The small size and great control bump it way up in our list of reflow builds to recommend.

If you only have a car and you need to unsolder some tricky surface mount components: what would you do? If you’re Kasyan TV, you’d remove your car’s halogen lights and get to town. That’s right: car lights for reflow.

When the friend of the host of Kasyan TV needed to remove some roasted toasted FETs from his motherboard but didn’t have anything for reflowing, she took some headlights and used them as an infrared source to desolder the FETs. Powered by a lab supply (although car batteries work too), the process works with 60 and 100-watt bulbs.

Now, reflowing with halogen bulbs isn’t new, and we’ve seen it done with the run of the mill 100-watt bulbs and a halogen floodlight. However, what we really like about using car lights is that they’re available everywhere and we already own some that we could (temporarily) repurpose. Now, don’t get us wrong – if you’re going to be reflowing more than just a little, there are plenty of alternative methods that don’t involve staring at “rather bright lights” for extended periods of time.

People ’round these parts can’t seem to get enough of reflow: from open source reflow oven controllers to reflowing with a hair straightener we’ve seen quite a bit. If you’re new to the reflow arena, we’ve got zero to hero: reflow style just for you. And if DIY at home reflow isn’t intense enough for you, we’ve got next level reflowing as well.

The full video is after the break, complete with Kasyan TV’s sponsored segment in the middle..

END_OF_DOCUMENT_TOKEN_TO_BE_REPLACED

There are almost as many ways to reflow a surface-mount circuit board as there are hackers. Today, we add another method to the list. [Dasaki] converted a halogen floodlight into an SMT oven, and did so with all the bells and whistles. Check the video below the break.

We’ve actually seen the low-tech version of this hack before, but it’s nothing we would want to use on a daily basis. [Dasaki] needed to get 100 boards done, so it was worth the effort to get it right.

END_OF_DOCUMENT_TOKEN_TO_BE_REPLACED 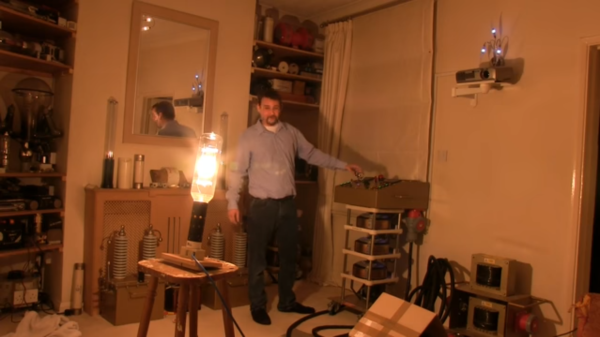 [Photonicinduction] purchased a very very bright light. This 20,000 Watt half meter tall halogen will just about light the back of a person’s skull with their eyes closed. These are typically used to light film sets.

Most people couldn’t even turn such a light on, but [Photonicinduction] is a mad scientist. Making lightning in his attic, it’s easy to mentally picture him as the villain in a Sherlock Holmes novel. Luckily for us, if he has any evil tendencies, they are channeled into YouTube videos.

He gives a good description of the mechanical and electrical properties of the light. The body is as one would expect for an incandescent light. A glass filament envelope with the filaments supported within. The envelope is evacuated and filled with an appropriate gas. This light is dangerous enough that the outside must be thoroughly cleaned of fingerprints to keep a hot-spot from forming, which could cause the lamp to explode.

After some work, he managed to convince himself that the filaments within were not, in fact, garage door springs, and gave a demonstration of their properties. For example, their resistance goes up as they are heated. In order to keep from tripping the power supply, filaments this large must be preheated. Failure to do so passes a very large number of amps.

The next step was to hook the lamp up to his home-made 20 kW power supply. He gives a good demonstration of just how bright it is. Within seconds he’s sweating from the heat and definitely can’t even open his eyes to see with the tiny sun occupying the center of his abode. Video after the break.

END_OF_DOCUMENT_TOKEN_TO_BE_REPLACED END_OF_DOCUMENT_TOKEN_TO_BE_REPLACED

[Matthias] sent us this project where he builds an AVR light controller. He had a halogen bike light laying around, but was unsatisfied with its lead-acid battery. He wanted to use a lithium-polymer battery but found that they can’t be used directly with halogen lamps due to their voltage. His produced 8.5 volts at full charge and can’t be discharged to below 5 volts. He new a power controller would be necessary to try to flatten that out for his lamp, which needed to stay between 6-12 volts.

He used an ATtiny45 doing PWM to change the voltage. Some other cool features he added were the high and low settings and an LED status light for warnings. You can find pictures, schematics and source code on his page as well as tons of great information. Great job [Matthias].