END_OF_DOCUMENT_TOKEN_TO_BE_REPLACED

Over on hackaday.io, [Arduino Enigma] posted the code for his clock that runs on a KIM Uno (the KIM-1 clone we mentioned late last year). Although the KIM Uno has a few demos preloaded (including Microchess and a scientific calculator), all of them take some interaction. The clock makes the KIM Uno a more dynamic desk display since it does something useful without any user interaction (once you set the clock, of course).

The project shows the code stored in ROM, but you can’t directly enter the program into ROM (which is really EEPROM on the host Arduino). The trick is to enter the address (that is press AD and then 0, 4, 0, 0) and then mash down the reset button for about a second. Then you can press DA and enter the hex codes provided (pressing + after each byte). Since the code is in nonvolatile storage, you can start it at any time by setting the time in RAM and executing the code at address 400.

END_OF_DOCUMENT_TOKEN_TO_BE_REPLACED 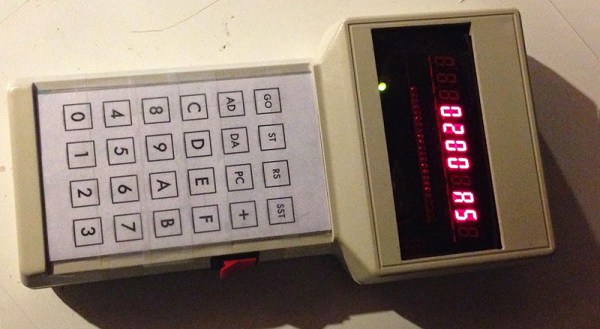 The KIM-1 was the first computer to use the 6502, a CPU that would later be found in the Apple, Ataris, Commodores, and the Nintendo Entertainment System. Being the first, the KIM-1 didn’t actually do a whole lot with only 1k of ROM and a bit more than 1k of RAM. This is great news for anyone with an Arduino; you can easily replicate an entire KIM-1, with a keypad and 7-segment display. That’s what [Scott] did, and he put it in an enclosure that would look right at home in a late 70s engineering lab.

The impetus for this build was [Scott]’s discovery of the KIM-Uno, a kit clone of the KIM-1 using an Arduino Pro Mini. The kit should arrive in a few weeks, so until then he decided to see if he could cobble one together with parts he had sitting around.

Inside a handheld industrial enclosure is an Arduino Uno, with a protoshield connecting the keypad and display. The display is an 11-digit, seven-segment display [Scott] picked up at a surplus shop, and the metal dome keypad came from a hamfest.

Getting the software working took a bit of work, but the most important parts are just modifications to the standard Arduino libraries.

Now that [Scott] has a KIM-1 replica, he can program this virtual 6502 one hex digit at a time, run Microchess, or use the entire thing as a programmable calculator. 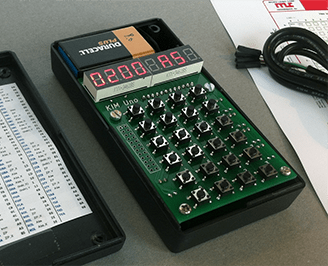 The KIM-1 wasn’t the first microcomputer available to computer hobbyists and other electron aficionados, but it was the first one that was cheap. It was also exceedingly simple, with just a 6502 CPU, a little more than 1k of RAM, 2k of ROM, a hexadecimal keypad and a few seven-segment displays. Still, a lot of software was written for this machine, and one of these boards can be found in every computer history museum.

[Oscar] thought the KIM-1 was far too cool to be relegated to the history books so he made his own. It’s not a direct copy – this one uses an Arduino for the brains, only breaking out some buttons, a pair of four-digit seven-segment displays, and the I2C and SPI pins on the ‘duino. The KIM-1 is emulated by the Arduino, allowing for the same interface as an original connected up to an old teletype, and [Oscar] got his hands on the original code for Microchess and the first 6502 disassembler from [Woz] and [Baum].

[Oscar] put the schematics for his version of the KIM-1 up, and has the PCBs up on SeeedStudio. If you’re looking for an awesome replica of a vintage computer and a nice weekend project, here ‘ya go.

Judging from the consignment area of the Vintage Computer Festival this weekend, there is still a booming market for vintage computers and other ephemera from the dawn of the era of the home computer. Even more interesting are reimaginings of vintage computers using modern parts, as shown by [Vince Briel] and his amazing retrocomputer kits.

[Vince] was at VCF East this weekend showing off a few of his wares. By far the most impressive (read: the most blinkey lights) is his Altair 8800 kit that emulates the genesis of the microcomputer revolution, the Altair. There’s no vintage hardware inside, everything is emulated on an ATmega microcontroller. Still, it’s accurate enough for the discerning retrocomputer aficionado, and has VGA output, a keyboard port, and an SD card slot.

The Replica I is an extremely cut down version of the original Apple, using the original 6502 CPU and 6821 PIA. Everything else on the board is decidedly modern, with a serial to USB controller for input and a Parallax Propeller doing the video. Even with these modern chips, an expansion slot is still there, allowing a serial card or compact flash drive to be connected to the computer.

Video below, with [Vince] showing off all his wares, including his very cool Kim-1 replica.

END_OF_DOCUMENT_TOKEN_TO_BE_REPLACED

Gather ’round children, we’re about to hear a story about the good old days. Except that this is really more of a horror story of what it used to be like as a code monkey. [John Graham-Cumming] shares his experience programming a 6502-based KIM-1 machine back in 1985. Simple, right? The caveat being that there was no assembler or hardware for loading the finished code!

The machine in question was a label application tool for a production line. You know, product goes in bottle, label gets slapped on the side. But the slapping needed to be perfect because consumers shy away from packaging that looks shoddy. Computer control would end up being far superior than the mechanical means the factory had been using because it simplifies the ability to adjust calibration and other parameters. [John] started from square one by interfacing the KIM-1 with the existing hardware. It has a hex keyboard which is how the program was entered into the device. But first he wrote the software on sheets of notebook paper like the one seen above. It includes his hand assembled code, which was then typed in on the keypad. Kind of makes you appreciate all the tools you take for granted (like Eclipse), huh?