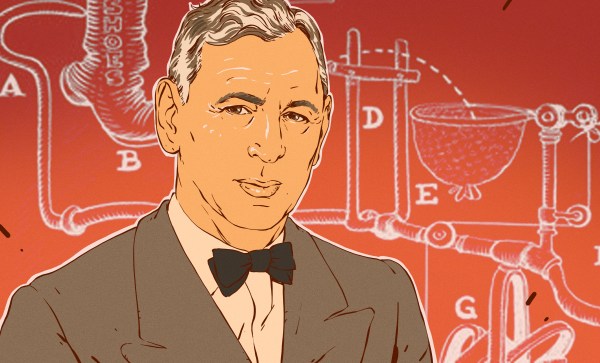 The name Rube Goldberg has long been synonymous with any overly-built contraption played for laughs that solves a simple problem through complicated means. But it might surprise you to learn that the man himself was not an engineer or inventor by trade — at least, not for long. Rube’s father was adamant that he become an engineer and so he got himself an engineering degree and a job with the city. Rube lasted six months engineering San Francisco’s sewer systems before quitting to pursue his true passion: cartooning.

Rube’s most famous cartoons — the contraptions that quickly became his legacy — were a tongue-in-cheek critique meant to satirize the tendency of technology to complicate our lives in its quest to simplify them. Interestingly, a few other countries have their own version of Rube Goldberg. In the UK it’s Heath Robinson, and in Denmark it’s Robert Storm Petersen, aka Storm P.

Rube Goldberg was a living legend who loved to poke fun at everything happening in the world around him. He became a household name early in his cartooning career, and was soon famous enough to endorse everything from cough drops to cigarettes. By 1931, Rube’s name was in the Merriam-Webster dictionary, his legacy forever cemented as the inventor of complicated machinery designed to perform simple tasks. As one historian put it, Rube’s influence on culture is hard to overstate.

END_OF_DOCUMENT_TOKEN_TO_BE_REPLACED 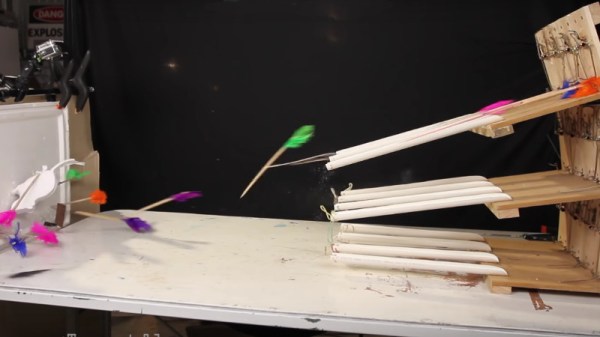 Many Hackaday readers may also be familiar with the Discworld series of fantasy novels from [Terry Pratchett], and thus might recognise a weapon referred to as the Piecemaker. A siege crossbow modified to launch a hail of supersonic arrows, it was the favoured sidearm of a troll police officer, and would frequently appear disintegrating large parts of the miscreants’ Evil Lairs to comedic effect.

Just as a non-police-officer walking the streets of Ank-Morpork with a Piecemaker might find swiftly themselves in the Patrician’s scorpion pit, we’re guessing ownership of such a fearsome weapon might earn you a free ride in a police car here on Roundworld. But those of you wishing for just a taste of the arrow-hail action needn’t give up hope, because [Turnah81] has made something close to it on a smaller scale. His array of twelve mousetrap-triggered catapults fires a volley of darts made from wooden kebab skewers in an entertaining fashion, and has enough force to penetrate a sheet of cardboard.

He refers to a previous project with a single dart, and this one is in many respects twelve of that project in an array. But in building it he solves some surprisingly tricky engineering problems, such as matching the power of multiple rubber bands, or creating a linkage capable of triggering twelve mousetraps (almost) in unison. His solution, a system of bent coat-hanger wires actuated by the falling bar of each trap, triggers each successive trap in a near-simultaneous crescendo of arrow firepower.

On one hand this is a project with more than a touch of frivolity about it. But the seriousness with which he approaches it and sorts out its teething troubles makes it an interesting watch, and his testing it as a labour-saving device for common household tasks made us laugh. Take a look, we’ve put the video below the break.

END_OF_DOCUMENT_TOKEN_TO_BE_REPLACED 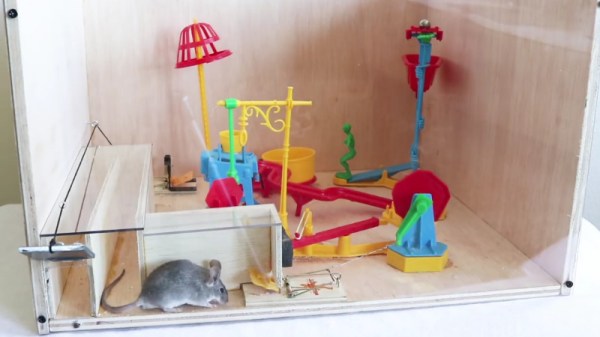 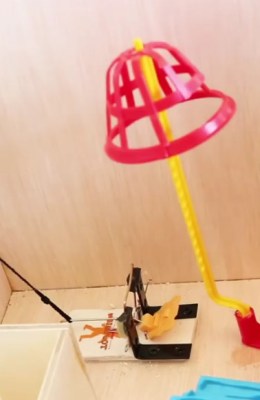 END_OF_DOCUMENT_TOKEN_TO_BE_REPLACED

Build a better mousetrap, and the world will beat a path to your door, but what about a smarter mousetrap? [Alain] decided to find out by making a Raspberry Pi-powered, Internet-connected smart trap. The brains of the operation is a Pi running Arch Linux. Connected to that is a IR trigger, a servo to unlatch the sliding door, and a camera to see your new friend.

The housing of the trap is CNC cut foam PVC board, which is both easy to cut and to clean. Once the IR beam is broken the Pi turns the servo, which pulls a pin on the front door. Once your new friend is settled in a LED light turns on to illuminate the subject, a picture is taken and sent via email.

With automated alerts you don’t have to manually check the trap, and you also don’t have to worry about a trapped animal being inside for too long. Join us after the break for a demonstration video showing off all the features, and a real world example.

END_OF_DOCUMENT_TOKEN_TO_BE_REPLACED

Who knew you could build your own digital computer out of paperclips? EMSL did a great feature on the guide which was published in 1968.

Trying to keep your Raspberry Pi from overheating? Make it log its core temperature on the web.

[Lennart] must be some kind of Eagle CAD guru. Check out these PCBs that incorporate his logo in a very artsy way.

No need for a tripod when you can just strap the video camera to your safety glasses for some POV project videos.

Turn your Pogoplug E-02 into a Shairport (Airplay clone) music hub. Just follow this guide which installs Arch Linux and all the supporting packages you need.

We don’t have the background to judge the quality of this build. But you have to admit it’s pretty neat to see a radio telescope built using a tin can and an umbrella.

Dead rodent email: get a notification every time your mouse trap springs.

We’re familiar with induction cook tops but we never thought to power a microcontroller with one. [Thanks Hadez]

We’ve been big fans of the chain reaction demonstration using ping-pong balls and mouse traps ever since we saw [Mr. Wizard] do it back in the day. If you don’t know what we’re talking about, check out this demonstration that is analogous of a fission reaction. [Thanks nateL]

If you’re interested in using your smart phone for some photography, [Mike] has a nice wood and elastic mount for an iPhone which you might try yourself.

Admittedly we’re a bit late on this one. But keep it in mind for next year: you can use some zip ties for added traction on your bike when it snows. [Thanks Rob]

Now you can BE mario

A little Kinect script lets this gentleman play Super Mario Bros. with his body. Now you can have all the fun that goes along with being a pixellated character stuck in a two-dimensional environment (plus, there are shrooms). [Thanks Das_Coach via Slashdot]