Masks are proven tools against airborne diseases, but pathogens — like the COVID-19 virus — can collect in a mask and survive which complicates handling and disposal. [Ilaria Rubino], a researcher at the University of Alberta, recently received an award for her work showing how treating a mask’s main filtration layer with a solution of mostly salt and water (plus a surfactant to help the wetting process) can help a mask inactivate pathogens on contact, thereby making masks potentially re-usable. Such masks are usually intended as single-use, and in clinical settings used masks are handled and disposed of as biohazard waste, because they can contain active pathogens. This salt treatment gives a mask a kind of self-cleaning ability.

How exactly does salt help? The very fine salt coating deposited on the fibers of a mask’s filtration layer first dissolves on contact with airborne pathogens, then undergoes evaporation-induced recrystallization. Pathogens caught in the filter are therefore exposed to an increasingly-high concentration saline solution and are then physically damaged. There is a bit of a trick to getting the salt deposited evenly on the polypropylene filter fibers, since the synthetic fibers are naturally hydrophobic, but a wetting process takes care of that.

The salt coating on the fibers is very fine, doesn’t affect breathability of the mask, and has been shown to be effective even in harsh environments. The research paper states that “salt coatings retained the pathogen inactivation capability at harsh environmental conditions (37 °C and a relative humidity of 70%, 80% and 90%).”

Again, the salt treatment doesn’t affect the mask’s ability to filter pathogens, but it does inactivate trapped pathogens, giving masks a kind of self-cleaning ability. Interested in the nuts and bolts of how researchers created the salt-treated filters? The Methods section of the paper linked at the head of this post (as well as the Methods section in this earlier paper on the same topic) has all the ingredients, part numbers, and measurements. While you’re at it, maybe brush up on commercially-available masks and what’s inside them.

END_OF_DOCUMENT_TOKEN_TO_BE_REPLACED 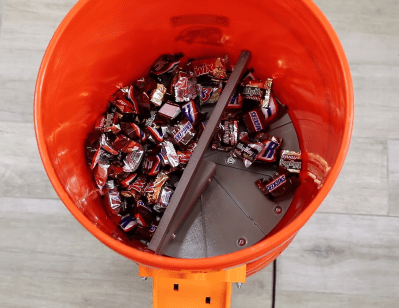 END_OF_DOCUMENT_TOKEN_TO_BE_REPLACED

Back in April we challenged hackers to make the best of a tough situation by spending their time in isolation building with what they had laying around the shop. The pandemic might have forced us to stay in our homes and brought global shipping to a near standstill, but judging by the nearly 300 projects that were ultimately entered into the Making Tech At Home Contest, it certainly didn’t stifle the creativity of the incredible Hackaday community.

While it’s never easy selecting the winners, we think you’ll agree that the Inverse Thermal Camera is really something special. Combining a surplus thermal printer, STM32F103 Blue Pill, and OV7670 camera module inside an enclosure made from scraps of copper clad PCB, the gadget prints out the captured images on a roll of receipt paper like some kind of post-apocalyptic lo-fi Polaroid.

The HexMatrix Clock also exemplified the theme of working with what you have, as the electronics were nothing more exotic than a string of WS2811 LEDs and either an Arduino or ESP8266 to drive them. With the LEDs mounted into a 3D printed frame and diffuser, this unique display has an almost alien beauty about it. If you like that concept and have a few more RGB LEDs laying around, then you’ll love the Hive Lamp which took a very similar idea and stretched it out into the third dimension to create a standing technicolor light source that wouldn’t be out of place on a starship.

Each of these three top projects will receive a collection of parts and tools courtesy of Digi-Key valued at $500.

Out friends at Digi-Key were also kind enough to provide smaller grab bags of electronic goodies to the creators of the following 30 projects to help them keep hacking in these trying times:

The Making Tech At Home Contest might be over, but unfortunately, it looks like COVID-19 will be hanging around for a bit. Hopefully some of these incredible projects will inspire you to make the most out of your longer than expected downtime.