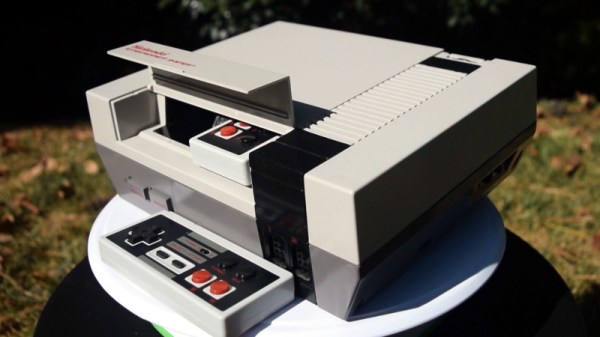 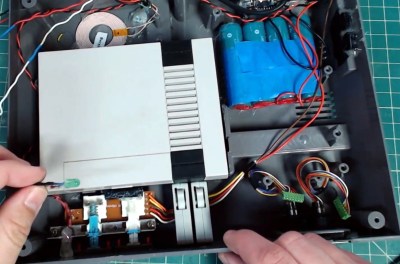 END_OF_DOCUMENT_TOKEN_TO_BE_REPLACED

On a bicycle you’re typically looking ahead and slightly down to make sure you don’t ride over any potholes. While a speedometer is great on the handlebars, what if you could project your speed and other information onto the road ahead? Well, it turns out if you have a smartphone and a bit of ingenuity, you can do just that!

We’ve seen this hack done before with a pico projector, but that’s a pretty big investment for your bicycle. So [Peter] had another idea. What if you could just use your cellphone as is and a bit of optics? It turns out you can buy some pretty cheap “cell phone projectors” from China or Amazon — it’s basically a little cardboard box that your phone fits into, with a cheap plastic lens to project your image. Lumen output is pretty miserable, but if you’re riding at night, it is enough to see by!

END_OF_DOCUMENT_TOKEN_TO_BE_REPLACED 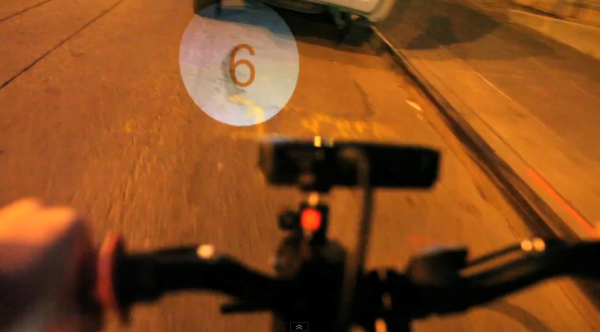 This thing is so cool it almost looks fake. But [Matt Richardson] isn’t a hoaxster. He actually built what might be called a heads-down display for your bicycle. He refers to it as a headlight because it borrows a similar function. It mounts on the handlebars and shoots light off the front of the bike. But it’s more than just a battery and a bulb, this uses a pico-projector to give that light some meaning. In the video after the break he shows it off on the streets of NYC.

So far he’s only displaying information that has to do with the speed of travel, but the proof is there just waiting for a brilliant new use. Feeding the projector is a Raspberry Pi board. For this prototype [Matt] mounted it, along with the portable cellphone charger which plays the role of the power source, on a hunk of hardboard strapped inside the bike frame.

If you’re thinking of doing this one yourself beware of the BOM price tag. That projector he’s using runs upwards of $400. We wonder if you could hack together a rudimentary replacement with an old cellphone screen and this diy film projector?

END_OF_DOCUMENT_TOKEN_TO_BE_REPLACED

Over the last four years, [Will] and [Gav] have spent their time creating a huge, high-resolution 3D display. The’re just about done with their build, so they decided to offer it up to the Internet in the hopes of people creating new 3D content for their display. They call their project the HoloDome, and it’s the highest resolution volumetric display we’ve ever seen.

The HoloDome operates by spinning a translucent helix around its vertical axis at 20 rotations per second. A pico projector above the helix capable of projecting 1440 frames per second (an amazing device by itself) displays 72 ‘z-axis’ frames for each of the 60 ‘x and y frames’ per second. The result is a 3D display with a 480 * 320 * 72 voxel resolution capable of displaying 20 frames per second.

This isn’t the first time we’ve seen a swept helix used as a volumetric display, but it is by far the highest resolution display of its type in recent memory. [Gav] and [Will] have put their HoloDome up on the Australian crowd-funded site Pozible if you’d like to buy your own, but thankfully the guys have included enough detail on the main site to reconstruct this project.

Check out the video after the break to see the HoloDome in action.

END_OF_DOCUMENT_TOKEN_TO_BE_REPLACED This image should look familiar to regular readers. It’s a concept that [Chris Harrison] has been working on for a while, and this hardware upgrade uses equipment which which we’re all familiar.

The newest rendition, which is named the Omnitouch, uses a shoulder-mounted system for both input and output. The functionality is the same as his Skinput project, but the goal is achieved in a different way. That used an arm cuff to electrically sense when and where you were touching your arm or hand. This uses a depth camera to do the sensing. In both cases, a pico projector provides the interactive feedback.

There’s a couple of really neat things about this upgrade. First, it has a pretty accurate multitouch capability. Second, it allows more surfaces to be used than just your arm. In fact, it can track moving surfaces and adjust accordingly. This is shown in the clip after the break when a printed document is edited in real time. Pretty neat stuff!

END_OF_DOCUMENT_TOKEN_TO_BE_REPLACED

[Nirav] has been working on a spherical display for about a year now, and he just came up with a great way of interacting with this screen: an adjacent reality tracker that rotates the display to match the current orientation of the controller.

Earlier, [Nirav] built an 8-inch sphere display using a few 3D printed parts and a Showwx laser pico projector. The display looked great, but [Nirav] had no way to interact with it. To solve that problem, he put an inertial measurement unit inside a 3d printed model of the globe. The IMU communicates with a computer to read the rotation and orientation of [Nirav]’s controller and adjust the spherical display accordingly.

It’s a very nice build that gets very close to futuristic sci-fi displays. At least now, [Nirav] can interact with the awesome satellite tracking app and continental drift simulation he created.

There’s a bunch of videos [Nirav] put up demoing what his display can do. You can check those out after the break.