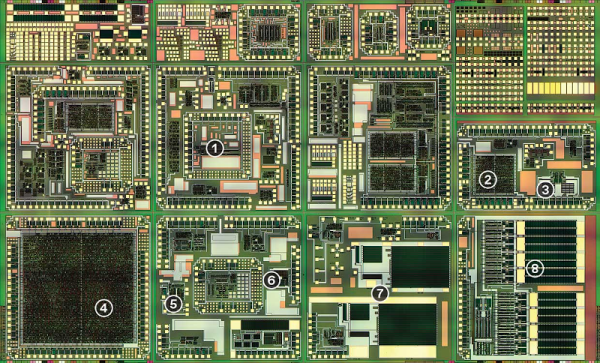 IEEE Spectrum had an interesting read about circuits using silicon carbide as a substrate. [Alan Mantooth] and colleagues say that circuits based on this or some other rugged technology will be necessary for missions to Venus, which they liken to hell. That might seem like hyperbole, but at about 460C with an atmosphere full of sulphuric acid, maybe it isn’t such a stretch. When the Soviets sent Venera 13 to Venus, it was able to send data for just over two hours before it was gone. You’d hope 40 years later we could do better.

Silicon carbide is a semiconductor made with an even mix of silicon and carbon. The resulting components can operate for at least a year at 500C. This high-temperature operation has earned them a place in solar energy and other demanding applications.  [Alan], with the University of Arkansas along with colleagues from the KTH Royal Insitute of Technology in Stockholm are building test circuits aimed at developing high-temperature radios for use in environments like the one found on Venus.

END_OF_DOCUMENT_TOKEN_TO_BE_REPLACED

After spending much of the 20th century languishing in development hell, electric cars have finally hit the roads in a big way. Automakers are working feverishly to improve range and recharge times to make vehicles more palatable to consumers.

With a strong base of sales and increased uncertainty about the future of fossil fuels, improvements are happening at a rapid pace. Oftentimes, change is gradual, but every so often, a brand new technology promises to bring a step change in performance. Silicon carbide (SiC) semiconductors are just such a technology, and have already begun to revolutionise the industry.

Traditionally, electric vehicles have relied on silicon power transistors in their construction. Having long been the most popular semiconductor material, new technological advances have opened it up to competition. Different semiconductor materials have varying properties that make them better suited for various applications, with silicon carbide being particularly attractive for high-power applications. It all comes down to the bandgap.

Electrons in a semiconductor can sit in one of two energy bands – the valence band, or the conducting band. To jump from the valence band to the conducting band, the electron needs to reach the energy level of the conducting band, jumping the band gap where no electrons can exist. In silicon, the bandgap is around 1-1.5 electron volts (eV), while in silicon carbide, the band gap of the material is on the order of 2.3-3.3 eV. This higher band gap makes the breakdown voltage of silicon carbide parts far higher, as a far stronger electric field is required to overcome the gap. Many contemporary electric cars operate with 400 V batteries, with Porsche equipping their Taycan with an 800 V system. The naturally high breakdown voltage of silicon carbide makes it highly suited to work in these applications.

END_OF_DOCUMENT_TOKEN_TO_BE_REPLACED 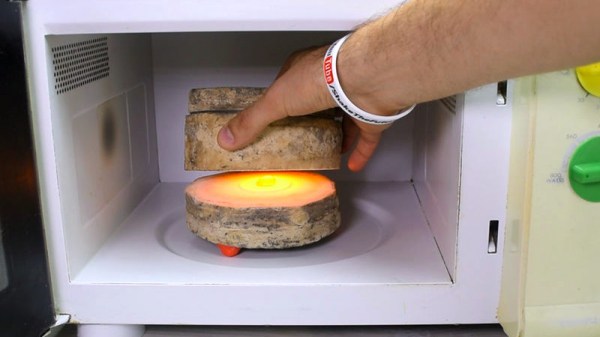 We are normally told that microwave ovens are strictly for food only, and that anything else will cause all sorts of bad things to come our way. There can be few readers who haven’t at some time seen the shower of sparks when an inadvertent metallic object finds its way onto the turntable.

A particularly useful non-food application for a microwave oven comes in the form of the small kilns sold for glass fusing. These are ceramic cylinders coated internally with silicon carbide, and [ShakeTheFuture] shows us how to make your own.

Key to the process is ceramic fibre insulation, which is bonded both to itself and to the fused silicon carbide grit by a cured solution of waterglass, sodium silicate. The result can easily reach the required temperature for fusing glass, but also has an application in burning out surplus wax or PLA from a plaster mould. It’s particularly interesting to see the technique with the waterglass in action, and you can see a run-down of the whole thing in the video below the break.

END_OF_DOCUMENT_TOKEN_TO_BE_REPLACED [Grenadier] had a piece of silicon carbide sitting around that he planned to use when making a primitive diode called a Cat’sWhisker Diode. While probing he noticed that one of the crystals threw off a bit of light. He popped it off and used JB Weld to attach it to a brass plate. The peculiar thing is that it generates light when power is run through it both forward and reverse biased. So what’s going on here? According to an informed discussion on the phenomenon there’s actually a pair of diodes in series but with their polarity reversed.