While the people at Netflix were busy killing weekends around the world with marathon viewings of 90s sitcoms, they also found time to release the Netflix Switch. It’s a small device with a single button that will control your TV, turn off the lights, and order a pizza. Remember, time you enjoy wasting is not wasted time. 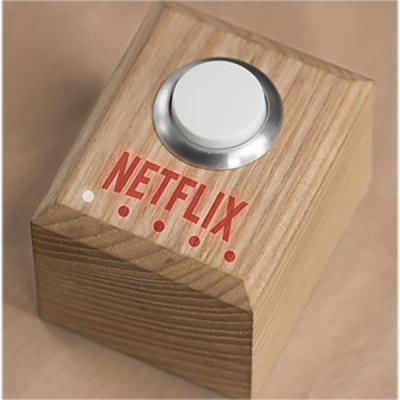 The Netflix Switch is a relatively simple device powered by a Particle Core, an Arduino-compatible development board with on-board WiFi. Also in this box is a LiPo battery, a few LEDs, and an IR transmitter that will send the same IR signal as the Netflix button on your TV remote, should your remote have a Netflix button.

In an unprecedented break from reality, this astute corporate branding of electronics tinkering also has design files, schematics, and real instructions that come along with it. Netflix released all of the mechanical files for their switch in Solidworks format; for the low, low price of only $4000 per Solidworks license, you too can Netflix and Chill.

Although Netflix’ implementation of tapping into a DIY electronics movement that has been around for 100 years is lacking, the spirit of the build is laudable. A single button connected to the Internet is a universal tool, and whether you want to order a pizza or make a ‘do not disturb’ button for your phone, the only limitation for the Netflix and Chill button is your imagination. 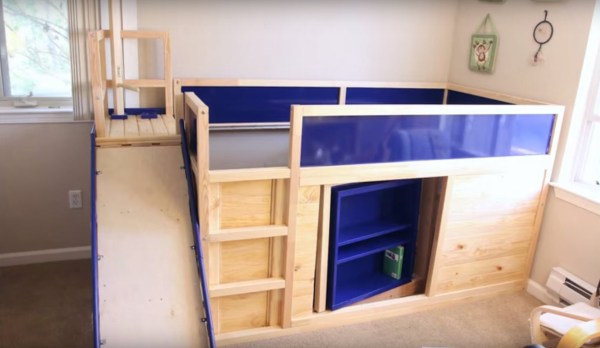 When [Eric Strong’s] son outgrew his convertible crib, he didn’t want to give it up. Needing the bed for their next youngest, [Eric] made his son a deal. He was going to build him the ultimate big boy bed. And boy did he ever!

Using Ikea Hackers for inspiration, [Eric] came up with a bed that features not only a slide, a ball game, a secret room hidden behind a bookcase, a hidden window, and a back door escape hatch — but even a bed. Kind of sounds like one of those too-good-to-be-true infomercials!

And he built it using only three products from IKEA. Two Kura beds (one for building materials), a Trofast tiered shelf storage unit, and a Besta — a small bookshelf. Pretty resourceful! And because he had limited space to build it, the whole thing is still modular. Stick around after the break to see it in action!

END_OF_DOCUMENT_TOKEN_TO_BE_REPLACED

Hackaday Overlord [Matt] is holding an SMT and BGA soldering workshop in San Francisco on October 4th. Teaching BGA soldering? Yes! He made a board where the BGA balls are connected to LEDs. Very, very clever.

Our ‘ol friend [Jeremey Cook] built a strandbeest out of MDF. It’s huge, heavy, about the size of a small car, and it doesn’t work. [Jeremy] has built beests before, but these were relatively small. The big MDF beest is having some problems with friction, and a tendency to shear along the joints. If anyone wants to fix this beest, give [Jeremy] a ring.

Everyone loves the Teensy, and [Paul] has released his latest design iteration. The Teensy 3.2 isn’t that much different from the Teensy 3.1; the bootloader has changed and now USB D+ and D- lines are broken out. Other than that, it’s just the latest iteration of the popular Teensy platform.

The DyIO is a pretty neat robotics controller, a semifinalist for the Hackaday Prize, and now a Kickstarter. The big win of the Kickstarter is an electronics board (with WiFi) that is able to control 24 servos for all your robotics needs.

[pighixxx] does illustrations of pinouts for popular electronics platforms. Everyone needs a hobby, I guess. He recently put together an illustration of the ESP8266. Neat stuff is hidden deep in this site.

You would not believe how much engineering goes into making snake oil. And then you need to do certifications!

[David] identified a problem, created a solution, got a patent, and is now manufacturing a product. The only problem is the name.

The number of things that can carry Internet traffic is always increasing. Now, you can add LED light bulbs to this list, as engineers in Disney Research have just demonstrated a system that transmits Internet traffic using an LED light bulb. This method of communication isn’t new: Visible Light Communication (VLC) has been demonstrated before by Disney and others, but this project puts it into a standard LED light bulb. This bulb has been modified to include an Atheros AR9331 SoC running OpenWRT and an Atmel ATmega328p that controls the LED elements and sensors that send and receive the data. So, the device is acting as a gateway between a WiFi network and a VLC one.

Disney’s new test system (PDF link) isn’t especially fast: it can only carry about 380 to 400 bits per second, so it won’t be streaming video anytime soon. That is definitely fast enough, though to send control data to a toy, or to send a continual stream of updated data to a device in the room, such as an ebook reader with a continually updated encyclopaedia. This being Disney, the authors coin a new phrase to end their paper: The Internet of Toys.

You have an FPGA circuit and you want the user to interact with your circuit by pushing a button. Clearly, you need a button, right? Not so fast! [Clifford Wolf] recently found a mysterious effect that lets him detect when someone pushes on his iCEstick board.

The video below shows the mystery circuit (which is just the stock iCEstick board), which appears to react any time you flex the PC board. The Verilog implements a simple ring oscillator (basically an inverter with its output tied to its input).

END_OF_DOCUMENT_TOKEN_TO_BE_REPLACED

Visualizing how electronic signals work can be difficult. A physical model can be darn useful in overcoming that difficulty. At a recent workshop entitled “Unboxing Black Boxes” [Julian Hespenheide’s] group created a device to show Baudot Code in operation. This amalgam of wood and Arduino they dubbed émile in honor of Émile Baudot (1845-1903).

Baudot developed his code to transmit telegraph signals from one machine to another, in contrast to Morse code which was principally for human communication. Both codes were used throughout the 20th century. For example, those big clattering, mechanical teletype machines use a minor variation of Baudot code.

Baudot is a fixed length code of 5 bits, as opposed to Morse’s variable length code. Morse has a separate code for each characters while Baudot uses “shift’ codes to change between alphabet and figure characters. For instance, a binary 11 would represent either an ‘A’ or a ‘-‘ depending on the shift state. If the shift code was missed the receiver would get gibberish.

In émile the Baudot code is sent by marbles. That’s right, marbles. There are five marbles, one for each bit in the Baudot code. Each marble rolls in a track toward the Arduino. How does the machine know which marbles to send? “Punch cards”! These are a marvelous aspect of the design.

Each card represents a code. Each position in the card has a gap to allow a marble to pass ( a set bit), or no gap to block the marble (an unset bit). The operator loads 5 marbles and a punch card and launches the marbles via a spring mechanism.

[Julian’s] really created a great visualization of Baudot code with this project! Take a look at émile in action after the break. END_OF_DOCUMENT_TOKEN_TO_BE_REPLACED 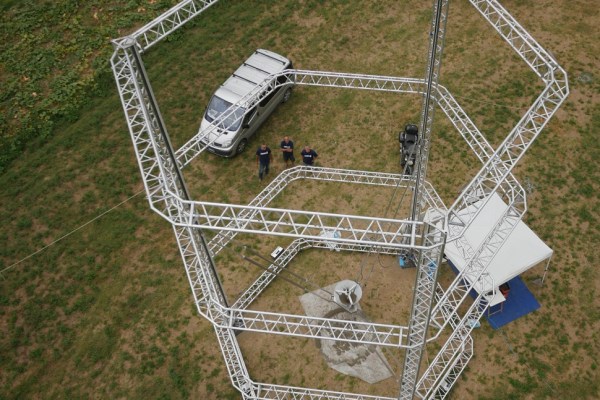