[Morphje] has always wanted to build a geodesic dome. The shape and design, and the possibility of building one with basic materials interest him. So with the help of a few friends to erect the finished dome, he set about realising his ambition by building a 9.1 metre diameter structure.

The action took place at Rev Space (Dutch language site), the hackspace in The Hague, Netherlands. [Morphje] first had to create a huge number of wooden struts, each with a piece of tube hammered down to a flat lug set in each end, and with a collar on the outside of the strut to prevent it from splitting. The action of flattening the ends of hundreds of pieces of tube is a fairly simple process if you own a hefty fly press with the correct tooling set up in it, but [Morphje] didn’t have that luxury, and had to hammer each one flat by hand.

The struts are then bolted together by those flattened tube lugs into triangular sections, and those triangles are further bolted together into the final dome. Or that’s the theory. In the video below you can see they make an aborted start assembling the dome from the outside inwards, before changing tack to assemble it from the roof downwards.

This project is still a work-in-progress, [Morphje] has only assembled the frame of the dome and it has no covering or door as yet. But it’s still a build worth following, and we look forward to seeing the finished dome at one or other of the European maker events in the summer.

END_OF_DOCUMENT_TOKEN_TO_BE_REPLACED 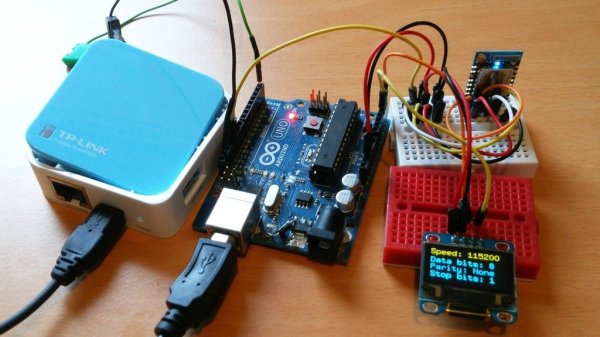 This simple WiFi serial port monitor would have saved us a lot of trouble. We can’t count how many times where being hooked into an Arduino with USB just to get the serial out has nearly been more trouble than it’s worth. Times where we sat cross-legged on the floor and could choose comfort or accidentally shifting the set-up and ruining everything, but not both.

[Frenky]’s set-up is simple and clever. The Ardunio’s serial out is hooked to an ESP8266. The Arduino spams serial out to the ESP8266 in its usual way. The ESP8266 then pipes all that out to a simple JavaScript webpage. Connect to the ESP8266’s IP with any device in your house, and get a live stream of all the serial data. Neat.

As simple as this technique is, we can see ourselves making a neat little box with TX, RX, GND, and VCC screw terminals to free us from the nightmare of tethering on concrete floors just for a simple test. Video after the break.

END_OF_DOCUMENT_TOKEN_TO_BE_REPLACED 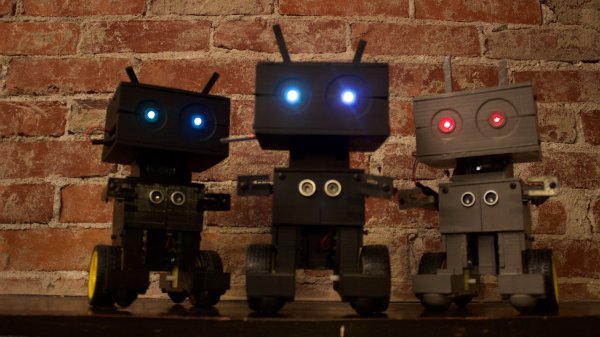 We watched the video introduction for this little open source robot, and while we’re not 100% sure we want tiny glowing eyes watching us while we sleep, it does seem to be a nice little platform for hacking. The robot is a side project of [Matthew], who’s studying for a degree in Information Science.

The robot has little actuated grippy arms for holding a cell phone in the front. When it’t not holding a cellphone it can use its two little ultrasonic senors to run around without bumping into things. We like the passive balancing used on the robot. Rather than having a complicated self-balancing set-up, the robot just uses little ball casters to provide the other righting points of contact.

The head of the robot has plenty of space for whatever flavor of Arduino you prefer. A few hours of 3D printing and some vitamins is all you need to have a little robot shadow lurking in your room. Video after the break.

END_OF_DOCUMENT_TOKEN_TO_BE_REPLACED

The Colecovision was a state-of-the-art game console back in 1983. Based around the Z-80, it was almost a personal computer (and, with the Adam add-on, it could serve that function, complete with a daisy wheel printer for output). [Kernelcrash] set out to recreate the Colecovision on a breadboard and kept notes of the process.

His earlier project was building a Funvision (a rebranded VTech Creativision) on a breadboard, so he started with the parts he had from that project. He did make some design changes (for example, generating separate clocks instead of using the original design’s method for producing the different frequencies needed).

END_OF_DOCUMENT_TOKEN_TO_BE_REPLACED

It’s that time of year again. In March, Austin Texas transforms itself into a nexus of art and technology and holds a celebration of Music, Film, and something called Interactive. It turns out that we’re Interactive: Hackaday will once again be at SXSW and we want you to join us there — Austin is excellent at showing everyone a fun time (as long as you don’t need to drive anywhere).

We’ll be on site starting this Friday (3/11/16) and we want you to come party with us at the Hardware House starting at 6pm. This is the third year that Hardware House has hosted, and last year the party was packed with a ton of interesting people, including some Hackaday alums who were there by coincidence. This year you can expect the same, but the fun doesn’t stop on Friday. [Sophi Kravitz] will be hosting a panel on Sunday at 5pm about Technology and Social Change.

Our main event is on Monday (3/14) at noon: Lunch with Hackaday as we launch the world premier of the 2016 Hackaday Prize film. On hand for the SXSW events are [Sophi Kravitz], [Chris Gammell], [Aleksandar Bradic], [Amber Cunningham], [Michael Guilfoil], and [Ivan Lazarevic].

But even after SXSW, we’re not done with the Lone Star State. [Brandon Dunson] and [Mike Szczys] will be at Hackaday Prize Worldwide: Dallas the following weekend at the Dallas Makerspace. Get excited Texas, we certainly are!

For the last few decades, the computer keyboard has been seen as just another peripheral. There’s no need to buy a quality keyboard, conventional wisdom goes, because there’s no real difference between the fancy, ‘enthusiast’ keyboards and ubiquitous Dell keyboards that inhabit the IT closets of offices the world over.

Just like the mechanic who will only buy a specific brand of wrenches, the engineer who has a favorite pair of tweezers, or the amateur woodworker who uses a hand plane made 150 years ago, some people who use keyboards eight or twelve hours a day have realized the older tools of the trade are better. Old keyboards, or at least ones with mechanical switches, aren’t gummy, they’re precise, you don’t have to hammer on them to type, and they’re more ergonomic. They sound better. Even if it’s just a placebo effect, it doesn’t matter: there’s an effect.

This realization has led to the proliferation of high-end keyboards and keyboard aficionados hammering away on boards loaded up with Cherry MX, Alps, Gateron, Topre, and other purely ‘mechanical’ key switches. Today, there are more options available to typing enthusiasts than ever before, even though some holdouts are still pecking away at the keyboard that came with the same computer they bought in 1989.

The market is growing, popularity is up, and with that comes a herculean effort to revive what could be considered the greatest keyboard of all time. This is the revival of the IBM 4704 terminal keyboard. Originally sold to banks and other institutions, this 62-key IBM Model F keyboard is rare and coveted. Obtaining one today means finding one behind a shelf in an IT closet, or bidding $500 on an eBay auction and hoping for the best.

Now, this keyboard is coming back from the dead, and unlike the IBM Model M that has been manufactured continuously for 30 years, the 62-key IBM Model F ‘Kishsaver’ keyboard is being brought back to life by building new molds, designing new circuit boards, and remanufacturing everything IBM did in the late 1970s.
END_OF_DOCUMENT_TOKEN_TO_BE_REPLACED