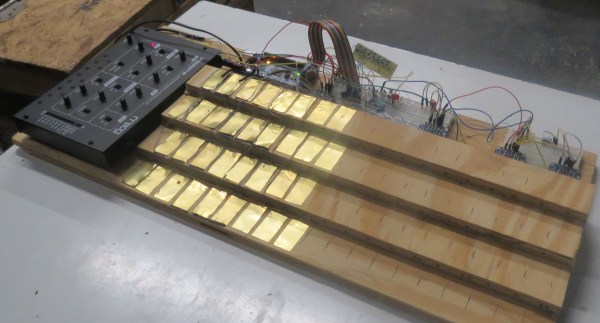 [Ben Bradley], a member of Freeside Atlanta, built a capacitive touch Jankó keyboard for the Georgia Tech Moog Hackathon. Jankó Keyboards are a 19th-Century attempt to add a more compact piano keyboard. There are three times as many keys as a traditional piano but arranged vertically for (supposedly) greater convenience while playing–an entire octave can be covered with one hand. But yeah, it never caught on.

[Ben]’s project consists of a series of brass plates wired to capacitive touch breakout boards from Adafruit, one for each of the Arduino Mega clone’s four I2C addresses. When a key is touched, the Arduino sends a key down signal to the Werkstatt while using a R-2R ladder to generate voltage for the VCO exponential input.

The most recent Moog Hackathon was the third.  Twenty-five teams competed from Georgia Tech alone, plus more from other schools, working for 48 hours to build interfaces with Moog Werkstatt-Ø1 analog synths, competing for $5,000 in cash prizes as well as Werkstatts for the top three teams.

We’re synth-fiends here on Hackaday: we cover everything from analog synths to voltage controlled filters.

END_OF_DOCUMENT_TOKEN_TO_BE_REPLACED

You would be forgiven to think that 3D printing is only about rolls of filament and tubs of resin. The fact is, there are many more 3D printing technologies out there. Everything from powders to paper can be used to manufacture a 3D model. [Jure]’s Hackaday Prize entry is meant to explore those weirder 3D manufacturing techniques. This is a printer that lays down binder over a reservoir of powder, slowly building up objects made out of minerals.

The key question with a powder printer is exactly what material this printer will use. For this project, [Jure] is planning on printing with hydroxyapatite, a mineral that makes up about 70% of bones by weight. Printing bones — yes, they do that — is quite expensive and has diverse applications.

The design of this printer is about what you would expect. It’s a Cartesian design with a roller to distribute powder, a piston to drop the part down into the frame, and an industrial inkjet printhead designed for wide format printers. It’s a fantastic piece of work and one of the better powder printers we’ve seen, and we can’t wait to see what [Jure] is able to produce with this. 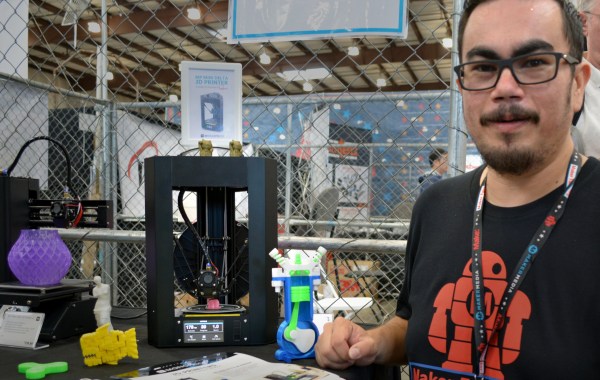 When I was at Bay Area Maker Faire a few weekends ago I stopped by the Monoprice booth to chat with [Chris Apland], their head of 3D Printing. Earlier in the week, the company had just announced preorders for their new $169 delta-style 3D printer called the MP Mini Delta.

[Brian Benchoff] covered that launch and I don’t have a lot of details about the machine itself to add. I saw it in action, printing tiny waving cat models. The stock printer can use ABS or PLA and has a build volume of 110mm in diameter and 120mm tall and these preorder units (being sold through Indegogo) will begin shipping in August.

What was of interest is to hear the shipping estimates the Monoprice team is throwing around. Chris told me that their conservative estimate is that 20,000 of these printers will ship through this preorder, but he is optimistic that by the end of the fourth quarter they’ll be closer to 100,000 units. That is incredible.

Part of the promise here is the out of the box functionality; [Chris] mentioned having a printed cat in your hands within 5 minutes. If it can actually do that without the need for setup and calibration that’s impressive. But I know that even seasoned printing veterans are interested in seeing how fast they can run this tiny delta and still turn out quality prints.

You’ll find the video interview after the break.

END_OF_DOCUMENT_TOKEN_TO_BE_REPLACED 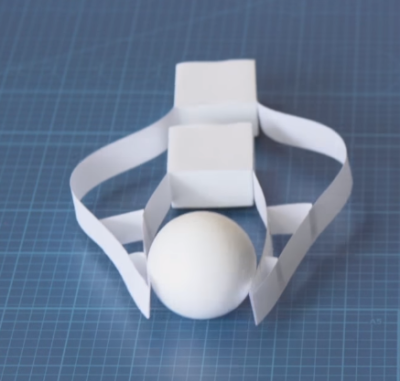 END_OF_DOCUMENT_TOKEN_TO_BE_REPLACED

What if you could build a clock that displays time in the usual analog format, but with the hands moving around the outside of the dial instead of rotating from a central point? This is the idea behind TORLO, a beautiful clock built from 3D printed parts.

The clock is the work of [ekaggrat singh kalsi], who wanted to build a clock using a self-oscillating motor. Initial experiments had some success, however [ekaggrat] encountered problems with the motors holding consistent time, and contacts wearing out. This is common in many electromechanical systems — mechanics who had to work with points ignition will not remember them fondly. After pushing on through several revisions, it was decided instead to switch to an ATtiny-controlled motor which was pulsed once every two seconds. This had the benefit of keeping accurate time as well as making it much easier to set the clock.

The stunning part of the clock, however, is the mechanical design. The smooth, sweeping form is very pleasing to the eye, and it’s combined with a beautiful two-tone colour scheme that makes the exposed gears and indicators pop against the white frame. The minute and hour hands form the most striking part of the design — the indicators are attached to a large ring gear that is turned by the gear train built into the frame. The video below the break shows the development process, but we’d love to see a close-up of how the gear train meshes with the large ring gears which are such an elegant part of the clock.

END_OF_DOCUMENT_TOKEN_TO_BE_REPLACED 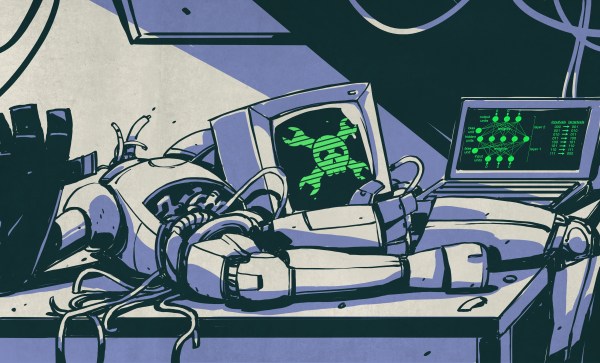 Things have gotten freaky. A few years ago, Google showed us that neural networks’ dreams are the stuff of nightmares, but more recently we’ve seen them used for giving game character movements that are indistinguishable from that of humans, for creating photorealistic images given only textual descriptions, for providing vision for self-driving cars, and for much more.

Being able to do all this well, and in some cases better than humans, is a recent development. Creating photorealistic images is only a few months old. So how did all this come about?

END_OF_DOCUMENT_TOKEN_TO_BE_REPLACED

According to Russian security site [Dr.Web], there’s a new malware called Linux.MulDrop.14 striking Raspberry Pi computers. In a separate posting, the site examines two different Pi-based trojans including Linux.MulDrop.14. That trojan uses your Pi to mine  some form of cryptocurrency. The other trojan sets up a proxy server.

According to the site:

Linux Trojan that is a bash script containing a mining program, which is compressed with gzip and encrypted with base64. Once launched, the script shuts down several processes and installs libraries required for its operation. It also installs zmap and sshpass.

In addition, the malware searches for network machines with open port 22 and tries to log in using the default Raspberry Pi credentials to spread itself.

Embedded systems are a particularly inviting target for hackers. Sometimes it is for the value of the physical system they monitor or control. In others, it is just the compute power which can be used for denial of service attacks on others, spam, or — in the case —  mining. We wonder how large does your Raspberry Pi botnet needs to be to compete in the mining realm?

We hope you haven’t kept the default passwords on your Pi. In fact, we hope you’ve taken our previous advice and set up two factor authentication. You can do other things too, like change the ssh port, run fail2ban, or implement port knocking. Of course, if you use Samba to share Windows files and printers, you ought to read about that vulnerability, as well.