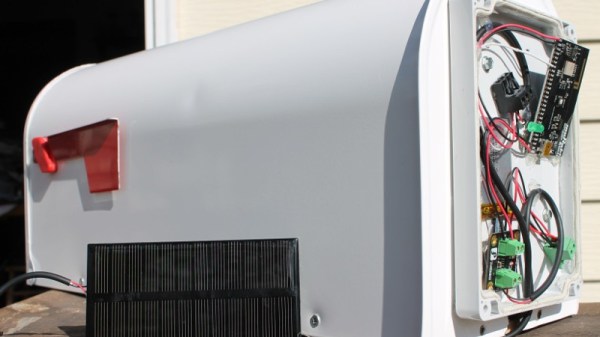 Life is full of tough decisions, such as deciding whether you want to go to the end of the drive to check if the mail has arrived. These questions are made even more arduous in the winter months, but [Catpin] has a solution. The Mail Box Alert uses an Electric Imp, a solar panel and a proximity sensor to let you know if you’ve got mail. 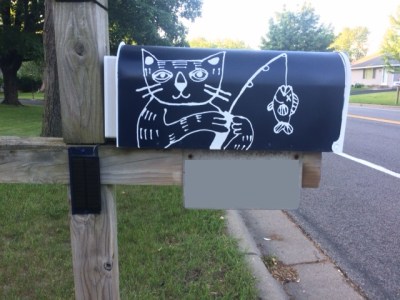 It’s a neat build, with the brains provided by that Electric Imp which handles most of the heavy lifting. This wakes up every five minutes and checks whether the status of a small proximity sensor has changed. If it has, it pings a website. The unit sits at the bottom of the postbox, so if your friendly neighborhood post person has put in any letters, it will have changed. The Imp is powered by a small battery, which is in turn charged by a solar panel. That means that it doesn’t require any power cables or other wiring, as long as it is in the range of WiFi. With the addition of a 15-hours overnight deep sleep, [Catpin] found that the whole thing could be run from a couple of 18650 LiPo batteries.

Perhaps the most interesting part of the writeup was discussing the problems that he found with the build, such as the fact that a LiPo battery won’t perform that well in a Wisconsin winter. So, this was replaced with a Lithium Iron Phosphate battery that should be a bit more tolerant of the chill. There is also a writeup on how to create the same project using an ESP8266 if required. 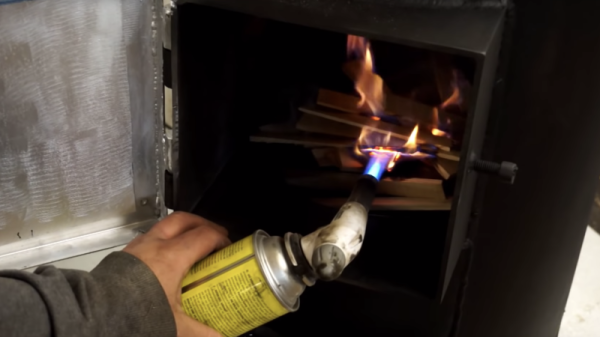 For poor [workshop from scratch], winter brings the joy of a cold workshop. Since the building is structurally made from tin, warming up the room is difficult.

Naturally, the solution was to construct a homemade wood furnace. The build starts off with an angle grinder being taken to a compressed air tank. After sawing off the top and sanding down the edges, the builder slices out an opening and welds together some rods into a stand for the center. He then proceeds to weld some external frames for the furnace, as well as a chimney stack, some nifty covers joined by hinges, and a fan/temperature regulator to keep the fire going.

Most of the pieces seem to come from scrap metal lying around the workshop, although the degree to which the entire project comes together is quite smooth. Some filter and spray paint do the trick for cleaning up the furnace and making it look less scrappy. The last step? A stack of wooden logs and a blow torch to start the fun. Outside of the furnace, an LCD screen keeps track of the temperature, giving some feedback and control.

The result is perhaps a too effective at warming up the workshop, but the problem sure is solved!

END_OF_DOCUMENT_TOKEN_TO_BE_REPLACED

There is a potential downside to open source that is highlighted here. Open source allows poorly written code to spread. This isn’t a knock against open source, but rather a warning to the reader. Just because code or a project uses an OSS license doesn’t mean it’s secure or high quality code. There are more vulnerabilities still in the process of being fixed, so watch out for the rest of this story. END_OF_DOCUMENT_TOKEN_TO_BE_REPLACED 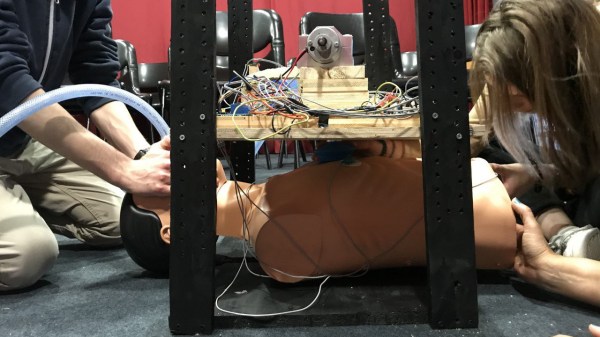 Four highschool students in Lyon France are building a CPR robot, with the aim of removing the endurance problem faced by those delivering this form of essential first aid.

By every after action report, CPR is an emotionally and physically exhausting way to save a life. When someone’s heart stops beating their breathing stops too. After that there’s a very small window in which to keep just enough oxygen in the blood to prevent brain damage and organ failure. A person has to precisely position their hands and press, repeatedly, with enough force to break someone’s sternum in order to keep their heart pumping; sometimes for over fifteen minutes waiting for rescue to arrive. On top of that, depending on which school of thought they learned the technique, they may be required to also force air into the patients lungs.

While this pushes the boundary of human endurance, a robot would not have the same issue. In fact, many of the existing problems are solved. CPAP Machines can force air into lungs all day long. A motor and a mechanism could position and provide the mechanical pumping motion to keep the blood flowing. Sensors could tell when the heart takes back over. The machine is currently a proof-of-concept built from plywood, and off-the-shelf parts. Yet it can maintain the 30 compression – 2 breath cycle indefinitely on a CPR Dummy.

It’s an interesting idea; while defibrillators do exist, they don’t always get the heart going in time. We wonder if someone more medically inclined can weigh in on this interesting idea. 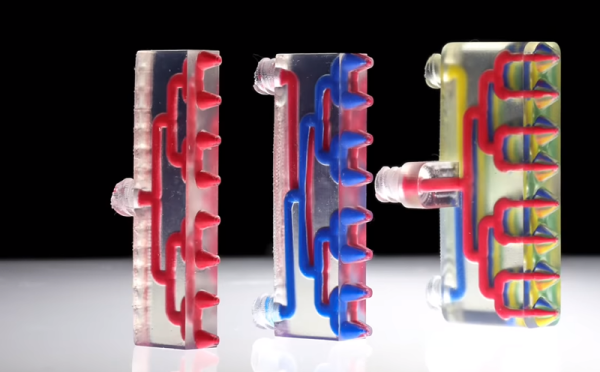 When you zoom in on a fractal you find it is made of more fractals. Perhaps that helped inspire the Harvard 3D printers that have various arrays of mixing nozzles. In the video below you can see some of the interesting things you can do with an array of mixing nozzles. The coolest, we think, is a little multi-legged robot that uses vacuum to ambulate across the bench. The paper, however, is behind a paywall.

There are really two ideas here. Mixing nozzles are nothing new. Usually, you use them to mimic a printer with two hot ends. That is, you print one material at a time and purge the old filament out when switching to the new filament. This is often simpler than using two heads because with a two head arrangement, both the heads have to be at the same height, you must know the precise offset between the heads, and you generally lose some print space since the right head can’t cross the left head and vice versa. Add more heads, and you multiply those problems. We’ve also seen mixing nozzles provide different colors.

END_OF_DOCUMENT_TOKEN_TO_BE_REPLACED 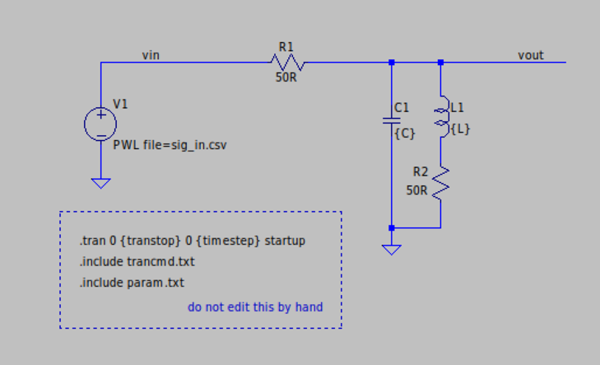 Using SPICE to simulate an electrical circuit is a common enough practice in engineering that “SPICEing a circuit” is a perfectly valid phrase in the lexicon. SPICE as a software tool has been around since the 70s, and its open source nature means there are more SPICE tools around now to count. It also means it is straightforward enough to use with other software as well, like integrating LTspice with Python for some interesting signal processing circuit simulation.

[Michael]’s latest project involves simulating filters in LTspice (a SPICE derivative) and then using Python/NumPy to both provide the input signal for the filter and process the output data from it. Basically, it allows you to “plug in” a graphical analog circuit of any design into a Python script and manipulate it easily, in any way needed. SPICE programs aren’t without their clumsiness, and being able to write your own tools for manipulating circuits is a powerful tool.

This project is definitely worth a look if you have any interest in signal processing (digital or analog) or even if you have never heard of SPICE before and want an easier way of simulating a circuit before prototyping one on a breadboard. 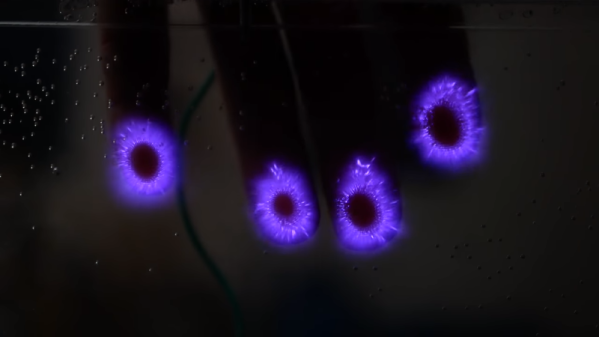