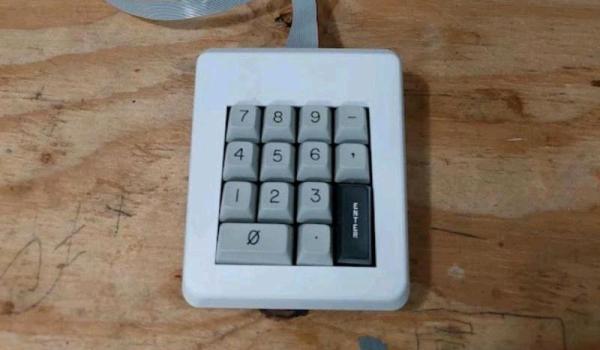 [Evan] already had a working ADM-3A (a dumb terminal from 1976) but was starting to eye the accessories hungrily. He had only seen the numpad on Wikipedia and in the manual. So when he found some authentic stackpole numpads on a surplus sale, he grabbed them and converted them to be ADM-3A compatible.

Looking at the schematic for the ADM-3A, [Evan] figured out that the numpad was parallel to the keyboard matrix, not adjacent. This meant that pressing a five on the keyboard was electrically equivalent to pressing a five on the keyboard. So holding shift while punching on the numpad leads to some unexpected characters for those of us used to more modern keyboards. Since [Evan] only needed to make one or two of these, he soldered wires directly to switch contacts in the matrix that the ADM-3A expects. A 3d printed housing, some rubber feet, and a ribbon cable later, it was done. While it looks slightly different from the original, the vibe is right, and given that it is a stackpole switch, it has the same feel. With the spare numpads, he created a replacement PCB that runs QMK and connects to a more modern computer via USB-C. The files for the 3d printed housing are also up on GitHub, along with the PCBs and QMK configuration files.

If you’re interested in what more you can do with an ADM-3A, why not hook it up to a Raspberry Pi? 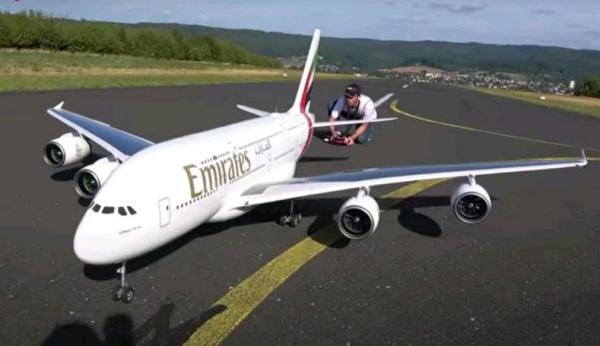 A year ago [Ramy RC] set out on a momentous challenge: to build a 1:21 scale Airbus A380-800 RC model with functional engines, landing gear and all other details. Recently he finished the project and published a video with a summary of the whole build process (also linked below). The full video series can be found on the Ramy RC channel. The final RC airplane came out at a massive wingspan of 3.9 meters (12.7′), a length of 3.6 meters (11.8′) and a weight of 25 kg. This weight is carried by the full landing gear of multiple bogeys that can retract much like on the real airplane.

A range of materials were used for the body, including carbon fiber and wood, with each part carefully modeled with CAD software and 3D-printed or cut on a CNC cutter. Four ducted fans provide the propulsive power that lift this enormous model airplane into the skies, which is the only part where the noise profile doesn’t quite match that of the real A380. Even so, seeing the airplane taxing, taking off and flying through the skies makes you look twice to realize that it is in fact a scale model and not a real Emirates A380-800, also courtesy of the excruciating amount of detail to the model’s final look, down from the logos to the silver-grey lines.

We’re also quite convinced that the maiden flight of such an exquisite model has to be one of the most terrifying experiences imaginable.

END_OF_DOCUMENT_TOKEN_TO_BE_REPLACED

Something odd is afoot in the mountains around Salt Lake City, Utah, at least according to local media reports of remote radio installations that have been popping up for at least the past year. The installations consist of a large-ish solar panel, a weatherproof box full of batteries — and presumably other electronics, including radios — and a mast bearing at least one antenna. Local officials aren’t quite sure who these remote setups belong to or what they’re intended to do, but the installations obviously represent a huge investment in resources.

The one featured in the story was located near the summit of Twin Peaks, which is about 11,000 feet (3,300 meters) in elevation, which with that much gear was probably a hell of a hike. Plus, the owner took great pains to make sure the site would withstand the weather, with antenna mast guy wires that must have required lugging a pretty big drill up with them. There aren’t any photos of the radios in the enclosure, but one photo shows a 900-MHz LORA antenna, while another shows what appears to be a panel antenna, perhaps pointing toward another site. So maybe a LORA mesh network? Some comments in the Twitter thread show most people are convinced this is a Helium crypto mining rig, but the Helium Explorer doesn’t show any hotspots listed in that area. Either way, the owners are out of luck, since their gear is being removed if it’s on public land.

END_OF_DOCUMENT_TOKEN_TO_BE_REPLACED

The current hotness is anything to do with artificial intelligence, and along with some interesting experiments comes a lot of mindless hype. The question is, what can it do for us! [Jesse] provides a fun answer by asking ChatGPT to perform as a Dungeons and Dragons dungeon master.

There are many ways to approach a game of D&D, and while some take the whole thing very seriously indeed we prefer to treat it as a lightly inebriated band of intrepid heroes smacking each other and assorted monsters with imaginary swords and war hammers. Would the AI follow the nerdiest cliches to their pedantic conclusions, or would it sense that the point of a game is to have fun?

END_OF_DOCUMENT_TOKEN_TO_BE_REPLACED

It’s an unfortunate reality these days that if you see a cheap piece of consumer electronics, there’s a good chance its only cheap because it’s designed to lock you into some ecosystem where you’ll either end up paying a subscription, or worse, have your personal information sold behind your back. One of the best tools we have against these sort of anti-consumer practices is the development of open source firmware replacements that put control of the device into the hands of the community, rather than a corporation.

Now, thanks to the work of [Jonathan Armstrong] we have such a firmware for the 433 MHz magnetic door and window sensors that you can pick up on AliExpress for $4 USD a piece. The new firmware not only ensures you can use these sensors with a wide array of receivers, but adds a number of new features over their stock configuration. END_OF_DOCUMENT_TOKEN_TO_BE_REPLACED 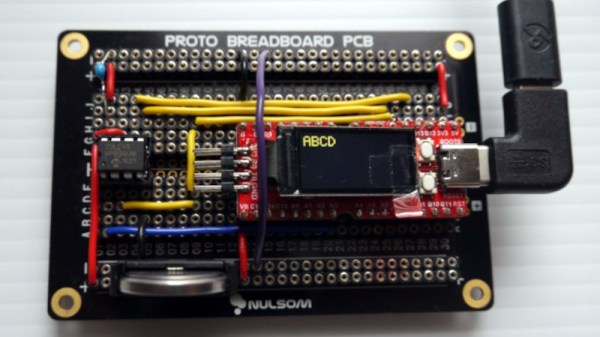 Over the decades there have been many programming languages, some of which have flowered briefly, and others that have stuck around despite newer, better, and faster competition. Few languages embody this last group more than FORTH, over five decades old and still cropping up wherever a simple, elegant, fast, and compact stack-based programming language fits the bill. [Alexander Williams] has now taken it somewhere new, with a FORTH in RISC-V assembly which runs on the GD32 series of microcontrollers that are RISC-V lookalikes of the popular STM32 ARM parts.

We have to admit to last having used FORTH on an 8-bit home computer in the 1980s, aside from a moment’s idle play on discovering that the Open Firmware on Apple computers is a FORTH interpreter. Thus we’re intrigued by this implementation, but not from a position of FORTH expertise. We’d expect such an efficient language to be extremely quick though, so it’s definitely something to keep an eye on for when a suitable dev board comes our way. If it interests you, take a look at the GitHub repository. 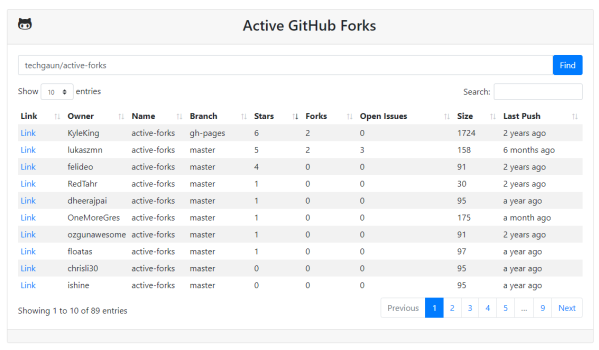 An fortunate reality of GitHub and similar sites is that projects that are abandoned by the maintainer are often continued by someone else who forked the project. Unfortunately, the ease of forking also means that GitHub projects tend to have a lot of forks, with the popular projects having hundreds of them. Since GitHub has elected to not provide a way to filter or sort these forks, finding the most active fork can be rather harrowing.

In addition, a popular project’s dead repository tends to score higher in search results than replacement forks. For these particular situations a couple of very useful websites and browser add-ons have been developed. The Lovely Forks add-on by [Utkarsh Upadhyay] seeks to insert information on forks that are notable or newer than the repository one is looking at.

Meanwhile, the Active Forks project by [Samar Dhwoj Acharya] provides a sortable list of project forks when provided with a GitHub repository name. This helps enormously when trying to find the freshest forks in a whole list. This is similar to the Useful Forks project that provides a web-based interface in addition to a Chrome extension. Do note that these queries will count towards the GitHub API rate-limits, so you may need to add an access token.

It’s a shame that GitHub doesn’t offer such functionality by default, but thanks to these projects the times of clicking through a hundred forks to find the freshest one is at least over. For now.