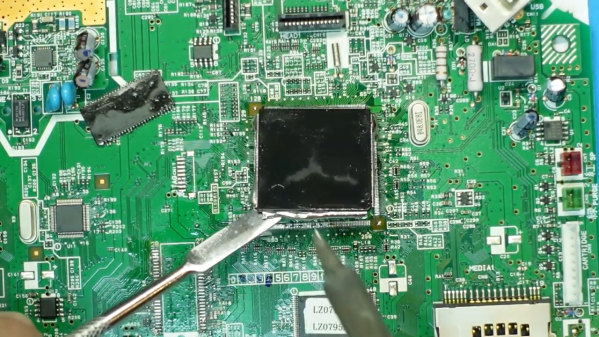 Any video that starts with a phase diagram has instantly earned our attention. Admittedly, we have a pretty low bar for that kind of stuff, but eye candy aside, [Robin Debreuil]’s quick outline of his technique for desoldering with the help of bismuth is worth watching.

Aside from its use in those pink gloopy solutions one takes for an upset stomach, bismuth has a lot of commercial applications. For the purposes of desoldering, though, its tendency to lower the melting point of tin and tin alloys like solder is what makes it a valuable addition to the toolkit. [Robin] starts with a demonstration of just how far a little bismuth depresses the melting point of tin solder — to about 135°. That allows plenty of time to work, and freeing leads from pads becomes a snap. He demonstrates this with some large QFP chips, which practically jump off the board. He also demonstrates a neat technique for cleaning the bismuth-tin mix off the leads, using a length of desoldering braid clamped at an angle to the vertical with some helping-hands clips. The braid wicks the bismuth-tin mix away from the leads along one side of the chip, while gravity pulls it down the braid to pool safely on the bench. Pretty slick.

Lest leaded solder fans fret, [Robin] ensures us this works well for lead-tin solder too. You won’t have to worry about breaking the bank, either; bismuth is pretty cheap and easily sourced. And as a bonus, it’s pretty non-toxic, at least as far as heavy metals go. But alas — it apparently doesn’t machine very well.

END_OF_DOCUMENT_TOKEN_TO_BE_REPLACED 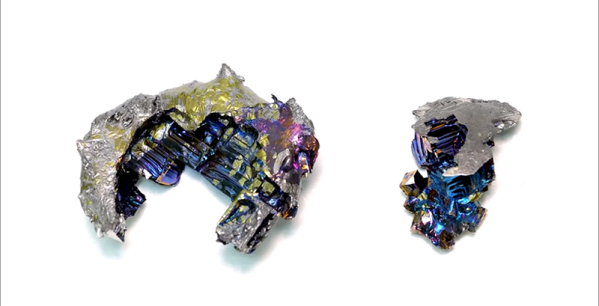 Bismuth is a very odd metal that you see in cosmetic pigments and as a replacement for lead, since it is less toxic. You will also see it — or an alloy — in fire sprinklers since it melts readily. However, the most common place you might encounter bismuth is Pepto Bismol — the ubiquitous pink liquid you use when your stomach is upset. [NileRed] tried extracting the bismuth from Pepto Bismol some time ago, but didn’t get good results. He decided that even though the process would not be cost-effective he wanted to try again, and you can see the crystals produced in the video below.

It turns out that you don’t need the pink liquid brand name. [Red Nile] started with ten boxes of generic chewable tablets — that’s 480 pills. A little bit of dilute hydrochloric acid eats the pills apart and generates a few reactions that he explains in the video.

END_OF_DOCUMENT_TOKEN_TO_BE_REPLACED 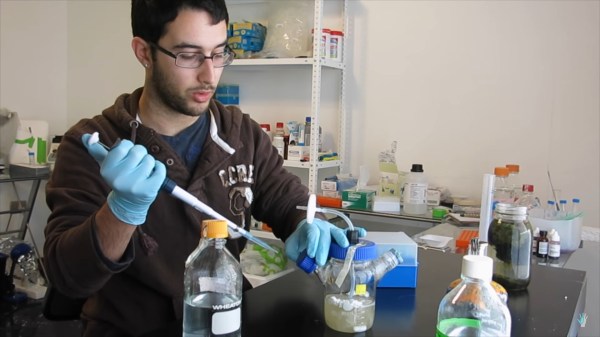 Our friends at [The Thought Emporium] have been bringing us delightful projects but not all of them warrant a full-fledged video. What does anyone with a bevy of small but worthy projects do? They put them all together like so many mismatched LEGO blocks. Grab Bag #1 is the start of a semi-monthly video series which presents the smaller projects happening behind the scenes of [The Thought Emporium]’s usual video presentations.

Solar eclipse? There are two because the first was only enough to whet [The Thought Emporium]’s appetite. Ionic lifters? Learn about the favorite transformer around the shop and see what happens when high voltage wires get too close. TEA lasers? Use that transformer to make a legitimate laser with stuff around your house. Bismuth casting? Pet supply stores may have what you need to step up your casting game and it’s a total hack. Failures? We got them too.

We first covered ionocraft (lifters) awhile back. TEA lasers have been covered before. Casting is no stranger to hackaday but [The Thought Emporium] went outside the mold with their technique.

END_OF_DOCUMENT_TOKEN_TO_BE_REPLACED

[David Cook]’s summary below the write-up of his experiences working with a bismuth ingot is succinct.

“I wasted a weekend learning why elemental bismuth is not commonly used for metal parts.“

It’s a fair assessment of his time spent growing unspectacular bismuth crystals, casting a bismuth cylinder that cracked, and machining bismuth only to be left with a very rough finish. But even though he admits the exercise was unsuccessful, he does provide us with a fascinating look at the physical properties of the element.

Bismuth is one of those elements you pass by in your school chemistry lessons, it has applications in machining alloys and as a lead replacement but most of us have never knowingly encountered it in the real world. It’s one of the heavy metals, below antimony and to the right of lead on the Periodic Table. Curious schoolchildren may have heard that like water it expands on solidifying or that it is diamagnetic, and most of us have probably seen spectacular pictures of its crystals coated in colourful iridescent oxides.

It was a Hackaday story about these crystals that attracted [David] to the metal. It has a low enough melting point – 271.5 °C – that it can be liquified on a domestic stove, so mindful of his marital harmony should he destroy any kitchen appliances he bought a cheap electric ring from Amazon to go with his bismuth ingot. and set to work.

His first discovery was that cheap electric rings outdoors aren’t very effective metallurgy furnaces. Relocating to the kitchen and risking spousal wrath, he did eventually melt his bismuth and pick off the top layer once it had resolidified, to reveal some crystals.

Unfortunately for him, instead of spectacular colors and huge crystals, the sight that greeted him was one of little brilliance. Small grey crystals with no iridescence. It seems the beautiful samples are made by a very slow cooling of the liquid bismuth, followed by a quick pouring off of the remaining molten metal. Future efforts, he assures us, will involve sand-insulated molds and careful temperature monitoring.

Undeterred, he continued with his stock of bismuth and embarked on the creation of a cylinder. Early efforts with a clay mold resulted in cracked cylinders, so in desperation he cast the entirety of the metal in an aluminium baking tray and cut the resulting ingot to a rough piece of stock for turning.

With the bismuth in the lathe, he then came face to face with what he alluded to in his conclusion above, why machined bismuth parts aren’t something you’ll encounter. His cylinder came out with significantly rough patches on the surface, because bismuth is both crystalline and brittle. He suggests improvements could be made if the metal could be solidified with fewer crystals, but it’s obvious that elemental bismuth on its own is not a winner in the turning stakes.

We suggest you take a look at [David]’s write-up. It may be presented as a Fail of The Week here, but in fact it’s more of a succession of experiments that didn’t work than an unmitigated disaster. The result is an interesting and well-documented read that we’re sure most Hackaday readers will gain something from.

Aside from the bismuth crystals linked to above, we’ve featured bismuth a few times here at Hackaday. A low-temperature soldering process used it in an alloy, and we’ve even featured someone using it in another alloy to print using a RepRap.

Thanks [nebk] for the tip.

Have you ever seen the science experiment (or magic trick?) where you get water supercooled to where it isn’t frozen, but then it freezes when you touch it, pour it, or otherwise disturb it? Apparently, ice crystals form around impurities or disturbances in the liquid and then “spread.” A similar effect can occur in metals where the molten metal cools in such a way that it stays melted even below the temperature that would usually cause it to melt.

[Martin Thuo] at Iowa University used this property to make solder joints at room temperature using Field’s metal (a combination of bismuth, indium, and tin). The key is a process that coats the molten metal with several nanolayers that protect it from solidifying until something disturbs the protective layer.