If you’re looking for a simple project to start exploring the intersection of OpenCV and robotics, then the RPi Tank created by [Vishal Varghese] might be a good place to start. A Raspberry Pi and a few bits of ancillary hardware literally taped to the top of a toy M1 Abrams tank becomes a low-cost platform for testing out concepts such as network remote control and visual line following. Sure, you don’t need to base it around an Abrams tank, but if you’re going to do it you might as well do it with style.

As this is more of a tech demonstrator, the hardware details are pretty minimal. [Vishal] says you just need a relatively recent version of the Raspberry Pi, a MotoZero motor controller, and a camera module. To provide juice for the electronics you don’t need anything more exotic than a USB power bank, which in his case has been conveniently attached to the top of the turret. He doesn’t provide exact details on how the MotoZero gets wired into the Abram’s motors, but we imagine it’s straightforward enough that the average Hackaday reader probably doesn’t need it spelled out for them.

Ultimately, the software is the heart of this project, and that’s where [Vishal] really delivers. He’s provided sample Python scripts ordered by their level of complexity, from establishing a network connection on the Raspberry Pi to following a line of tape on the ground. Whether used together or examined individually, these scripts provide a great framework to get your first project rolling. Literally.

Line following robots, in their many forms, have been a favorite hacker project for years. Whether they home in with an analog circuit or replace the lines with hidden wires, they’re a great way to get started with semi-autonomous robotics.

[Sebastian Goscik]’s entry in the 2017 Hackaday Prize is a line following robot. Well, not really; the end result is a line following robot, but the actual project is about a simple, cheap robot chassis to be used in schools, clubs, and other educational, STEAM education events. Along with the chassis design comes a lesson plan allowing teachers to have a head start when presenting the kit to their students.

The lesson plan is for a line-following robot, but in design is a second lesson – traffic lights which connect to a main base through a bus and work in sync. The idea of these lessons is to be fairly simple and straightforward for both the teachers and the students in order to get them more interested in STEM subjects.

What [Sebastian] noticed about other robot kits was that they were expensive or complicated or lacked tutorials. Some either came pre-assembled or took a long time to assemble. [Sebastian] simplified things – The only things required after the initial assembly of the chassis are: Zip-ties, electrical tape and a few screws. The PCB can’t be disassembled, but the assembled PCB can be reused.

The hardware [Sebastian] came up with consists of some 3mm material that can be laser cut (acrylic or wood) and a sensor board that has 5 IR LEDs and corresponding IR sensors. The chassis can be put together using nothing more than a Phillips screwdriver, and the sensor PCBs are well documented so that soldering them is as easy as possible. An Arduino is used as the brains of the unit.

[Sebastian] has come up with a great project and the idea of a platform like this with a couple of lesson plans included is a great one. He’s released the hardware under an Open Hardware license as well so others can share and add-on. Of course, there are other line following robots, like this miniature one created with analog circuitry, and there are other open source robots for teaching, like this one. But [Sebastian]’s focus on the lesson plans is a really unique way of approaching the problem – one that will hopefully be very successful.

END_OF_DOCUMENT_TOKEN_TO_BE_REPLACED

Puma believes that actually running against a competitor, even a robot, improves performance more than just running against the clock. They’re betting a grown-up line follower will help Olympic class athletes improve their performance. END_OF_DOCUMENT_TOKEN_TO_BE_REPLACED 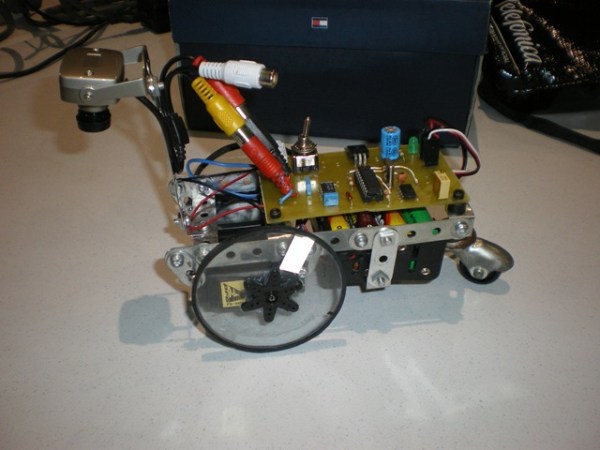