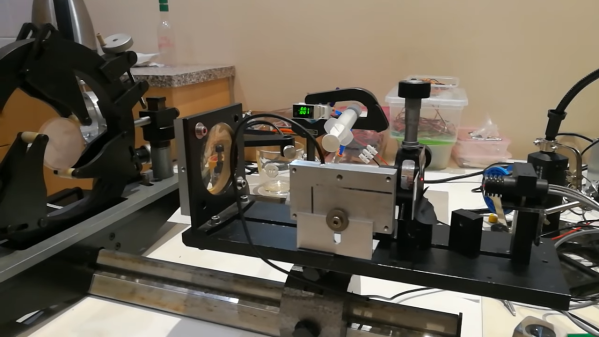 END_OF_DOCUMENT_TOKEN_TO_BE_REPLACED

If ever any sci-fi robot form-factor made more sense than the Droideka of the Star Wars franchise, we’re not sure what it could be. Able to transform from a spheroid that rolls quickly onto the battlefield into a blaster-bristling tripodal walker, the Hollywood battle droid showed a lot of imagination and resulted in a remarkably feasible design. And now that basic design is demonstrated in a spherical quadrupedal robot that can transform from rolling to walking.

Intended as a proof of concept of a hybrid rolling-walking locomotion system, the QRoSS robot from Japan’s Chiba Institute of Technology is capable of some pretty amazing things already. Surrounded by a wire roll cage that’s independent of the robot’s legs, QRoSS is able to roll into position, unfurl its legs, and walk where it needs to go. Four independent legs make it sure-footed over rough terrain, with obvious applications in such fields as urban search and rescue; a hardened version could be tossed into a collapsed building or other dangerous environment and walk around to provide intelligence or render aid. The robot’s self-righting feature would be especially handy for that use case, and as you can see in the video below, it has a powered rolling mode that’s six times faster than its walking speed.

For a similar spherical transforming robot, be sure to check out the MorpHex robot with its hexapod design.

END_OF_DOCUMENT_TOKEN_TO_BE_REPLACED 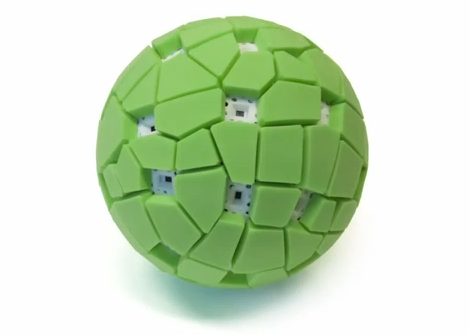 This odd-looking ball can automatically take a panoramic image whenever you throw it up into the air. Seriously, that’s then entire set of operating instructions for the device. Inside, a 3D printed frame hosts an array of 36 cellphone cameras, each capable of taking a two megapixel image. Also included is an accelerometer. When it senses the change in momentum associated with the apex of its vertical trajectory it snaps an image with all of the cameras at the same time. The result is a spherical image with no obstructions-like a tripod or other support mechanism. The images are automatically stitched together and displayed on a computer which allows the user to pan and zoom.

The whole story is told in the video after the break. The example images shown are quite good, although there are a few artifacts where the segments meet. Most notably, color variances between the images captured by different CCD modules. We’d image that this can be fixed automatically in software if a talented programmer were willing to put in the time. The thing about spherical photos is that methods using post processing to unwrap an image always have some distortion to them. With that in mind, we think the ball camera is as good a solution as we’ve seen.

END_OF_DOCUMENT_TOKEN_TO_BE_REPLACED This simple yet precise build takes your camera for a spin in order to take spherical and multi-row panorama photographs. The rig mounts to a tripod, using two servo motors for motion, producing images that can be stitched together perfectly. An Arduino handles the hardware with an LCD interface for dialing in the settings.It’s not the cheapest way to get 360 degree shots but the example images are amazing.

[Ryubin’s] experiments with spherical video continue. This time around he’s using two cameras, both with fisheye lenses, to capture 360 degree by 360 degree video. The two cameras mount back to back and each record a 360 degree vertical view in a 180 degree horizontal range. By stitching the two recordings together and synchronizing them by comparing moving objects a seamless spherical video is produced.

He’s got one more trick up his sleeve with this setup. The tripod mount has a pivot point that allows the two cameras to shoot side-by-side instead of back-to-back. This produces a hemispherical video that is stereoscopic. That’s a pretty cheap way to make this type of 3D imaging compared to some of the CES offerings.

There are a few example videos up on his webpage. If you missed it earlier this month, he’s the guy that build a spherical video setup using a light bulb.