Do you have a bunch of electronic devices that all have different styles of chargers and batteries? Of course you do, so does everyone else. While there’s been some headway made towards standardizing on USB (and more recently, USB-C) for charging, there are still plenty of gadgets out there that march to the beat of their own DC adapter. For all those devices, [Tom Barnes] has a tip for making a cheap and easy centralized charging station. 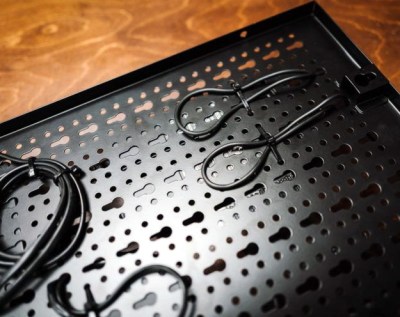 The idea is to get a power strip, ideally one that has a switch on it, and use zip ties to attach it to a piece of pegboard. [Tom] used a nice black steel board which is obviously very strong and shouldn’t be bothered by any potentially high temperatures, but you could get away with the hardware store MDF variety if you had to.

All your chargers, mounted around the periphery of the board with hook and loop fasteners, have their individual power cords run through to the back of the board where they are nearly routed and zip tied. This is where using the steel pegboard really helped, as it has a lip around the edge that makes a void for all the wires to be run through when hung on the wall. If your particular flavor of pegboard doesn’t have that space behind it, you’d either have to settle for running the wires across the front or build out your own space in the back using a wooden frame.

Even in our high-tech world, no shop is truly complete without pegboard. Whether you’re using it to vertically mount your development boards, or pushing it around on wheels to keep your tools close at hand, there’s no shortage of ways to use this versatile material.

[Colin], AKA [Domipheus], was working on a project to monitor a thermostat with a wall mounted Raspberry Pi and a touchscreen. Simple enough, but the Pi has a problem: The plugs are all around the perimeter of the board, and with a TFT touch screen shield, it’s a bit too thick to be wall mounted. What followed is a hack in the purest sense: [Domipheus] removed and relocated components on the Pi until the entire Pi/display stack was just a hair over 10mm tall.

A Raspberry Pi Model A was used for this build, meaning the Ethernet jack was gone, and there was only a single USB port to deal with. Still, the highest components – the RCA and audio jacks – were too tall and needed to be removed; they weren’t going to be used anyway.

After these components were gone, [Domipheus] turned his attention to the next tallest parts on the board: fuses, caps, and the HDMI port. For fear of damaging the surrounding components when removing the HDMI connector the right way, this part was simply hacked off. The large tantalum cap near the USB power connector was removed (it’s just a filter cap) and the large protection diode was moved elsewhere.

Slimming down a Pi is no good without a display, and for that [Domipheus] used this touchscreen thing from Adafruit. Things got a little complicated when the project required the ability to remove the LCD, but you can do amazing things with a DIP socket and a file.

The end result is a Raspberry Pi with touchscreen display that’s just a smidgen thicker than a CD case. It’ll fit right up against a wall in its repurposed enclosure, and the end result looks very professional.