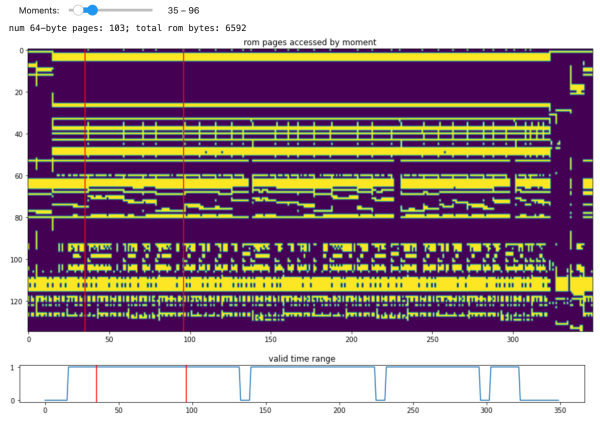 How often does this happen to you? You find yourself describing something that happened in a game to someone, and they’re not sure they know what part of the map you’re talking about, or they’ve never gotten that far. Wouldn’t it be cool to make a bookmark in a video game so you can jump right to the beginning of the action and show your friend what you mean using the actual game?

That’s the idea behind [Joël Franusic] and [Adam Smith]’s fantastic Playable Quotes for Game Boy — clip-making that creates a 4-D nugget of gameplay that can either be viewed as a video, or played live within the bounds of the clip. The system is built on a modified version of the PyBoy emulator.

Basically, a Playable Quote is made up of a save state and all that entails, plus a slice of the game’s ROM that includes just enough game data to recreate an interactive clip. Everything is zipped up and steganographically encoded into a PNG file. Here’s a Tetris quote you can play (or watch) right now — you might recognize it from the post thumbnail. You’ll find the others on the games site, which allows people to create and share and build on each other’s work.

There’s so much more that can be done with this type of immersive and interactive tool outside the realm of games, and we’re excited to see where this leads and what people do with it.

Haven’t heard of PyBoy before? Let us introduce you. 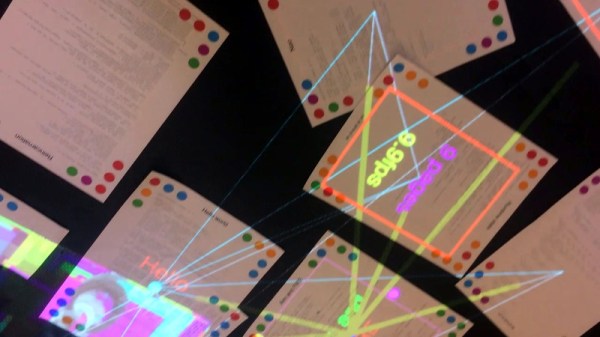 It’s a simple fact that most programs created for the personal computer involve the same methods of interaction, almost regardless of purpose. Word processors, graphics utilities, even games – the vast majority of interaction is performed through a keyboard and mouse. However, sometimes it can be fun to experiment with alternative technologies for users to interact with code – Paper Programs is an exciting way to do just that.

Paper Programs is a combination of a variety of existing technologies to create a way of interacting with code which is highly tangible. The setup consists of a projector, and a webcam which can see the projected area, combined with Javascript programs running in a browser. Programs can be edited in the browser, then printed out with special coloured dots around the page. When the page is placed in the projection area, these dots identify the unique program and are picked up by the webcam, and the server executes the relevant code, projecting back onto the page.

It’s a system that creates a very tactile way of interacting with a program – by moving the page around or placing different pages next to each other, programs can interact in various ways. The system is setup for collaboration as well, allowing users to edit code directly in the browser.

The project reminds us of earlier works on DIY multitouch screens, but with a greater focus on direct engagement with the underlying code. What other unique ways exist to interact with code? Let us know in the comments.

END_OF_DOCUMENT_TOKEN_TO_BE_REPLACED

Making computers interact with physical objects is a favorite of the HCI gurus out there, but these builds usually take the form of image recognition of barcodes or colors. Of course there are new near field communication builds coming down the pipe, but [Andrea Bianchi] has figured out an easier way to provide a physical bridge between computer and user. He’s using magnets to interact with a tablet, and his idea opens up a lot of ideas for future tangible interfaces.

Many tablets currently on the market have a very high-resolution, low latency magnetometer meant for geomagnetic field detection. Yes, it’s basically a compass but Android allows for the detection of magnets, and conveniently provides the orientation and magnitude of magnets around a tablet.

[Andrea] came up with a few different interfaces using magnets. The first is just a magnets of varying strengths embedded into some polymer clay. When these colorful magnetic cubes are placed on the tablet, [Andrea]’s app is able to differentiate between small, medium, and large magnets.

There are a few more things [Andrea]’s app can do; by placing two magnets on an ‘arrow’ token, the app can detect the direction in which the arrow is pointing. It’s a very cool project that borders on genius with its simplicity.

You can check out [Andrea]’s demo video after the break.

END_OF_DOCUMENT_TOKEN_TO_BE_REPLACED

[Alpay Kasal] of Lit Studios and [Sam Ewen] created this patent-pending interactive mirror after being inspired by dielectric glass mirrors with built-in LCD panels, and wanting to add a human touch. The end results look like a lot of fun. You can draw on the mirror and play games. According to [Kasal], mouse emulation is essential. The installation features proximity sensors and gesturing. Any game can be set up on it, which makes the possibilities endless… except these are the same people that built LaserGames so expect no further documentation about how it works.

Opto-Isolator is an interesting art installation that was on display at the Bitforms Gallery in NYC. This single movement-tracking eye creates a statement about how we view art and is a response to the question “what if art could view us?”. The somewhat creepy display not only follows the person viewing it, but mimics blinks a second later and averts its gaze if eye contact is kept up for too long. Its creators [Golan Levin] and [Greg Baltus] have done a great job mimicking human behavior with such a simple element and the social implications of it are truly fascinating.

If they wanted to, [Levin] and [Baltus] could possibly crank up the spook factor by adding facial recognition and programming it to remember how certain people interact with it, then tailor its behavior to wink at different rates or become more shy or bold, depending on the personality of the person watching it. Of course, that would require that someone goes back to it more than once…