The guts of the device are an MSP430 microcontroller, a few coin cell batteries, and a hall effect sensor that turns the device on, just like a magnetic door or window alarm. The microcontroller choice is perfect for the application; the MSP430 is extremely low power, and the device only draws 1uA in low power mode. This means the shower metronome will last a while when used only a few minutes a day.

We’re not using 9 Volt batteries to power our projects anymore; the world of hobby electronics has moved on to cheap LiPo batteries for most of our mobile power storage. LiPos aren’t the best solution, evidenced by hundreds of YouTube videos of exploding batteries, and more than a few puffy cells in our junk drawer. The solution? LiFePO4, or lithium iron phosphate cells. They’re a safer chemistry, they have low self discharge, and have more recharge than other chemistry of lithium cells.

LiFePO4 cells aren’t easy to deal with if you’re working with breadboard electronics, though. Most of that is because there aren’t many breakout boards for these cells. [Patrick] is working on changing that with his LiFePO4werd USB charger.

The concept is simple: use an off-the-shelf part for LiFePO4 batteries – in this case an MCP73123 – and make a board that charges the batteries with a USB port. It’s exactly the same idea as the many USB LiPo chargers out there, only this one uses a better battery chemistry.

[Patrick] is using a 550mAh battery for this project, but there’s no reason why it couldn’t be upgraded to a 18650-sized cell with more than 2000mAh stuffed inside. Add a boost converter to the circuit, and he’ll have the perfect power source for every portable electronics project imaginable.

When you love what you do it’s easy to let the days flow by. Now, with a milestone reached the Hackaday crew is excited to take a pause and recognize this, the 20,000th post published here. Here’s a look at the some of the highlights, and a few words on where we plan to go from here.

END_OF_DOCUMENT_TOKEN_TO_BE_REPLACED

The MeArm is a cool little robot arm that can be controlled with just about any microcontroller. There’s a new version of it up on Thingiverse.

Here’s something to get kids interested in robotics: the GoBox is a robot kit with multiple ‘missions’ delivered monthly. The robot is based on the Raspberry Pi and Scratch – the Apple II and BASIC of today, I guess.

What happens when a popular electronics YouTuber completely debunks a product? Hundreds of dislikes appear on the YouTube videos he made. Hundreds of dislikes from Vietnam appeared on [Dave Jones]’ videos debunking the Batterizer. In fact, more people from Vietnam disliked the video than viewed it. Yes, weird YouTube dislike farms like this exist, and if you can do it on the Internet, you can also pay people to do it on the Internet.

The Vintage Computer Festival Midwest was last week,  and [chris537a] shot a video of all the cool stuff. [vikram4819] put an album up on imgur. Yes, someone was selling a Sparcbook for $300. I’m holding out for a PowerPC ThinkPad, though…

Washington DC area hackers, don’t forget to RSVP for the Hackaday Meetup on Saturday. Bring a hack to show off and spend the evening socializing with the Hackaday community. Check out the announcement post for more info. 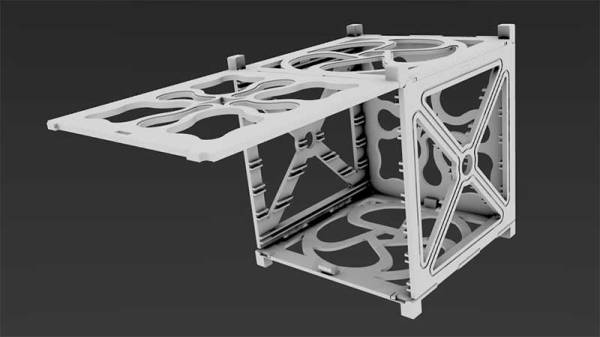 The winners are in for the GrabCad CubeSat Challenge, which asked designers to rethink the way that CubeSats are built. These tiny 10 cm square satellites are the hot thing in orbit, and the competition was looking for new ways to build and pack more into this tiny space. The winners offered some fascinating new approaches to building CubeSats, and some excellent design lessons that anyone can use.

The winner was FoldSat, by [Paolo Minetola]. His excellent design is a 3D printed folding case for a satellite that is built from just two 3D printed parts. The case can be snapped together and offers multiple ways to mount electronic components and sensors inside. [Paolo] estimates that it could save 40% time and 30% materials from existing CubeSat casings, which means more space inside and more time to build. It is an excellent example of how 3D printing can make things cheaper, easier and better, all at the same time.

END_OF_DOCUMENT_TOKEN_TO_BE_REPLACED 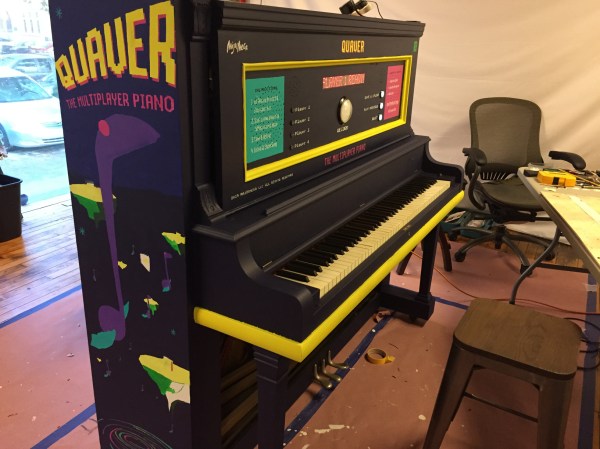 We don’t really get out much, but we have noticed that there are brightly painted upright pianos in public places these days. Research indicates that these pianos are being placed by small, independent local organizations, most of which aim to spread the joy of music and encourage a sense of community.

[Sean and Mike] took this idea a couple of steps further with Quaver, their analog looping piano. Both of them are maker/musicians based in Lancaster, Pennsylvania, which happens to be a hot spot for public pianos. [Sean and Mike] often stop to play them and wanted a good way to capture their impromptu masterpieces. Quaver is an antique upright that has been modified to record, save, loop, and upload music to the internet. It does all of this through a simple and intuitive user interface and a Raspi 2. Quaver works a lot like a 4-track recorder, so up to four people can potentially contribute to a song.

The player sits down, cracks their knuckles, and presses our personal favorite part of the interface: the giant, irresistible record button. A friendly scrolling LED matrix display tells them to start playing. Once they are satisfied, they press the button again to stop the recording, and the notes they played immediately play back in a loop through a pair of salvaged Bose speakers from the 1980s. This is just the beginning of the fun as you play along with your looping recording, building up several voices worth of song!

END_OF_DOCUMENT_TOKEN_TO_BE_REPLACED

Morse code qualifies as a digital mode, although organic brains are somewhat better at copying it than electronic ones. Ham radio operators that did “phone” (ham-talk for voice) started out with AM modulation. Sometime after World War II, there was widespread adoption of single side band or SSB. SSB takes up less bandwidth and is more reliable than AM modulation. On the digital side, hams turned to different and more sophisticated digital transmission types with computers pushing bandwidth down and reliability up. However, a recent trend has been to encode voice over ham radio–sort of VoIP with radio instead of Ethernet–using an open source program called freedv.

[AA6E] made a very informative video where he carries on a QSO (a conversation) with a distant station using freedv. What makes it interesting, is towards the end when the two stations switch to regular SSB. The difference is dramatic and really points out how even with less bandwidth (roughly 3 kHz for SSB vs 1.25 kHz), the digital mode is superior. The freedv software (available for Windows or Linux) compresses audio to 700-1600 bits per second and spreads it over 16 QPSK signals.