How would you like to have a WiFi connection that covers 10 miles? Or how about an even wider network made up of a mesh of multiple nodes? It is possible, but there is a catch: you probably need a ham radio license to do it (at least, you do in the United States).

What makes it possible is the realization that conventional WiFi channels 1-6 are inside an existing US ham band. That means (if you are a ham) you can elect to use FCC part 97 rules instead of part 15 that governs WiFi routers. That means you can use more power and–even more importantly–better antennas to get greater range.

Traditionally, hams have used custom firmware for Netgear routers or Ubiquiti hardware. However, [WZ0W] recently posted his experience using Raspberry Pi boards as mesh nodes. The code (which also works with some other single board computers) is available on GitHub (with details on the project blog). [WZ0W] points out that, unlike using a consumer router, using a Pi provides a reasonably powerful computer for hosting services as well as hosting the network.

END_OF_DOCUMENT_TOKEN_TO_BE_REPLACED 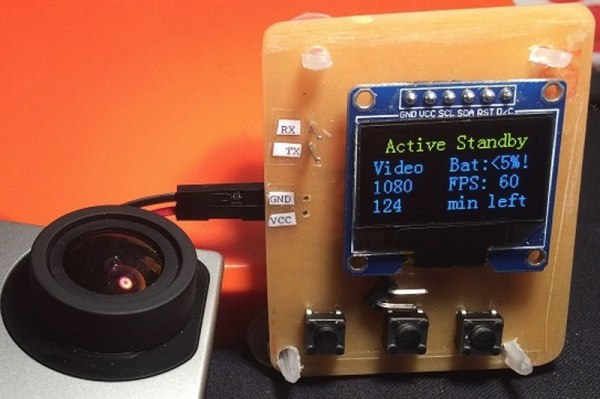 Last year we featured a GoPro camera remote by [Robert Stefanowicz] that was built around an ESP8266. [Robert] has been working hard on improving this project, and has just released version 2, which adds a screen and multiple buttons. These additions allow the remote to become a two-way device: you can use it to monitor the status of the GoPro, keeping an eye on things like the battery level and the current video mode.

[Robert] decided to make his own PCB to do this, so it’s also a good intro into the stinky art of PCB etching. He isn’t finished yet, though: he is looking to expand the project further by controlling more features on the camera using the third button on the remote.

[Julez] wanted another soldering station, so he decided to build one himself using a Hakko 907 soldering iron (or a clone). Of course, he could have bought a station, but anyone who reads Hackaday doesn’t require an explanation for why you would build something you could buy.

The station has two switchable outputs so you can use two different irons (perhaps with different tips) although you can only use one at a time. [Julez] bought a case with a transparent top from eBay and also got a digital temperature controller from eBay, which is the heart of the project. As for the actual iron, you can find clone versions of the 907 handpiece for well under $10.

Because the station uses a module, the actual wiring isn’t terribly difficult. There’s a pot to control the temperature and the controller directly connects to the iron’s heating element and temperature probe. There’s also a standby switch that reduces the temperature using a fixed resistor in series with the control pot.

END_OF_DOCUMENT_TOKEN_TO_BE_REPLACED

For the last decade or so, wireless networking has been entirely about short range, high speed communications. The type of networking needed by an Internet of things is fundamentally incompatible with WiFi, and the reason for this is due to the frequencies used by WiFi networking gear. 2.4 and 5 GHz are very fast, but cannot penetrate through walls as easily as lower frequencies.

This week the WiFi alliance introduced IEEE 802.11ah into the WiFi spec. It’s called WiFi HaLow (pronounced like angel’s headwear), and unlike other versions of 802.11, WiFi HaLow uses low frequencies for low bandwidth but a much larger range.

WiFi HaLow uses the 900 MHz ISM band to communicate, divided into 26 channels. The bandwidth is low – a mere 100 kbps, but the range is huge: one kilometer, or about four times the approximate range of 802.11n.

This is not the only WiFi spec aimed at the Internet of Things. In 2014, the WiFi alliance introduced 802.11af, a networking protocol operating in unused TV whitespace spectrum between 54 and 790 MHz. 802.11af has a similar range as 802.11ah – about one kilometer – but products and chips utilizing 802.11af have been rare and hard to find.

[Valentin]’s build has all the earmarks of an inspired afternoon of hasty hacking. Mostly built of wood and hot glue, there’s a feed ramp for fresh ammo and an elastic-powered sled on a ramp. Fireworks are metered onto the sled with one turn of a small gear motor, the fuse is light by a butane torch, and another gear motor pulls the sled back and launches the firecracker. The launch is somewhat anemic – perhaps some stouter rubber bands or latex tubing would provide a little more oomph. But it’s still a fun build with plenty of potential for improvement – perhaps something along the lines of this automated beer catapult?
END_OF_DOCUMENT_TOKEN_TO_BE_REPLACED 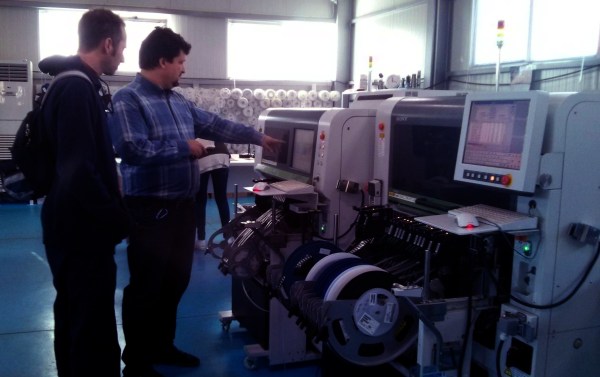 END_OF_DOCUMENT_TOKEN_TO_BE_REPLACED

Remember that old buzz wire game? Kinda like Operation, where you have to do a dexterous task without touching the walls… Well here’s a fun twist on it — what if you throw a 4 million volt stun gun into the mix?

That’s right, [Mike] was given a taser flashlight, and he had this brilliant idea to make a game out of it. The game features three metal wire sections which get progressively harder, with higher risk too! Using the handle, you have to guide an eye-bolt along the wire sections. But be careful — the circuit is live, and if you touch the metal, you’re going to get quite the shock!