Electronic tweezers – the kind that can test the voltage between two contacts, the resistance of an SMD resistor, or the capacitance of a circuit – are very cool and very useful if somewhat expensive. We’ve seen commercial versions of these smart tweezers, hacks to make them more useful, and homebrew versions that still work very well. All of these versions are pretty large, as far as tweezers go. [kodera2t]’s version of electronic tweezers submitted for this year’s Hackaday Prize goes in the other direction: it’s the smallest set of electronic tweezers that’s still useful.

[kodera]’s electronic sensing tweezers only measure capacitors, and for good reason: chip caps usually don’t have values printed on them. These tweezers don’t print out the value of a cap on a display, either. Instead, these tweezers just flash an LED if the value of the cap is above 0.1uF. It’s simple, but surprisingly useful for most soldering jobs.

The circuit for this pair of magical tweezers is about as simple as if can get, with all the smarts contained in a very small ATtiny10. The PCB [kodera] designed is smaller than the coin cell battery, and with the help of some copper tape and possibly an insulator, this device can be mounted to any pair of tweezers. It’s a simple tool, yes, but that’s the beauty of it, and makes for a great entry into the Hackaday Prize

END_OF_DOCUMENT_TOKEN_TO_BE_REPLACED 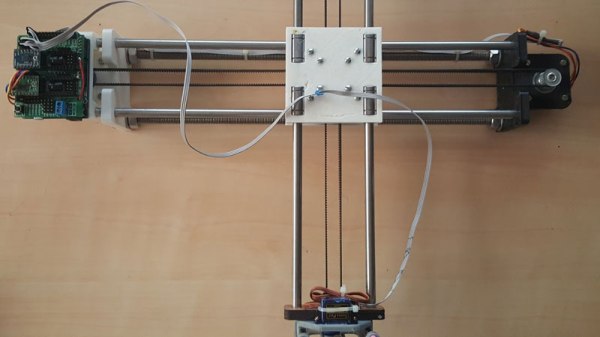 As someone who started using computers in the last century, I find the current resurgence of pen plotters somewhat nostalgic. The difference, of course, is that this century it is easier to make your own, which is what [Miguel Sanchez] is doing.

Inspired by the Axidraw, he is making his own pen plotter. He’s made great progress so far, creating a design that looks quite simple to build. His design is driven by an Arduino Uno with a stepper shield, a couple of NEMA 17 stepper motors and a servo to raise and lower the pen. Throw in a few rods, a belt or two and a number of 3D printed parts, and you’ve got a decent looking pen plotter.

He originally started with laser cut components, but shifted over to 3D printing as the design evolved. It’s not as fancy as the HP pen plotter I used to print out rude words in giant letters with in my youth (a HP7475, I think), but it is a neat build. Check it in action in the video below.

END_OF_DOCUMENT_TOKEN_TO_BE_REPLACED

Every new generation of computers repeats the techniques used by the earlier generations. [Kim Salmi] created an ASCII-based quadcopter simulation game using an Arduino that displays on the Arduino serial monitor. The modern twist is the controller: an accelerometer supplements the joystick for immersive play. And of course there are flashing LEDs.

An Arduino Uno provides the processing power and drives the serial monitor. A joystick and a Hitachi H48C accelerometer are mounted on a breadboard and wired to the Uno. The tilting of the accelerometer controls the height and left-right motion of the quadcopter on the screen. The joystick sets the the ‘copter in hover mode and lowers a ‘rescue’ line. Another LED warns when the maximum height, the vertical limit of the screen, is reached. The joystick also selects one of the three quadcopters, which have different performance characteristics.

There’s a video after the break. [Kim] provides the source code so  you use it as a reference for handling the joystick and accelerometer inputs.

More proof that what is old is new.  END_OF_DOCUMENT_TOKEN_TO_BE_REPLACED 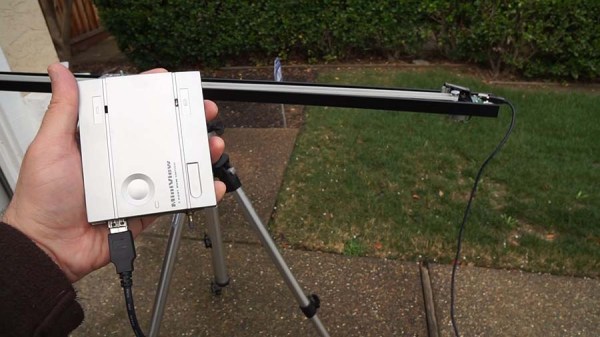 A camera slider is an accessory that can really make a shot. But when your business is photography rather than building camera accessories, quick-and-dirty solutions often have to suffice. Thus the genesis of this camera slider controller.

The photographer in question in [Paulo Renato], and while his passion may be photography, he seems to have a flair for motorized dollies and sliders. This controller is a variable-speed, reversible, PIC-based design that drives an eBay gearmotor. The circuit lives on a scrap of perfboard, and it along with batteries and a buck converter are stuffed into the case-modded remains of an old KVM switch. Push buttons salvaged from another bit of e-waste act as limit switches, and a little code provides the magic. We like the hacked nature of the controller, but we wonder about the wisdom of using the former KVM’s USB ports to connect the controller to the drivetrain; it’s all fun and games until you plug a real USB device into it. In sum, though, a nice build with nice results. Check out his other videos for more on the mechanicals.

Camera slider rigs aplenty have graced our pages, including one made mostly of wood and one controlled by a fancy iPad app.

END_OF_DOCUMENT_TOKEN_TO_BE_REPLACED

Sometimes there is no substitute for a real working model to tinker with when it comes to understanding how something works. Take a brushless motor for example. You may know how they work in principle, but what factors affect their operation and how do those factors interact? Inspired by some recent Hackaday posts on brushless motors, [Matt Venn] has built a simple breadboard motor designed for the curious to investigate these devices.

The rotor and motor bodies are laser-cut ply, and the rotor is designed to support multiple magnet configurations. There is only one solenoid, the position of which relative to the magnets on the rotor can be adjusted. The whole assembly is mounted on the edge of a breadboard, and can be rotated relative to the breadboard to vary the phase angle at which the drive circuit’s Hall-effect sensor is activated by the magnet. The drive circuit in turn can have its gain and time constants adjusted to study their effects on the motor’s running.

[Matt] has made all the design files available in his GitHub repository, and has recorded a comprehensive description of the motor’s operation in the YouTube video below the break. END_OF_DOCUMENT_TOKEN_TO_BE_REPLACED 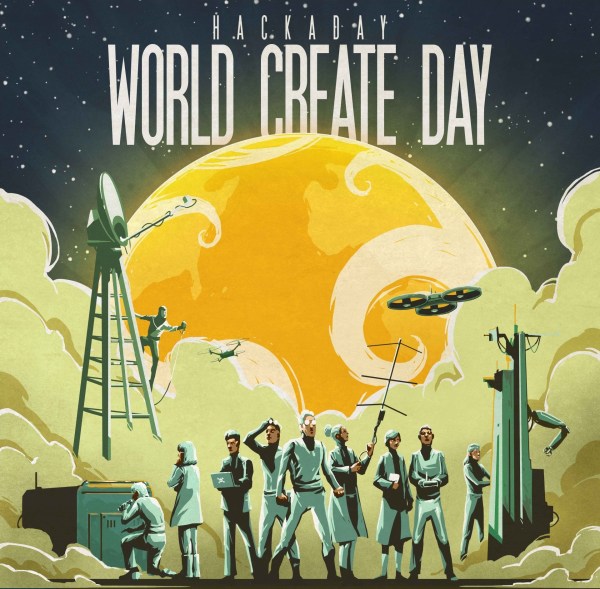 It has finally arrived, today is World Create Day which is being celebrated with Hackaday Meetups in 64 cities throughout the world.

If you are at one of these meetups, share the fun and excitement of your event today using the hashtag #WorldCreateDay. We want a taste of what is going on in your town so Tweet early and Tweet often! If you can’t be there, join in on Hack Chat and watch the projects as they come in throughout the day. If you see one you love you can even request to join the team.

We want to feature your meetup on the Hackaday front page but we need your help to do it. Make sure you take a lot of pictures, and maybe even some video. Send those along with your tale of World Create Day to: prize at hackaday email address.

If you can’t make it to a live meetup, don’t let that stop you. Design Your Concept today and submit it to the Hackaday Prize; you’ll be making it in just ahead of the Monday deadline. Follow along with the #WorldCreateDay hashtag, encouraging others and posting info about your own project.

Oh, and that amazing art at the top of this post? There’s more were that came from. See all of the designs we’ve put together for World Create Day. 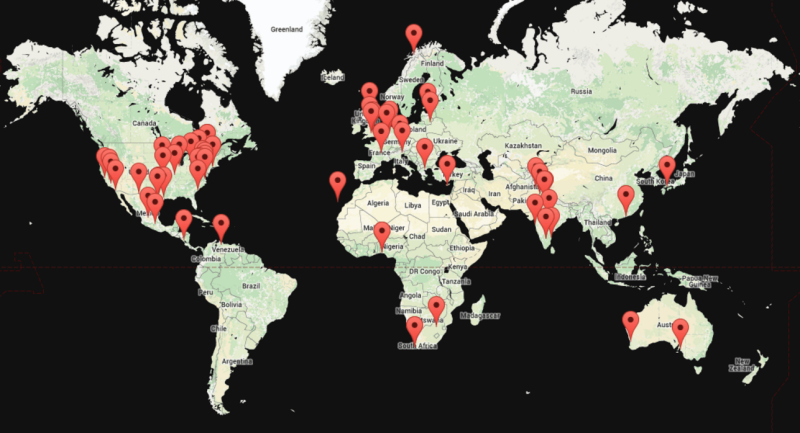